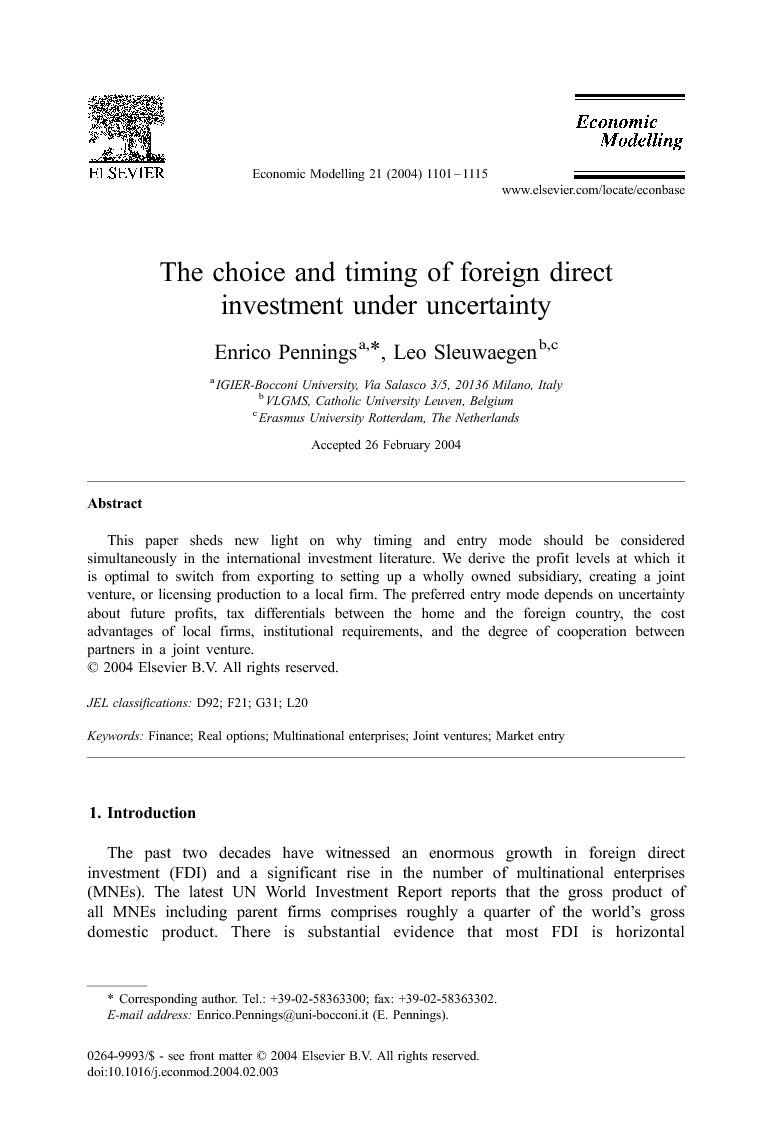 This paper sheds new light on why timing and entry mode should be considered simultaneously in the international investment literature. We derive the profit levels at which it is optimal to switch from exporting to setting up a wholly owned subsidiary, creating a joint venture, or licensing production to a local firm. The preferred entry mode depends on uncertainty about future profits, tax differentials between the home and the foreign country, the cost advantages of local firms, institutional requirements, and the degree of cooperation between partners in a joint venture.

In the absence of restrictions on the shares, the results show that a transfer payment from the local firm to the MNE while all equity is allocated to the local firm is optimal when there is a tax advantage in the host country. In other words, licensing of technology by the MNE appears the first best solution under differential taxation. An interesting feature of the cooperate model is that exclusive licensing as optimal solution encourages investment whereas licensing by the MNE as a take-it-or-leave-it offer to the local firm would severely delay investment. In the latter case namely the local firm's sunk cost consists of cJ and the licensing fee. Hence, in order to boast FDI in countries that are culturally distant and where a low degree of cooperation can be expected, the analysis in this paper suggests that full ownership (WOS) should be allowed or that investment promotion agencies, mediating between local partners and foreign investors, should be set up. We showed that there is a worst case scenario when there is no cooperation between both firms and the MNE has a full ownership in the JV. In this scenario the JV will only be set up when the profits exceed the quadratic relative markup that is optimal for a vertically integrated firm. Each firm wants to have a markup over the sunk cost of investment. This also holds true in a cooperative JV and a WOS, so the required expected after tax profit is related to the sunk cost that is required for market entry. Since the relation between expected minimum profit and the markup is positive, the findings suggest that a WOS would make higher profit than a JV when the cost of setting up a JV is higher than the cost of setting up a WOS. Kogut (1991) found that a joint venture is often followed by a sale of the local partner's share to the MNE. In our analysis, we neglected the sequential option to acquire the local company that accompanies the equity JV. Under a licensing agreement, the MNE foregoes the option to acquire. Acknowledging the option to expand, the MNE may want to wait until the project value reaches the trigger value of an equity JV, and ignore licensing. Hence, when the sequential option to acquire the local company is included, the optimal policy will not be to have a zero share, but to have a small positive share. This sheds other light on the conjecture of Svesjnar and Smith (1984) that a JV will refrain from a zero share because a low equity share would alert the host government to the problem of tax avoidance.