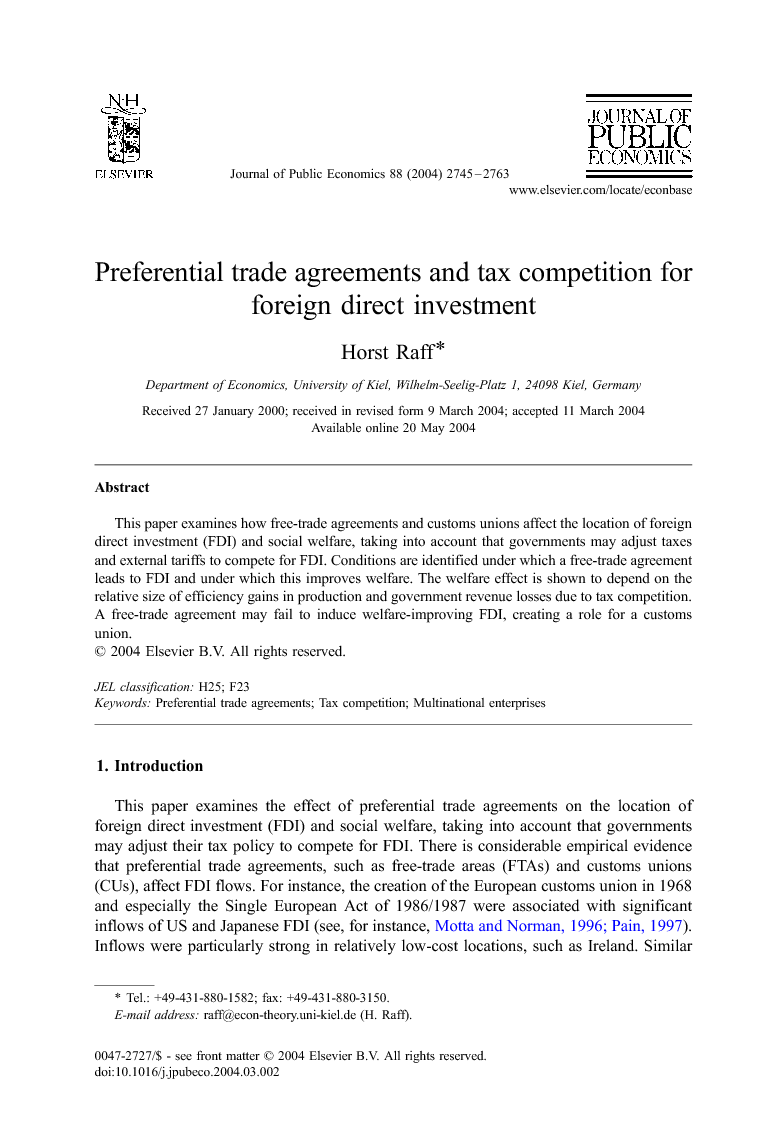 This paper examines how free-trade agreements and customs unions affect the location of foreign direct investment (FDI) and social welfare, taking into account that governments may adjust taxes and external tariffs to compete for FDI. Conditions are identified under which a free-trade agreement leads to FDI and under which this improves welfare. The welfare effect is shown to depend on the relative size of efficiency gains in production and government revenue losses due to tax competition. A free-trade agreement may fail to induce welfare-improving FDI, creating a role for a customs union.

This paper examines the effect of preferential trade agreements on the location of foreign direct investment (FDI) and social welfare, taking into account that governments may adjust their tax policy to compete for FDI. There is considerable empirical evidence that preferential trade agreements, such as free-trade areas (FTAs) and customs unions (CUs), affect FDI flows. For instance, the creation of the European customs union in 1968 and especially the Single European Act of 1986/1987 were associated with significant inflows of US and Japanese FDI (see, for instance, Motta and Norman, 1996 and Pain, 1997). Inflows were particularly strong in relatively low-cost locations, such as Ireland. Similar effects were observed in the case of the North American Free Trade Agreement (NAFTA), which particularly boosted FDI into Mexico. Some authors, including Ethier (1998), have argued that attracting FDI was in fact one of the main reasons why some countries have pursued such agreements. Many preferential trade agreements, including NAFTA, explicitly stipulate the removal of FDI review procedures and other barriers to direct investment. Another possible effect of the removal of internal trade barriers is that companies may rationalize and concentrate production in low-cost locations within the preferential trade area. This was pointed out, for instance, by the Royal Commission (1985) and Pain (1997). Empirical evidence of this effect for NAFTA is found by Niosi (1994). Given the potential of preferential trade agreements to affect the location choices of foreign investors, governments may find it tempting to intervene to try to attract new firms or to prevent existing firms from leaving. Competition for FDI especially on an intra-regional basis is well documented, and there is some evidence that it has increased in line with regional integration (Bond and Guisinger, 1985). Benassy-Quere et al. (2000) find that nominal and effective corporate tax rates in the EU have decreased in the process of European integration. According to UNCTAD (1996, Table III.1), the use of fiscal incentives, such as tax holidays, to attract FDI has increased in Europe between the mid-1980s and early 1990s.1 The study reports a similar trend in the United States and Canada. The main objectives pursued with these incentives appear to have changed as well during this period. UNCTAD (1996, Table III.4) argues that in the EU as well as in the United States and Canada more incentives were given to stimulate FDI and exports and fewer were given for sectoral development and restructuring, priority industries, and research and development. Examples of incentive-based competition in Europe are listed in Table 1. These examples suggest that multinational firms, after identifying possible locations for a project, shop around for the most attractive combination of location-specific fundamentals and incentives (see also Oman, 2000). In the UNCTAD survey, Samsung offered as key factors influencing its decision to invest in England (i) access to the European single market; (ii) high labor productivity and competitive wage rates; (iii) an attractive incentive package; and (iv) good transport infrastructure to markets. Mercedes-Benz and Swatch gave almost exactly the same reasons for their choice of locating in France, as did Ford and Volkswagen for their decision to locate in Spain. The desire to supply the European market from a single low-cost location within the EU providing significant incentives also appears in many of the other examples listed in the UNCTAD survey (UNCTAD, 1996, Boxes III.4 to III.5).