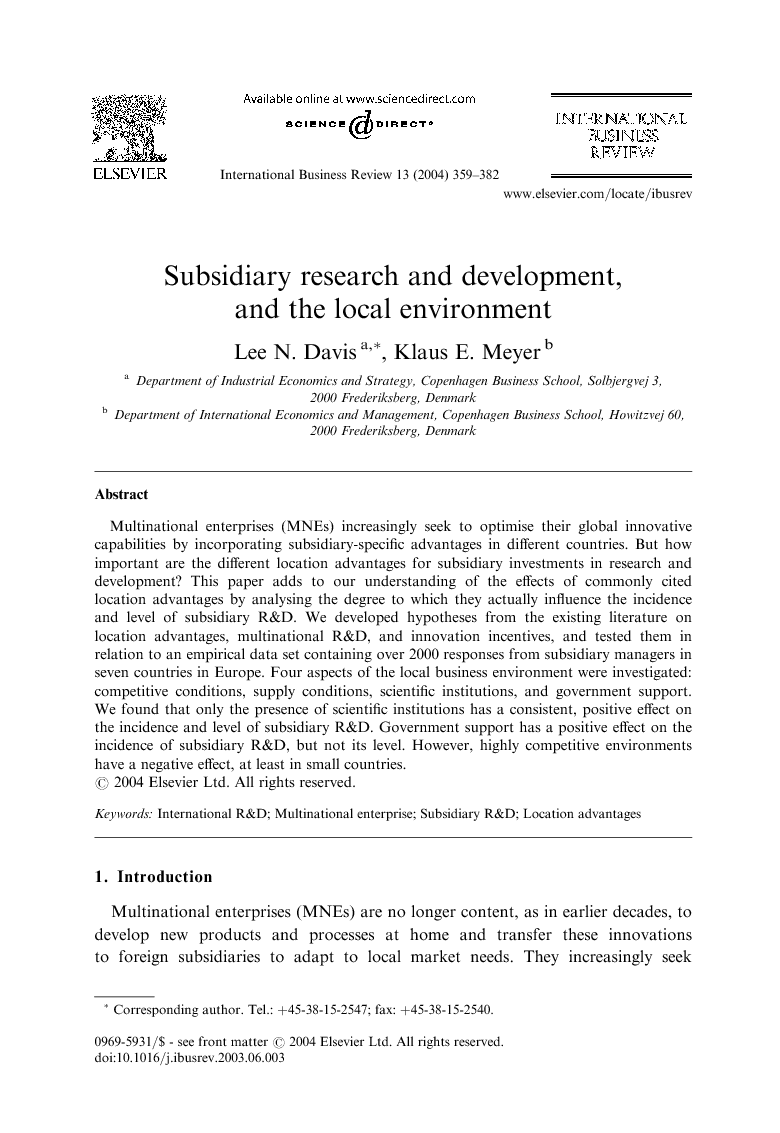 Multinational enterprises (MNEs) increasingly seek to optimise their global innovative capabilities by incorporating subsidiary-specific advantages in different countries. But how important are the different location advantages for subsidiary investments in research and development? This paper adds to our understanding of the effects of commonly cited location advantages by analysing the degree to which they actually influence the incidence and level of subsidiary R&D. We developed hypotheses from the existing literature on location advantages, multinational R&D, and innovation incentives, and tested them in relation to an empirical data set containing over 2000 responses from subsidiary managers in seven countries in Europe. Four aspects of the local business environment were investigated: competitive conditions, supply conditions, scientific institutions, and government support. We found that only the presence of scientific institutions has a consistent, positive effect on the incidence and level of subsidiary R&D. Government support has a positive effect on the incidence of subsidiary R&D, but not its level. However, highly competitive environments have a negative effect, at least in small countries.

Multinational enterprises (MNEs) are no longer content, as in earlier decades, to develop new products and processes at home and transfer these innovations to foreign subsidiaries to adapt to local market needs. They increasingly seek to optimise their global innovative capabilities by incorporating subsidiary-specific advantages in different countries, sometimes engaging in major research at the subsidiary level. The literature on multinational R&D discusses a range of putatively valuable location advantages (e.g. Boutellier, Gassmann and Von Zedtwitz, 1999, Conference Board Europe, 1995, Florida and Kenney, 1994, Frost, 2001, Håkanson, 1992, Kuemmerle, 1999, OECD, 1998, Patel and Vega, 1999, Pearce, 1997 and Von Zedwitz and Gassmann, 2002). But most of this work is based on either patent data or sources from MNE headquarters, not the responses of subsidiary managers. There is also an extensive general literature on the effects of different aspects of the local business environment on R&D (e.g. Porter, 1990 and Von Hippel, 1988)—but none, to our knowledge, analyse these effects from the perspective of the subsidiary manager. This paper adds to the literature on international R&D by analysing which of the commonly cited location advantages affect the incidence and level of subsidiary R&D, based on the questionnaire responses of subsidiary managers. To this end, we generated hypotheses from the literature on location advantages, multinational R&D, and innovation incentives, and tested them with subsidiary level data. The results have implications both for understanding multinational R&D, and the effects of industrial policy. In its reliance on subsidiary assessments, this paper contributes to the emerging literature that takes a “subsidiary view” of the MNE (e.g. Andersson, Forsgren and Pedersen, 2001, Birkinshaw, 2000 and Birkinshaw and Hood, 1998a). The study employs data of the “Centres of Excellence” database,1 which was constructed specifically to investigate the nature of the MNE as a “multi-centre” firm (e.g. Holm & Pedersen, 2000 and Moore, 2001). The survey on which this paper is based contains responses from subsidiary managers in seven European countries: the UK, Germany, Austria, Sweden, Norway, Finland, and Denmark. Our approach differs from parallel research with this database in its focus of analysis. While prior studies have sought to illuminate the affiliate’s relationship with the parent MNE and with its local and global business partners from the affiliate’s point of view, they paid little attention to the effects of the local environment. An important exception is the recent contribution by Frost, Birkinshaw, and Ensign (2002), who investigate the factors (including the local environment) governing the emergence of centers of excellence in MNEs in Canada. The paper explores two interrelated research questions. Which of four commonly cited location advantages—market competitiveness, supply conditions, scientific institutions, and government support—are inducing R&D by subsidiaries? Moreover, which of these factors have a significant impact on the scale of the R&D investment? Three interesting findings emerge from the empirical analysis. First, only the presence of scientific institutions has a consistent and positive effect on both the incidence and level of subsidiary R&D. Second, government support has in some cases a positive effect on the incidence of affiliate R&D—but not its scale. Third, highly competitive market environments have a negative effect on subsidiary R&D, at least in small countries. Taken together, these findings demonstrate that of greatest importance to stimulating subsidiary R&D are institutional conditions, especially proximity to top quality scientific institutions. Thus we suggest that more attention be paid to the assessments of subsidiary managers of the strengths of the local environment in planning R&D investment decisions and strategies at the subsidiary level. Understanding how activation of local-environment potentials can generate dispersed individualised capacities in MNE development is a central role in the value of R&D subsidiaries. The arguments in this paper are structured as follows. We start with a brief review of the relevant literature. The next section develops the hypotheses used to test the effects of different location advantages on subsidiary R&D. We then present the empirical data, and the design of the empirical study. The results of the empirical study are set forth, followed by a discussion of the impact of mode of subsidiary establishment and the size of the host country market on subsidiary R&D. In conclusion, we outline some of the implications of the analysis.