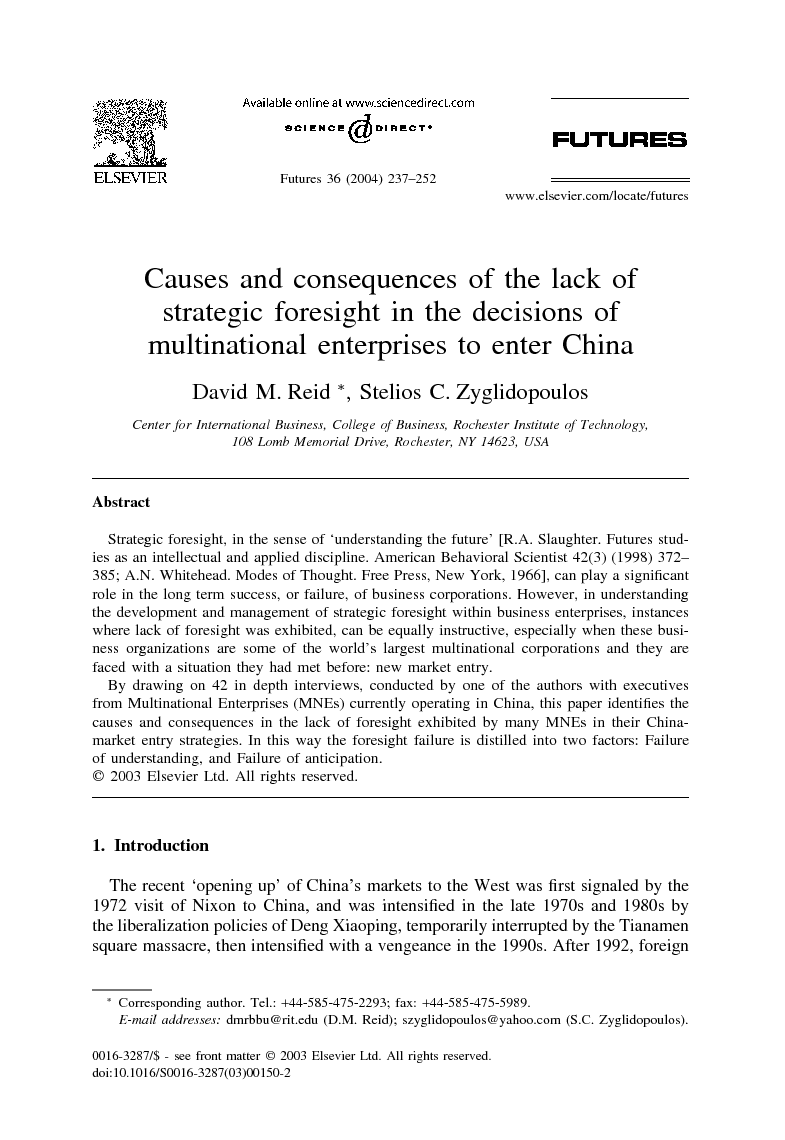 Strategic foresight, in the sense of ‘understanding the future’ [R.A. Slaughter. Futures studies as an intellectual and applied discipline. American Behavioral Scientist 42(3) (1998) 372–385; A.N. Whitehead. Modes of Thought. Free Press, New York, 1966], can play a significant role in the long term success, or failure, of business corporations. However, in understanding the development and management of strategic foresight within business enterprises, instances where lack of foresight was exhibited, can be equally instructive, especially when these business organizations are some of the world’s largest multinational corporations and they are faced with a situation they had met before: new market entry. By drawing on 42 in depth interviews, conducted by one of the authors with executives from Multinational Enterprises (MNEs) currently operating in China, this paper identifies the causes and consequences in the lack of foresight exhibited by many MNEs in their China-market entry strategies. In this way the foresight failure is distilled into two factors: Failure of understanding, and Failure of anticipation

The recent ‘opening up’ of China’s markets to the West was first signaled by the 1972 visit of Nixon to China, and was intensified in the late 1970s and 1980s by the liberalization policies of Deng Xiaoping, temporarily interrupted by the Tianamen square massacre, then intensified with a vengeance in the 1990s. After 1992, foreign direct investment (FDI) in China, led by overseas Chinese investors, Western and Japanese Multinational Enterprises (MNEs) grew at a geometric rate. However, the investments of many Western MNEs have failed, thus far, to generate the expected financial performance. In Studwell’s words, “China failed to make the kind of contribution to the bottom line that global corporations had predicted” [3: 18], and in many cases this failure was spectacular. Consider the following examples from our research. A western manufacturer of a chocolate beverage drink invested heavily in manufacturing facilities in China, with the rationale that “even if a very small percent of this huge population consumes our product, we should expect a very high return on our investment.” But, the Chinese do not like chocolate, and the capturing of this ‘small’ market share never happened. The result was that, currently, the manufacturer meets its annual sales quota with one month’s production. Another major western manufacturer of industrial products, after investing heavily in production facilities in China was caught in a destructive price competition with local, state-owned-enterprises (SOEs) that could provide similar products at below cost prices. The reason why these local manufacturers could consistently sell their products below cost was because they were constantly operating at a loss, financed by state owned banks, who would find it difficult to cut off this credit to SOEs. As a Chief Executive Officer (CEO) of a British consumer products company explained: “The local manufacturer, how do I put it nicely? They do not need to make a profit and they do not do it.” A major western manufacturing company entered China in a joint venture with a local manufacturer, only to experience the blocking of its expansion plans by its partner. The reason? The Chinese partner did not want to lose its share in the partnership and could not raise the funds required to maintain its share in an expanded venture. The foreign partner was thus unable to realize its China market aspirations. The following example from Studwell [3] is also instructive: A western cement company was forced to invest in the latest environmental standards before it was allowed to produce and sell cement in the Chinese market, only to determine afterwards that most SOEs refused to buy its products, but preferred to purchase low quality cement from other local state owned enterprises operating under little or no environmental obligations. Meanwhile the landscape of foreign investment in China fills with MNEs, which over-, under-, or plainly miscalculated all kind of salient structural, cultural, and competitive parameters. Of course, one might argue that when MNEs enter a new market they are bound to make mistakes and face unforeseen problems. But, it is the magnitude of these mistakes, which indicates a major lack of strategic foresight since the MNEs involved were highly experienced in entering new markets. Now, if a famous cardiologist fails to diagnose his/her own symptoms as a heart attack one might find this bizarre. But if fifty cardiologists fail to diagnose their own symptoms as heart attacks, then there must be some systemic reason explaining the improbability of such an event. Therefore, given the international experience and the number of MNEs that seriously miscalculated in entering the Chinese market, the matter indicates a systemic failure of strategic foresight. Drawing on the foresight literature and in-depth interviews conducted in China with top executives from foreign MNEs currently operating there, this paper develops a model explaining this systemic failure in the quality of strategic foresight exhibited by these China-market entrants. This model is of interest to two distinct streams of literature. First, with regard to the literature of strategic foresight, it can illuminate ‘why companies fail to exhibit strategic foresight.’ And, second, of interest to the international business literature is, ‘why in particular did MNEs that entered the Chinese market fail in their strategic foresight capability, given their familiarity with new market entry situations?’ In order to achieve the above, the remainder of this paper proceeds as follows. First, the concept of strategic foresight is presented and possible causes for strategic foresight failure are identified from the emerging literature. Second, the methodology used for this project is described. Third, a model explaining strategic foresight failure is presented, and subsequently the model’s two major parts—failure of understanding, and failure of anticipation—are discussed in more detail. The paper concludes with a discussion of the model developed here and its implications for the fields of strategic foresight and international business.

We have examined the nature of foresight as it applies to the China market-entry experiences of MNEs. In doing so we have developed a conceptual model that demonstrates how some of the key phenomena are linked. Two aspects of foresight failure are highlighted: failure of understanding and failure of anticipation. These have been explained in some detail. The former was explained in terms of competitive isomorphism, the tendency of management to follow lemming-like competitors they rate. The size of the China market acted like an attractor to the lightening of optimism, which encouraged a lack of diligence in conducting prior marketing research. The urgency with which it was gauged necessary to pursue the opportunity exacerbated the issue. The failure of anticipation resulted in badly judged investments that contributed to oversupply issues, rushed partnership decisions, which in turn were followed by JV problems. Inappropriate, in some cases, marketing decisions muddied the competitive terrain. Some MNEs stumbled when they encountered social networking issues, known in China as guanxi. This guanxi phenomenon makes a major contribution to the slow rate of progress and the higher than expected costs of developing business positions in China. Though it is true that history is not necessarily a guide to the future, it is apparent here that many companies would have benefited from the basic formula of examining the historical experience of others. This would have revealed an error pattern on behalf of the earlier MNE equivalents. And many of the examples that we came across were simply repeats of the China delusion that has haunted would-be China entrants for centuries. Though the China market is potentially huge that does not necessarily mean that it presents the ingredients of an opportunity to suit every western MNE. Some companies may have been influenced by short-term effects. The market had been closed to foreign goods and there was a pent-up appetite to sample that which had been forbidden. That was a short-term effect and consumers quickly established that many price premiums for foreign products were not worth paying. For example, consumers were prepared to pay premiums for foreign soft drinks but not for beers, in the belief that certain specific local products are superior to the imported version. What this paper demonstrates above all is that no matter how sophisticated the corporate entity, they can be lured by peer example and the belief the opportunities they see through their strategic windows are singular one-time golden moments. Foresight can not be assumed and where it exists it can be severely limited.