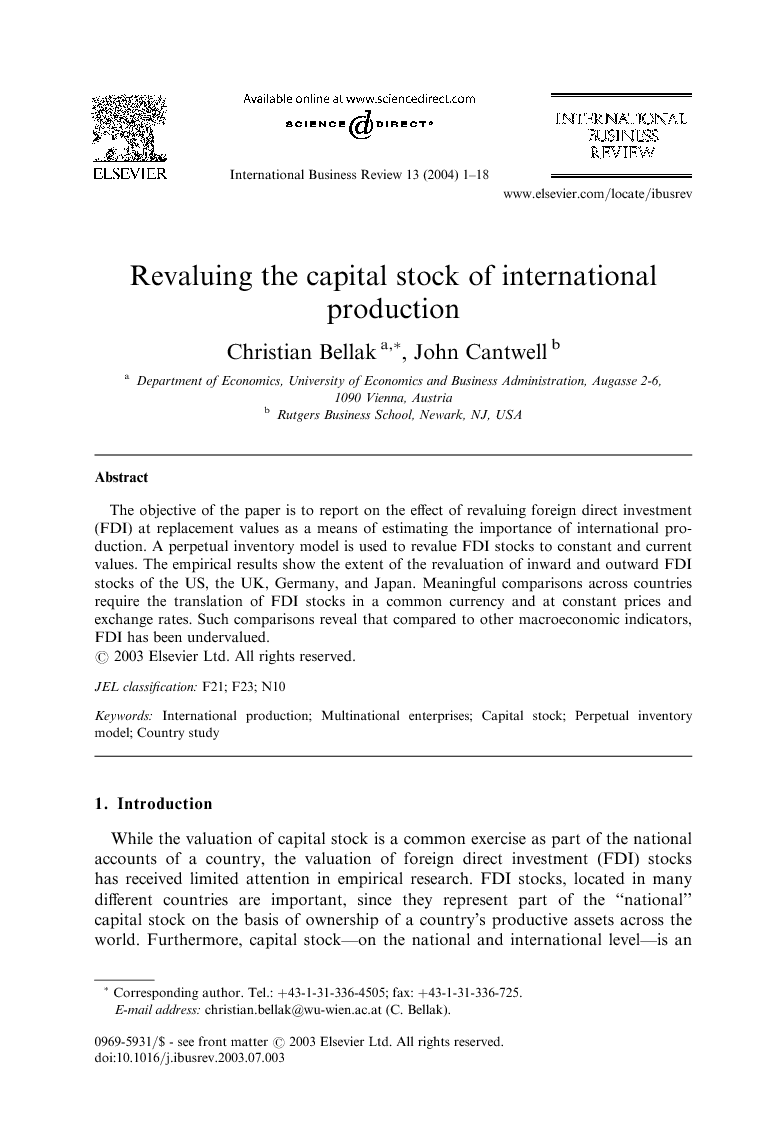 The objective of the paper is to report on the effect of revaluing foreign direct investment (FDI) at replacement values as a means of estimating the importance of international production. A perpetual inventory model is used to revalue FDI stocks to constant and current values. The empirical results show the extent of the revaluation of inward and outward FDI stocks of the US, the UK, Germany, and Japan. Meaningful comparisons across countries require the translation of FDI stocks in a common currency and at constant prices and exchange rates. Such comparisons reveal that compared to other macroeconomic indicators, FDI has been undervalued.

While the valuation of capital stock is a common exercise as part of the national accounts of a country, the valuation of foreign direct investment (FDI) stocks has received limited attention in empirical research. FDI stocks, located in many different countries are important, since they represent part of the “national” capital stock on the basis of ownership of a country’s productive assets across the world. Furthermore, capital stock—on the national and international level—is an important measure of (i) potential output, (ii) for estimations of future income under the assumption of constant capital coefficients, and (iii) factor substitution and productivity in investment and production functions. There is now considerable interest in productivity comparisons between foreign-owned and domestically owned firms (see e.g. Baldwin, Lipsey, & Richardson, 1998). The degree of multinationality of a country’s production is determined by the extent of outward international production by domestically owned firms, and inward international production located in the country in question by foreign-owned firms. In the absence of direct measures, international production is normally measured at a national level by outward and inward FDI stocks. For a number of reasons, published series of inward and outward FDI stock data are a very imperfect measure of international production, inter alia the publication of FDI data at historical values, the lack of important information on FDI stocks such as the absence of a distinction of structures and machinery, about divestments and survival rates as well as problems related to the international nature of FDI stocks (exchange-rate movements, etc.). In particular, these problems prevent meaningful comparisons of FDI stocks either between different countries or in relation to domestic capital stocks or other indicators of the national accounts. Unfortunately, the existing practice of reporting FDI stocks on a historical cost basis (i.e. book values) is unsatisfactory, because it leads to an underestimation and does not take into account the age distribution of stocks, thus making accurate international comparisons of FDI stocks almost impossible (see e.g. Bellak, 1998, Bellak, 1999, Cantwell, 1984, Cantwell, 1992 and Cantwell and Bellak, 1998). This paper introduces a method for the revaluation of FDI stocks. Net outward and inward FDI stock may be valued at historic cost (i.e. book values), or at replacement (or market) cost at constant or current prices in common or local currency. Since the expression “market-cost” is also used when FDI is revalued by stock-market prices, we prefer the term, current cost. Book values reflect the firm’s tangible assets at historical values as reported in the balance sheet. The main difficulty in the revaluation of FDI stocks arises from the fact that price-changes (stemming from changes of asset-prices as well as exchange rates) affect the value of investment flows, which in turn alters the stocks. Earlier approaches to international comparisons of FDI stocks ignored price movements and revalued historical values at current exchange rates, regardless of the age structure of the original investments. In contrast, we take into account price movements and by the same procedure adjust year by year backwards through time for exchange-rate changes, thus making more meaningful international comparisons of historically accumulated stocks. We examine the empirical significance of these effects. Based on our earlier work, we present some new results on constant and current (replacement) values of the inward and outward FDI stocks of Japan, Germany, the US and the UK. The objective of the paper is to improve upon existing methodology in order to shed new light on the significance of production organized by multinational enterprises (MNEs) and to provide new insights into the extent of globalization. Given the significance of contemporary debates over globalization and the conflicting views that have been expressed, empirical evidence on the (changing) role of multinational enterprises should be provided in the best possible state. Although owing to their widespread availability, FDI data are the only reasonable proxy for the scale and composition of the activities of MNEs, in particular, on a longitudinal and cross-country perspective they are a flawed measure, if left in their raw form. Thus, using transformed data, as proposed in this paper, is an important step to avoid drawing misleading conclusions on the activities of MNEs as is too often found in empirical research. The contribution of this paper therefore is to improve the usefulness of FDI data which are provided by various authorities. The remainder of this paper consists of five sections: Section 2 contains a short literature review and Section 3 presents the model used. The data are presented in Section 4 and the estimation and results are presented in Section 5. There is a short concluding Section 6.

The purpose of this paper was to report on the effect of revaluing FDI at replacement values as a means of estimating more accurately the importance of international production. The extent of the adjustment is not only substantial, but also the study shows that the imbalance between mature (the US, the UK) and new (Japan, Germany) investor countries increases substantially after revaluation. In other words, the data published on a historical-cost basis largely underestimate real developments. Apart from such quantitative aspects of the revaluation procedure, the adjustment and the real values of FDI stocks in international terms and in relation to other macroeconomic indicators, the analysis bears several other implications. Related to the role of multinational enterprises in country development and growth, their often asserted importance relative to domestic firms can be better reconciled with the transformed data. Further, policies justified or initiated by a perceived over- or underperformance of countries in terms of their inward and outward FDI might be shown ex post as having been misconceptualized on the basis of the raw data. The present paper also provides the methodological basis for the valuations recommended by international bodies such as the OECD (1992) and the IMF (1993). The advantages of the method applied refer not only to the simplicity of our approach (given the lack of important information on FDI stocks mentioned above) but also to the possibility of quoting different national FDI stocks in a common currency. Thus, we solve the problems of meaningful aggregation and international comparison of national FDI stocks of different vintage even at times of substantial exchange-rate movements and changes in national price-levels. As more and more data on FDI stocks are becoming available, this type of revaluation exercise can be extended and applied to other countries as well.