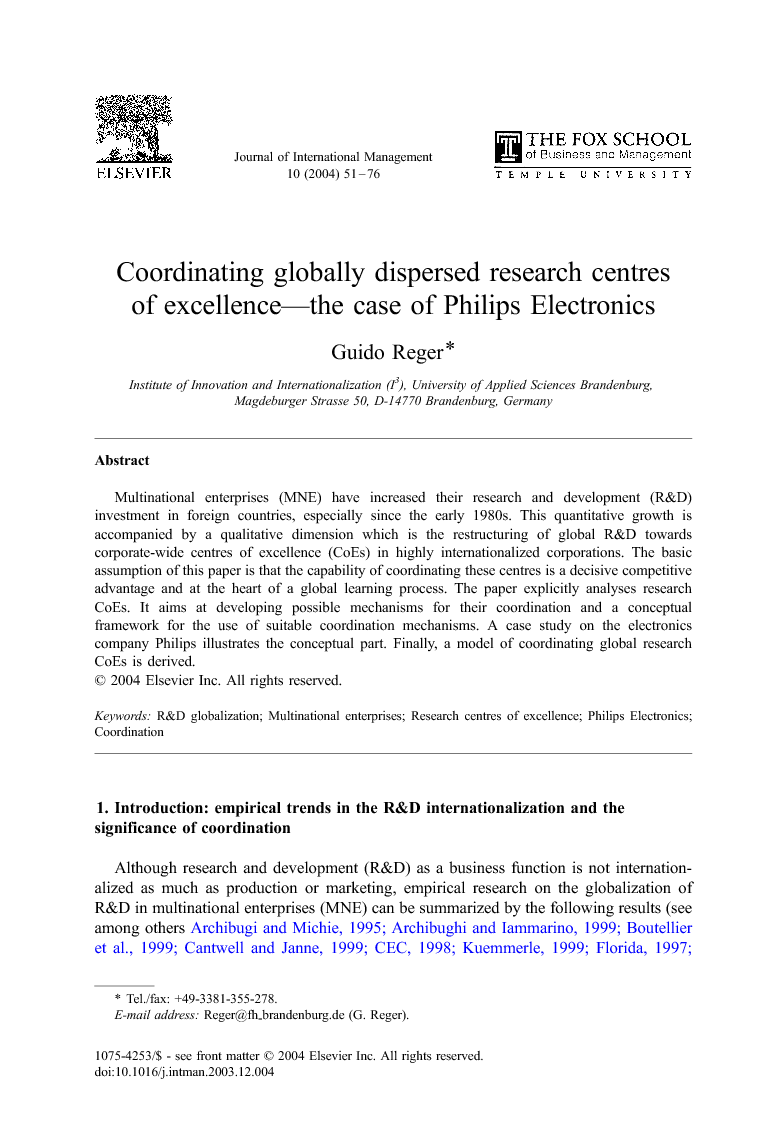 Multinational enterprises (MNE) have increased their research and development (R&D) investment in foreign countries, especially since the early 1980s. This quantitative growth is accompanied by a qualitative dimension which is the restructuring of global R&D towards corporate-wide centres of excellence (CoEs) in highly internationalized corporations. The basic assumption of this paper is that the capability of coordinating these centres is a decisive competitive advantage and at the heart of a global learning process. The paper explicitly analyses research CoEs. It aims at developing possible mechanisms for their coordination and a conceptual framework for the use of suitable coordination mechanisms. A case study on the electronics company Philips illustrates the conceptual part. Finally, a model of coordinating global research CoEs is derived.

Although research and development (R&D) as a business function is not internationalized as much as production or marketing, empirical research on the globalization of R&D in multinational enterprises (MNE) can be summarized by the following results (see among others Archibugi and Michie, 1995, Archibughi and Iammarino, 1999, Boutellier et al., 1999, Cantwell and Janne, 1999, CEC, 1998, Kuemmerle, 1999, Florida, 1997, Meyer-Krahmer and Reger, 1999, OECD, 1998, Pearce, 1999 and Serapio and Dalton, 1999): 1. R&D investment abroad has increased since the early 1980s; 2. the globalization of R&D is yet better described by ‘triadization’ because R&D target regions/countries are mainly North America, Japan, and western Europe; 3. R&D units in foreign countries have gained more responsibilities and competencies besides the still-existing traditional mode of adapting products developed in the home country and technical support for production abroad; and 4. the quantity (measured by R&D budget spent abroad to total R&D budget) and quality (function, organization, and responsibility) of R&D activities abroad differs very much between countries of origin, sectors, technology fields, and even companies. An own survey among 209 of the world's most technology-intensive corporations in North America, Japan, and western Europe, with R&D expenditures of US$100 million or more, confirm the abovementioned results (see Edler et al., 2002). The degree of R&D internationalization in quantitative terms, defined as the share of the overall R&D budget spent for R&D beyond the borders of a company's home country, increased in the sample companies (see Table 1). A striking imbalance comes to the fore if one looks at the geographic origin of the companies. Japanese companies are much less inclined to generate technological knowledge abroad and to engage in international R&D activities than North American or western European ones. The forward projection for the year 2001 from the point of view of the companies investigated indicates that the internationalization of R&D proceeds. Using the regression method, a still-growing trend towards internationalization of R&D for the year 2004 can be extrapolated.

Until the end of the 1980s, Philips' R&D management can be described as very informal. With the change from a multinational towards a transnational strategy (in the understanding of Bartlett and Ghoshal, 1989), R&D management also changed dramatically. The main starting points for this change were a stronger division of labor between the research labs, the establishment of CoEs, the installing of formal decision-making processes, customer orientation in research, steering a substantial proportion of research by internal markets, and the integration of the globally dispersed central laboratories. These changes were also visible in the use of a greater number and a broader set of mechanisms to fulfil different coordination tasks. Obviously, different types of coordination mechanisms have to be applied to coordinate the research CoEs in seven regions/countries among each other and linking them with the needs of the divisions and BG—both at various locations (see Table 5). The predominating informal mechanisms were, and still are, personal contacts and informal communication. To the well-developed informal coordination mechanisms of personal contacts and informal communication, the R&D management of the 1990s added structural and formal mechanisms. With regard to planning, these include the sophisticated instrument of capability management and the structural coordination organs comprising the various committees, integrating persons (CTO, PD/BG coordinators) and the Corporate Research Bureau. The latter plays an important role in coordinating central research with the divisions and groups, and in coordinating the central labs among each other.