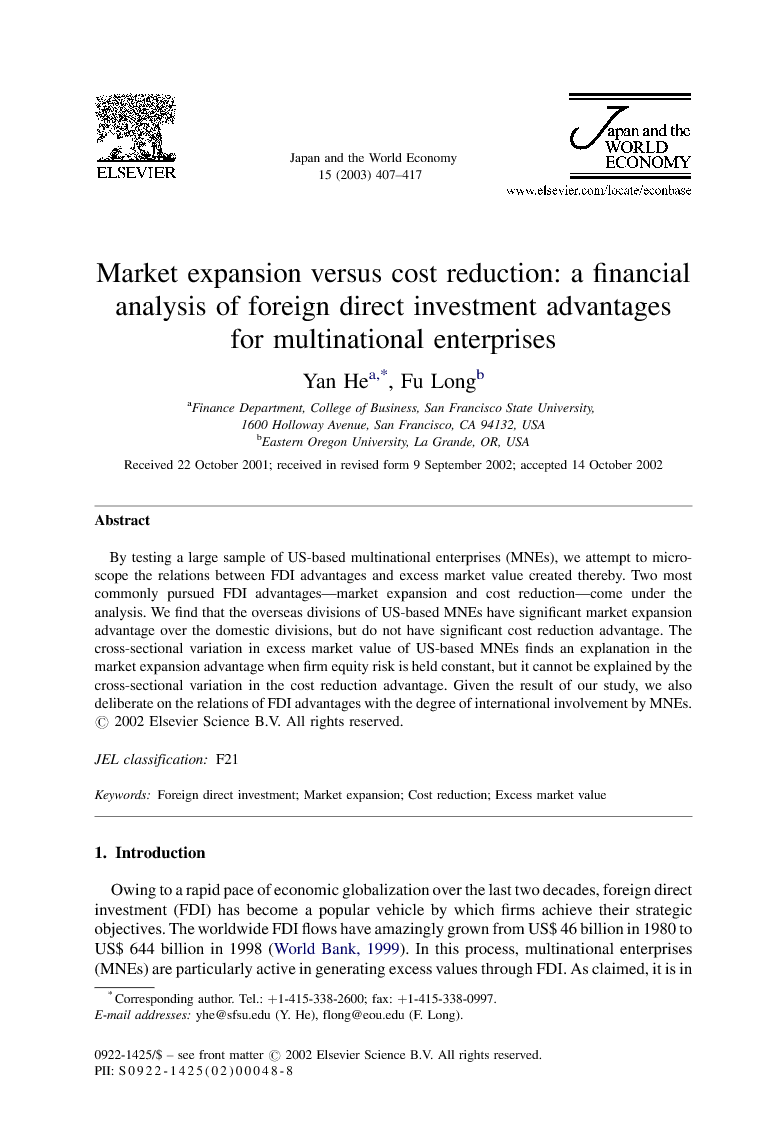 Owing to a rapid pace of economic globalization over the last two decades, foreign direct investment (FDI) has become a popular vehicle by which firms achieve their strategic objectives. The worldwide FDI flows have amazingly grown from US$ 46 billion in 1980 to US$ 644 billion in 1998 (World Bank, 1999). In this process, multinational enterprises (MNEs) are particularly active in generating excess values through FDI. As claimed, it is in the interest of MNEs to locate production or market activities abroad where they can benefit from market power expansion as well as location-specific advantages.1 Among a variety of strategic advantages that MNEs pursue through FDI, two stand out conspicuously, i.e. market expansion and cost reduction. While market-expansionary FDI seeks to enlarge market power through direct sales and other related activities, cost reduction minded FDI goes after cheap labor, raw materials, or other advantages in the host country. Theoretically, both types of FDI contribute to the viability of investing firms. But are they reliable as claimed and strategically worthwhile compared to MNEs’ domestic operations? Are they both equally effective in creating excess values for MNEs? How are they related to the degree of MNE’s international involvement as enticement? Our study intends to answer these questions through an analysis of these two major FDI advantages. It examines the relationship of these strategic advantages with excess values generated thereby. With an empirical test on the performance of 157 US-based MNEs in recent years, we in particular distinguish the market-expansionary FDI and the cost-reducing FDI, and investigate their respective effect on the excess value generation. First, our findings show that overseas divisions of US-based MNEs does have significant market expansion advantage over domestic divisions. Second, the cross-sectional variation in excess market value of US-based MNEs is mainly related to the market expansion advantage. Third, the FDI of US-based MNEs does not have significant cost reduction advantage over domestic divisions, and the excess market value of US-based MNEs cannot be attributed to the cost reduction advantage of FDI inclusively. The organization of this paper is as follows. Section 2 conducts a literature review in the field of FDI studies. Section 3 lays out an empirical model of excess market value in relation to FDI advantages. Section 4 discusses data sample. Section 5 analyzes test results. Section 6 summarizes the findings of this paper.

By testing a large sample of US-based MNEs, we attempt to microscope the relations between FDI advantages and excess market value created thereby. For the measurement, two most commonly pursued FDI advantages—market expansion and cost reduction—come under the examination. We want to find out whether they truly generate excess value for MNEs or merely bear their face value in international operations. First, the result shows that the overseas divisions of US-based MNEs have significant market expansion advantage over the domestic divisions. It unmistakably offers a positive note for the market-expansionary FDI in terms of its merit in generating excess values. However, the FDI of US-based MNEs does not have significant cost reduction advantage over the domestic divisions, and therefore their excess market value cannot be attributed to the cost reduction advantage of FDI. Second, the magnitude of an MNE’s foreign involvement is positively related to the advantage embedded in market-expansionary FDI when firm size is held constant. Market-expansionary FDI tends to result in a high level of foreign involvement, given that this advantage is attainable and can be realized. In contrast, the cost reduction advantage is less likely to have a direct impact on the level of MNE’s foreign involvement, given its unattainability. Third, the cross-sectional variation in excess market value of US-based MNEs finds an explanation in the market expansion advantage when firm equity risk is held constant. Again, it cannot be explained by the cross-sectional variation in the cost reduction advantage. As elaborated above, we have examined the issue from two different angles: market expansion versus cost reduction in terms of their impact on the magnitude of foreign involvement with firm size held equal, and their effect on the cross-sectional variation in excess values at the same level of risk. These two angles are interrelated, and they reinforce each other to distinguish two FDI advantages and pinpoint their respective effects on excess value generation. This helps clarify the inside corporate strategy of MNEs, reveal their strategic intention in the FDI undertaking, and explain the variation in effectiveness of FDI ventured by MNEs. Theoretically, we are not challenging the validity of cost reduction advantage of FDI. Rather our study focuses on the differentiation in attainability and reliability of FDI advantages. We may just feel safe to say that, at this stage, if the cost-reducing FDI does not contribute to the excess value and the claimed advantage cannot be realized, there will be little motivation for MNEs to pursue it. As for the advantage of cost reduction that FDI claims theoretically, it is barely as attainable as expected. This is because cheap labor in the host countries does not necessarily realize cost reduction advantage and bring about excess values as the result. There are other factors in the equation in which cheap labor or inexpensive materials alone is not enough to explain the issue of cost efficiency. For example, in many host countries, the advantage of cheap labor is very likely offset by the lack of sufficient economic infrastructure, efficient market system, consistent policies, or a stable environment in general. The other side of the coin further proves our speculation: the high labor cost and other production related costs in the US do not place domestic divisions or firms at disadvantage in terms of operating efficiency. Of course, in a foreign market with an equally efficient production system, the FDI cost reduction advantage would be more likely realized if the labor cost is lower in that foreign market than in the US This still awaits further studies.