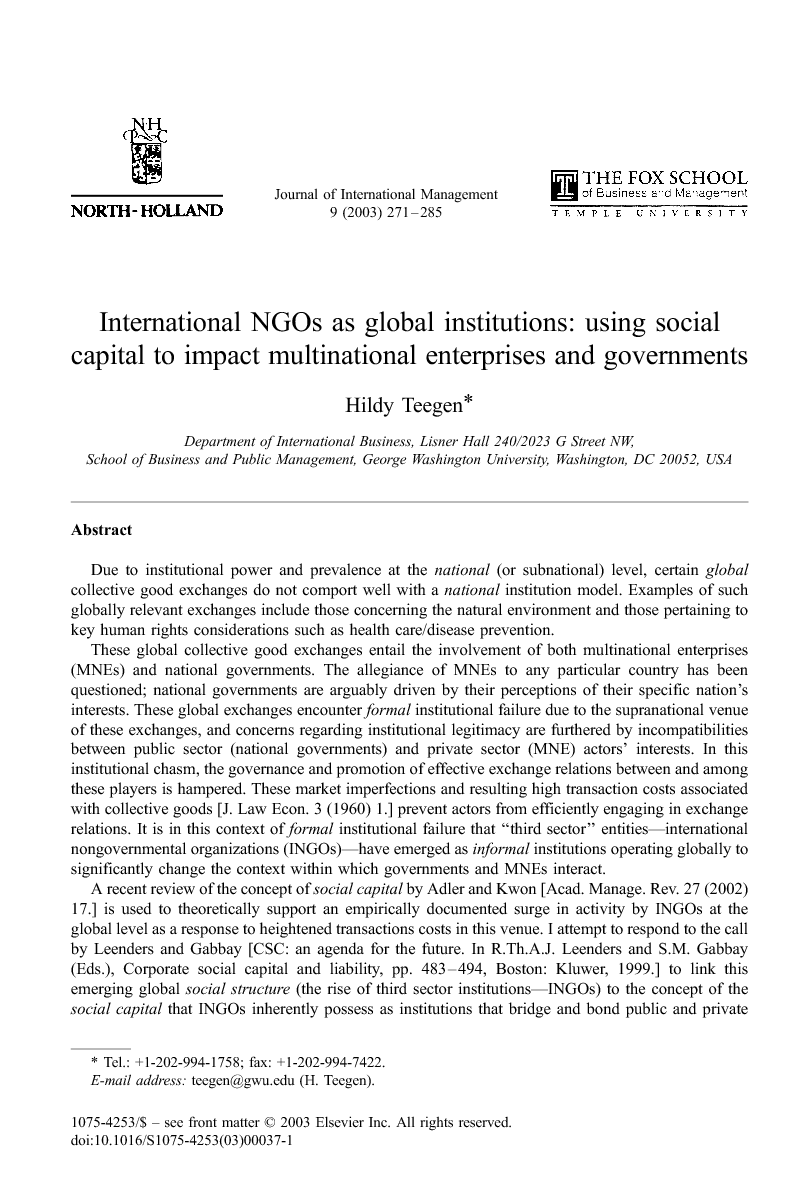 Due to institutional power and prevalence at the national (or subnational) level, certain global collective good exchanges do not comport well with a national institution model. Examples of such globally relevant exchanges include those concerning the natural environment and those pertaining to key human rights considerations such as health care/disease prevention. These global collective good exchanges entail the involvement of both multinational enterprises (MNEs) and national governments. The allegiance of MNEs to any particular country has been questioned; national governments are arguably driven by their perceptions of their specific nation's interests. These global exchanges encounter formal institutional failure due to the supranational venue of these exchanges, and concerns regarding institutional legitimacy are furthered by incompatibilities between public sector (national governments) and private sector (MNE) actors' interests. In this institutional chasm, the governance and promotion of effective exchange relations between and among these players is hampered. These market imperfections and resulting high transaction costs associated with collective goods [J. Law Econ. 3 (1960) 1.] prevent actors from efficiently engaging in exchange relations. It is in this context of formal institutional failure that “third sector” entities—international nongovernmental organizations (INGOs)—have emerged as informal institutions operating globally to significantly change the context within which governments and MNEs interact. A recent review of the concept of social capital by Adler and Kwon [Acad. Manage. Rev. 27 (2002) 17.] is used to theoretically support an empirically documented surge in activity by INGOs at the global level as a response to heightened transactions costs in this venue. I attempt to respond to the call by Leenders and Gabbay [CSC: an agenda for the future. In R.Th.A.J. Leenders and S.M. Gabbay (Eds.), Corporate social capital and liability, pp. 483–494, Boston: Kluwer, 1999.] to link this emerging global social structure (the rise of third sector institutions—INGOs) to the concept of the social capital that INGOs inherently possess as institutions that bridge and bond public and private sector actors. I provide an illustrative example of an INGO that utilizes social capital in filling an informal institutional role for global goods/services transactions: the Nature Conservancy and its work in a prototype Joint Implementation (JI)/Clean Development Mechanism project in Belize as called for under the Kyoto Protocol.

Institutions provide contexts for firms and governments to interact in providing goods and services to the public. Most institutions are national in character—a country's laws, political system and administrative bodies are generally seen by firms as key environmental factors constraining or incentivizing the firm's activities in a given venue (Kostova, 1999). Governments, through national institutions, work to protect public welfare interests. In exchange for the provision of security, economic promotion and other public goods, citizens transfer their power to the national government. A government, therefore, is accountable to its nation's citizens, who judge it according to its effectiveness in providing for social and economic welfare. Firms engage with the public via market mechanisms, trading goods and services produced for valuable monetary and nonmonetary compensation. Multinational enterprises (MNEs) are firms active across nation-state boundaries and thus may trade benefits for one nation-state's citizens against benefits for another nation-state's citizens. The largely hierarchical model of national government interaction with its national public and the largely market-based model of multinational firms' interaction with a variety of national publics do not comport well with a significant class of exchanges between and among individuals, governments and firms. This class of exchange concerns goods that are defined as collective goods (Olson, 1965). These goods—as rivalrous and exclusive—can belie the ability of national institutions and/or MNEs to engage in efficient exchange as neither private firms nor public institutions have the requisite information, expertise, influence or collaborative abilities to create value by simultaneously fostering public and private parties' welfare. The failure of public institutions and private firms to create value in global collective goods exchanges stems from two basic limitations. The first of these limitations is the lack of an effective supranational institution to govern or regulate the good in question. This problem results from the inherently global nature of these exchanges—as exemplified by the cases of the natural environment and of human rights protection via basic health care—coupled with the inherently state-centric nature of most institutions. The second of these limitations concerns the legitimacy proffered for public and private sector institutions. Private firms are commonly held to pursue profit maximization for the exclusive benefit of their shareholders that may run counter to the general public welfare goals of a nation-state's citizenry. The interests of private and public sector actors are often perceived to be incompatible; thus, cooperation in which mutually beneficial opportunities may be created is often overlooked. What is needed, then, is an institution that can overcome these two basic limitations, which retard the efforts of public and private sector actors in creating value for their respective constituencies: a state's citizens and a multinational's shareholders, thereby overcoming the transaction costs that would otherwise prevent efficient exchange. International nongovernmental organizations (INGOs) are informal institutions that are uniquely suited to this task. Because they are not motivated by shareholder profit and provide services and/or support missions that serve public interests across borders, the legitimacy of their actions may be above the reproach directed at firms and at individual national governments. Moreover, the transactions costs associated with collective goods result in exchanges that create negative externalities and reduce social welfare (Coase, 1960). In these instances, certain intermediaries might be effectively employed to reduce transaction costs and improve social welfare and exchange efficiency (Casson, 1991, p. 148). INGOs are successfully entering the global stage as such intermediaries. They serve as bridgers and bonders of otherwise disparate entities drawn from both private and public sectors. They are characterized as organizations based largely on social relations around a well-defined cause (e.g., biological diversity and disease prevention) (Sen, 1999) and use the tools of information, influence and solidarity (Adler and Kwon, 2002) to create social capital that provides exchange benefits to them as key institutional actors. Benefits can also be shown to extend to the other public and private sector actors who share the INGOs' operating environments. In this article, I will rely on Adler and Kwon's (2000) model of social capital to demonstrate how INGOs have gained important roles in the global economy as informal institutions that complement, and often supplant, formal institutions in creating more effective environments for private and public sector actors to interact. In so doing, INGOs will be shown to create value for themselves, for other actors and for the public at large, further legitimizing their importance in the global arena. The manuscript is organized as follows. Institutions will be defined and their role in the governance of global transactions will be addressed. A discussion of public sector/national government actors and of private sector/MNE actors and their respective interests will follow. In this section, a key distinction between hierarchical exchanges and market-based exchanges between these sectors and the public will be made. This distinction is useful for understanding the nature of collective goods, which will be defined next. This background on institutions, private versus public sector actors, the nature of collective goods and exchange situations with high transaction costs will provide the basis for a claim of international institutional failure for the provision of global collective goods. The Adler and Kwon (2002) model of social capital will be applied to INGOs. INGOs will be shown as organizations particularly adept at developing and leveraging social capital to create value for all parties concerned. Examples of INGO development and utilization of social capital will be provided to bolster these arguments. Tentative conclusions concerning these third sector institutions will be drawn and areas for future work will be identified in the final section.

4. Conclusions and future directions It has been argued here that an important set of exchanges in the global economy is not well accounted for by market or hierarchical exchange relations paradigms—those global collective good situations where benefits are nonexcludable within as well as across national lines. In these situations, neither private sector players nor national institutions have the proper incentives to engage in the exchanges alone, owing to the high associated transaction costs. However, INGOs have emerged to fill in as informal institutions that leverage social capital in spanning national boundaries. Owing to their unique mission as third sector actors, they have sufficient incentive to facilitate these collective good exchanges. Economic liberalization across the globe has given primacy to market incentives for firms. The recent World Economic Forum highlighted the growing importance of global social concerns that transcend national borders and defy profit maximization criteria due to their collective good nature. In this setting, then, one should reasonably expect that INGOs will perform a valuable function in promoting socially beneficial exchanges that have global impact. Adler and Kwon's (2002) model of social capital comports well with the emergence of INGOs as informal institutions dealing with collective good exchanges. The Nature Conservancy, a large and well-established INGO, is demonstrated to develop social capital from its varied social relations—social capital that it then uses to provide benefits to itself and the others it interacts with. Most notably, global public welfare can benefit from the INGO's participation. To move this application of social capital to INGOs beyond a single case, work in the future might address two important gaps in our understanding. The first of these gaps concerns the decision-making of INGOs in terms of social capital budgeting. Assessing the longitudinal impact of investments (monetary and otherwise) made in social relations with a wide array of actors for the INGO itself as well as for (global) public welfare is critical. Such measurements will be thorny at best; however, useful proxies might be gleaned by existing reputational indices for firms and INGOs, institutional stability indicators and (social issues) consumer profiles and demographics that map consumer values to different issues. Emerging work on socially anchored competencies of firms (O'Brien, 2001) might also provide promise in terms of assessing the fit between an INGO and a private sector counterpart. A related question concerns potential tension between an INGO's immediate operational goals, its broader mission and global public welfare. First and foremost, INGOs must be organized and administered in a way that ensures their survival. This survival depends on their ability to gain and retain legitimacy with (and potentially funding from) a wide range of actors—the public at large, foundations, multilateral organizations, governments and private firms. By aligning with one or another of these actors too closely, legitimacy concerns may be raised, impairing the INGOs' ability to develop and maintain social capital from other social relations. INGOs may further risk legitimacy when their organizational interests are viewed as taking precedence over those of other parties—particularly the interests of the public at large. Refining assessments of INGO legitimacy is then another important direction for gauging their role in the global economy and their ability to develop and utilize social capital. As Adler and Kwon (2002) note, social capital is a concept that many disciplines have found to explain success for actors that possess it or engage with others that do. As was presented here, INGOs involved in exchanges relating to global collective goods are ones particularly relevant to the examination of social capital and the benefits it can provide.