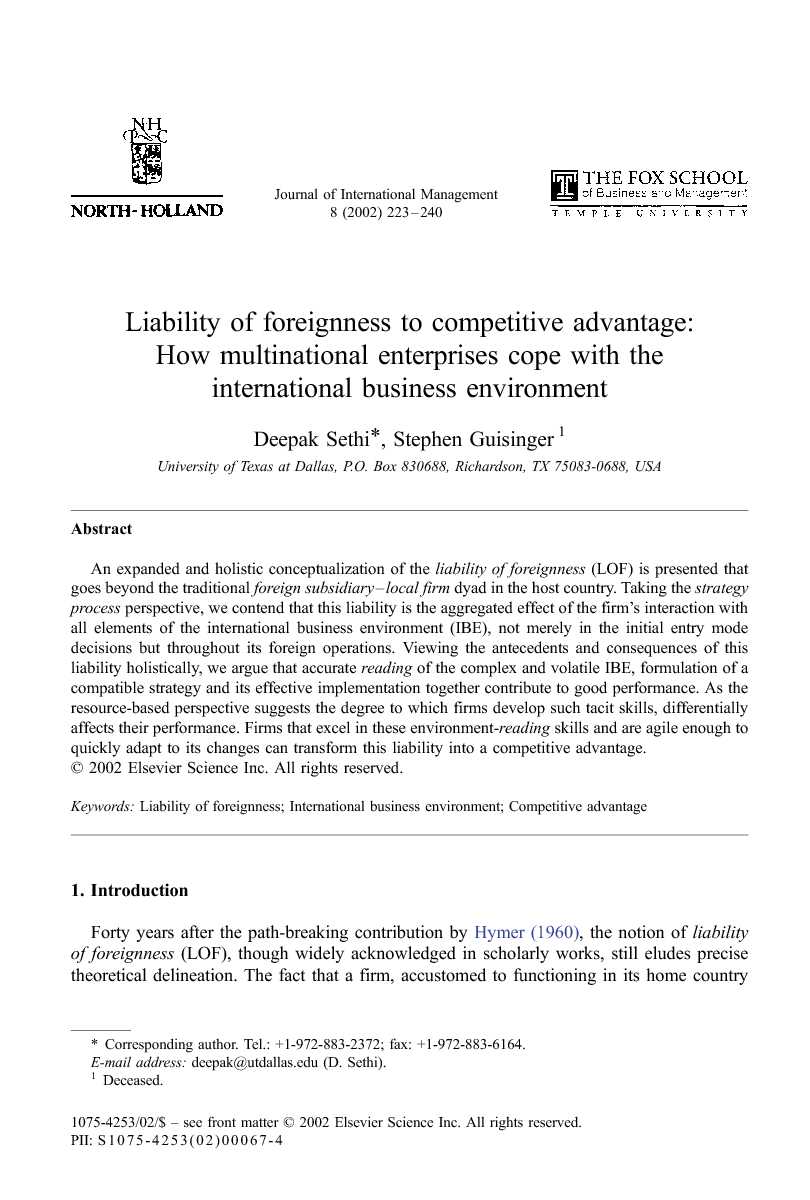 An expanded and holistic conceptualization of the liability of foreignness (LOF) is presented that goes beyond the traditional foreign subsidiary–local firm dyad in the host country. Taking the strategy process perspective, we contend that this liability is the aggregated effect of the firm's interaction with all elements of the international business environment (IBE), not merely in the initial entry mode decisions but throughout its foreign operations. Viewing the antecedents and consequences of this liability holistically, we argue that accurate reading of the complex and volatile IBE, formulation of a compatible strategy and its effective implementation together contribute to good performance. As the resource-based perspective suggests the degree to which firms develop such tacit skills, differentially affects their performance. Firms that excel in these environment-reading skills and are agile enough to quickly adapt to its changes can transform this liability into a competitive advantage.

The LOF arises primarily due to the MNE's interaction with the IBE, something that domestic firms are not confronted with. Scholars, presumably, had not previously attempted a holistic model of that interaction because individual components of the IBE itself had not been identified comprehensively. This paper has presented an integrated model of the entire MNE–IBE interaction process, which includes strategy formulation and its implementation as well, though the latter two aspects also apply to domestic firms. However, as we have argued, the complexity, volatility and interdependence of various elements of the IBE is far greater in magnitude than anything that even the largest domestic firm would ever have to encounter. This makes it imperative that environment reading, strategy formulation and implementation processes be viewed as an integrated whole in the context of MNEs. The model envisions all informational inputs from the IBE being systematically and comprehensively screened through any environment-analyzing analytical tool, such as the geovalent filter and then collated, interpreted, synthesized with all other information and analyzed. Such environmentally sensitized information would enable formulation of a strategy that is better compatible with the IBE. More importantly, the dynamic monitoring of the IBE enables reappraisal of MNE strategy, on an ongoing basis, in tandem with environmental changes. The alacrity of the firm in detecting those changes and its agility in adapting its internal procedures to quickly modify its strategy ensure that it is rarely out of sync with the environment. MNEs that consistently excel in these tacit skills embedded in their personnel and internal routines would enjoy a competitive advantage over their rivals. This integrated model should open up promising areas for further research in terms of operationalization and measurement of various elements of the LOF construct and assessing their impact on MNE performance. It would also be very useful for practice, as it enables MNE managers to better understand the intricacies of the IBE in order to devise appropriate intrafirm skills to deal with it.