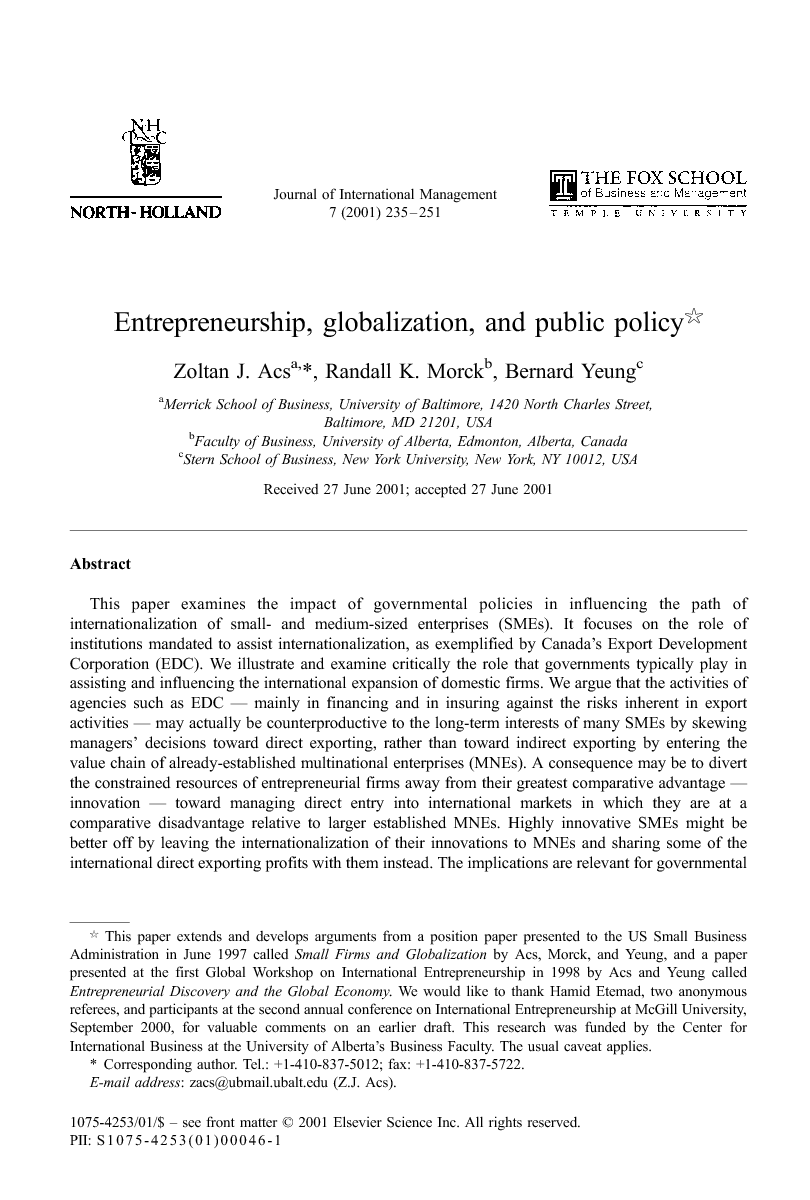 This paper examines the impact of governmental policies in influencing the path of internationalization of small- and medium-sized enterprises (SMEs). It focuses on the role of institutions mandated to assist internationalization, as exemplified by Canada's Export Development Corporation (EDC). We illustrate and examine critically the role that governments typically play in assisting and influencing the international expansion of domestic firms. We argue that the activities of agencies such as EDC — mainly in financing and in insuring against the risks inherent in export activities — may actually be counterproductive to the long-term interests of many SMEs by skewing managers' decisions toward direct exporting, rather than toward indirect exporting by entering the value chain of already-established multinational enterprises (MNEs). A consequence may be to divert the constrained resources of entrepreneurial firms away from their greatest comparative advantage — innovation — toward managing direct entry into international markets in which they are at a comparative disadvantage relative to larger established MNEs. Highly innovative SMEs might be better off by leaving the internationalization of their innovations to MNEs and sharing some of the international direct exporting profits with them instead. The implications are relevant for governmental policies toward internationalizing SMEs not just in Canada but in open, market-oriented economies everywhere.

This paper is about the importance of small entrepreneurial firms in the global economy and about whether current government policies towards assisting exports by small firms are appropriate.1 Much confusion exists about the proper definition of entrepreneurship. Some observers use the term to refer to all small businesses; others, to all new business. In practice, however, many well-established businesses engage in highly successful entrepreneurship. The term, then, refers not to an enterprise's size or age but to a certain kind of activity. At the heart of that activity is innovation: what Peter Drucker defines as “the effort to create purposeful, focused change in an enterprise's economic or social potential.” In this paper, we are interested in the subset of small firms that innovate and are, therefore, entrepreneurial. On the threshold of the 21st century, in a single global economy, knowledge about events and opportunities in other countries has never before been as deep or immediately available. This knowledge has favored a rapid and dynamic growth in international trade and international financial flows. Consequently, nations are becoming increasingly dependent on each other's rational behavior. As economies become more interconnected with global trade and investment patterns, small- and medium-sized enterprises (SMEs) are becoming increasingly important pillars of the economies of the major trading partners. Smaller firms in the 1990s increased their share in exports and in-and-outward foreign direct investment in the OECD countries and in many Asian countries (OECD, 1996). This is not by chance. SMEs are likely to become more important as economies become more globally integrated because globalization is itself a process of entrepreneurial discovery. Firms that succeed in the global market must be innovative and able to hold on to the profit opportunities their innovations present. These are the same attributes a successful SME needs anywhere. Large established multinational firms are often poor places in which to launch radical innovations. Most large multinational firms are bureaucratic and hierarchical. They have grown large and successful using the techniques and routines they developed over decades and they are often profoundly conservative. Employees or managers with ideas about radical innovations are unlikely to gain much support within such a firm. Consequently, people with radical innovations typically establish their own companies, allowing them to control the innovation as it develops, and giving the innovators clear property rights over the innovations they create. However, this brings another set of problems. Small firms often have difficulty accessing resources needed to grow rapidly and reach world markets. The latter point is especially important, for quick access to large markets is often critical to the financial viability of a radically new product or process. If a small firm owns an innovation and is having difficulty taking it to foreign markets, government assistance is often available. For example, firms in the United States can obtain various types of financial assistance from the US Small Business Administration, the US Export–Import Bank, the Overseas Private Investment Corporation (OPIC), and the US Trade & Development Agency (TDA). These institutions offer a wide spectrum of support, ranging across long-term general loans, shorter-term trade credit financing, default insurance, advocacy, and information. Other governments have analogous programs though the precise type of assistance and the organizational structure of the agencies that provide it vary. In this study, we examine a typical institution of this kind, the Export Development Corporation (EDC), a Canadian state-owned enterprise that provides Canadian exporters with financial assistance such as trade credit arrangements and default insurance. We argue that this sort of support may not be the best approach. Large established multinational firms, regardless of what industry they are in, are present in many major markets, and they are experienced in applying or transferring ideas born in one country to operations or markets in another. Thus, small firms with innovations and large multinational firms might efficiently combine forces using the multinationals' foreign presence and experience at transferring technology and other ideas to foreign markets to bring the SME's innovation onto the world stage, especially when the innovation is radical and its life cycle short.2 Section 2 of this paper discusses the emergence of globalization. Section 3 examines the internationalization of innovation. Section 4 discusses direct versus indirect access to foreign markets by entrepreneurs. Section 5 discusses public policy as a response to market failure, and conclusions are presented in Section 6.