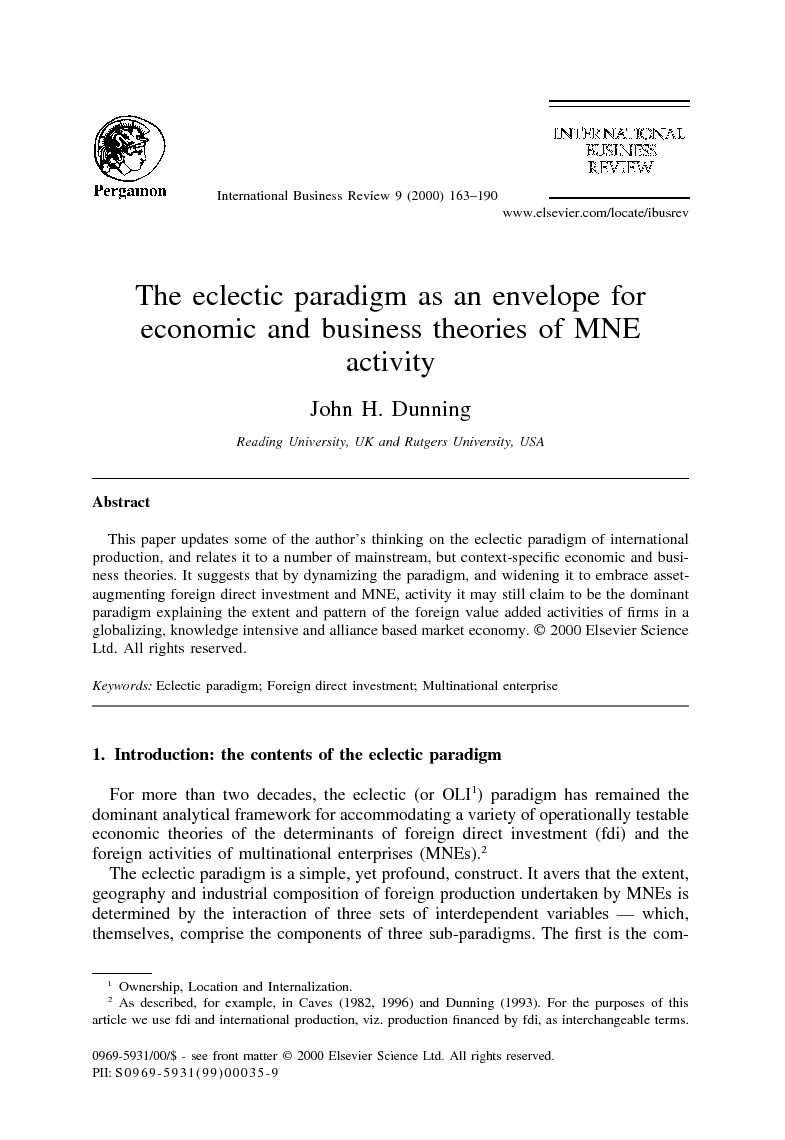 This paper updates some of the author's thinking on the eclectic paradigm of international production, and relates it to a number of mainstream, but context-specific economic and business theories. It suggests that by dynamizing the paradigm, and widening it to embrace asset-augmenting foreign direct investment and MNE, activity it may still claim to be the dominant paradigm explaining the extent and pattern of the foreign value added activities of firms in a globalizing, knowledge intensive and alliance based market economy.

For more than two decades, the eclectic (or OLI1) paradigm has remained the dominant analytical framework for accommodating a variety of operationally testable economic theories of the determinants of foreign direct investment (fdi) and the foreign activities of multinational enterprises (MNEs).2 The eclectic paradigm is a simple, yet profound, construct. It avers that the extent, geography and industrial composition of foreign production undertaken by MNEs is determined by the interaction of three sets of interdependent variables — which, themselves, comprise the components of three sub-paradigms. The first is the competitive advantages of the enterprises seeking to engage in fdi (or increase their existing fdi), which are specific to the ownership of the investing enterprises, i.e. their ownership (O) specific advantages. This sub-paradigm asserts that, ceteris paribus, the greater the competitive advantages of the investing firms, relative to those of other firms — and particularly those domiciled in the country in which they are seeking to make their investments — the more they are likely to be able to engage in, or increase, their foreign production. The second is the locational attractions (L) of alternative countries or regions, for undertaking the value adding activities of MNEs. This sub-paradigm avers that the more the immobile, natural or created endowments, which firms need to use jointly with their own competitive advantages, favor a presence in a foreign, rather than a domestic, location, the more firms will choose to augment or exploit their O specific advantages by engaging in fdi. The third sub-paradigm of the OLI tripod offers a framework for evaluating alternative ways in which firms may organize the creation and exploitation of their core competencies, given the locational attractions of different countries or regions. Such modalities range from buying and selling goods and services in the open market, through a variety of inter-firm non-equity agreements, to the integration of intermediate product markets, and an outright purchase of a foreign corporation. The eclectic paradigm, like its near relative, internalization theory,3 avows that the greater the net benefits of internalizing cross-border intermediate product markets, the more likely a firm will prefer to engage in foreign production itself, rather than license the right to do so, e.g. by a technical service or franchise agreement, to a foreign firm. The eclectic paradigm further asserts that the precise configuration of the OLI parameters facing any particular firm, and the response of the firm to that configuration, is strongly contextual. In particular, it will reflect the economic and political features of the country or region of the investing firms, and of the country or region in which they are seeking to invest; the industry and the nature of the value added activity in which the firms are engaged; the characteristics of the individual investing firms, including their objectives and strategies in pursuing these objectives; and the raison d'être for the fdi.

n the three previous sections we have suggested that, for the most part, the many and varied explanations of the extent and structure of fdi and MNE activity are complementary, rather than substitutable for, each other, and are strongly context specific. We have further observed that, as the international production by MNEs has grown and taken on new patterns, as the world economic scenario has changed, and as scholars have better understood the raison d'être for fdi, so new explanations of the phenomena have been put forward, and existing explanations have been modified and, occasionally, replaced. According to Kuhn (1962) and Foss, 1996 and Foss, 1997, an existing paradigm can accommodate several contrasting theoretical models as long as these are not addressing exactly the same questions or addressing these in the same context.33 At the same time, a paradigm that leaves no issues unresolved is of dubious value as a guide to further theorizing (Loasby, 1971). By contrast, a paradigm shift may be required when new phenomena arise which cannot be addressed within the existing paradigm, or where there are serious and irreconcilable conflicts among the theories contained in the paradigm. However, we believe that the criteria for a successful paradigm are more demanding. More specifically, we would mention three of these. The first is that the sum of the value of the constituent theories must be greater than the whole. This suggests that there are intellectual interdependencies or externalities to each of the theories, which a paradigm can ‘internalize’ through its integrated approach. It follows then that the more any general paradigm of international production can advance understanding about the determinants of its constituent parts, the more successful it may be judged. Viewed in this way, we would aver that dynamizing the eclectic paradigm, and recognizing the interdependence of the OLI components not only adds value of its original conception, but helps point the way to improving a variety of the individual theories it embraces. Second, we would aver that the strength of a paradigm also depends on the extent to which it can offer some generic hypotheses, or, indeed, predictions about the phenomena being studied. In the case of the earlier versions of the eclectic paradigm, we offered some general hypotheses about the nature of the relationship between the O L and I variables and fdi (Dunning, 1977 and Dunning, 1980). However, we did not think it appropriate to put forward specific hypotheses about the relationship between particular OLI variables and particular kinds of fdi — as the paradigm itself was not context specific. In the case of the contemporary version of the paradigm, which embraces alliance related and asset augmenting MNE activity, even generic hypotheses are harder to make without knowing whether a firm is contemplating a fdi to exploit a competitive strength or to overcome, or counteract, a competitive weakness. Only by treating the search for, and acquisition of, competitive advantages as part of the dynamic and cumulative process of sustaining and advancing O specific advantages (rather than a discrete and once and-for-all transaction) can this conundrum be resolved. This, then, suggests that the eclectic paradigm might better address itself to explaining the process of international production, than to its level and composition at a particular moment of time. Third, a paradigm may be judged to be robust if it continues to address relevant problems and offers a satisfying conceptual structure for resolving them (Loasby, 1971); and if there are no serious contenders to it. Here, it would be foolish to deny there are not other paradigms which seek to offer general explanations of the internationalization process of firms and/or their international management strategies. But, for the most part, we would not consider these to be competing paradigms. Managerial related paradigms, for example, are interested in explaining the behavior of managers in harnessing and utilizing scarce resources, not the overall level and pattern of fdi or MNE activity. Moreover, unlike fdi theories, they tend to be process oriented, unlike most fdi theories (Buckley, 1996). Organizational paradigms are directed to evaluating the costs and benefits of alternative institutional mechanisms for organizing a given set of resources and capabilities, independently of the location of these assets. Paradigms offered by marketing scholars usually focus on the process and/or form of international market entry and/or growth (Johanson & Vahlne, 1977, Luostarinen, 1979, Welch & Luostarinen, 1988 and Anderson & Gatignon, 1986). Technologically related paradigms of international production (Cantwell, 1989, Cantwell, 1994 and Kogut & Zander, 1994) come nearest to our own approach, but cannot comfortably explain fdi in developing countries and in some service sectors. With a few exceptions (notably Gray, 1996 and Markusen, 1995), modern paradigms of international trade ignore or downplay the significance of firm specific advantages. Finance related paradigms can offer only limited insights into the growth of corporate networks and cross-border strategic alliances. We conclude, then, that an add-on dynamic component to the eclectic paradigm, and an extension of its constituent parts to embrace both asset augmenting and alliance related cross-border ventures can do much to uphold its position as the dominant analytical framework for examining the determinants of international production. We believe that recent economic events, and the emergence of new explanations of MNE activity have added to, rather than subtracted from, the robustness of the paradigm. While accepting that, in spite of its eclecticism (sic), there may be some kinds of foreign owned value added activities which do not fit comfortably into its construction, we do believe that it continues to meet most of the criteria of a good paradigm; and that it is not yet approaching its own ‘creative destruction’ (Foss, 1996).34