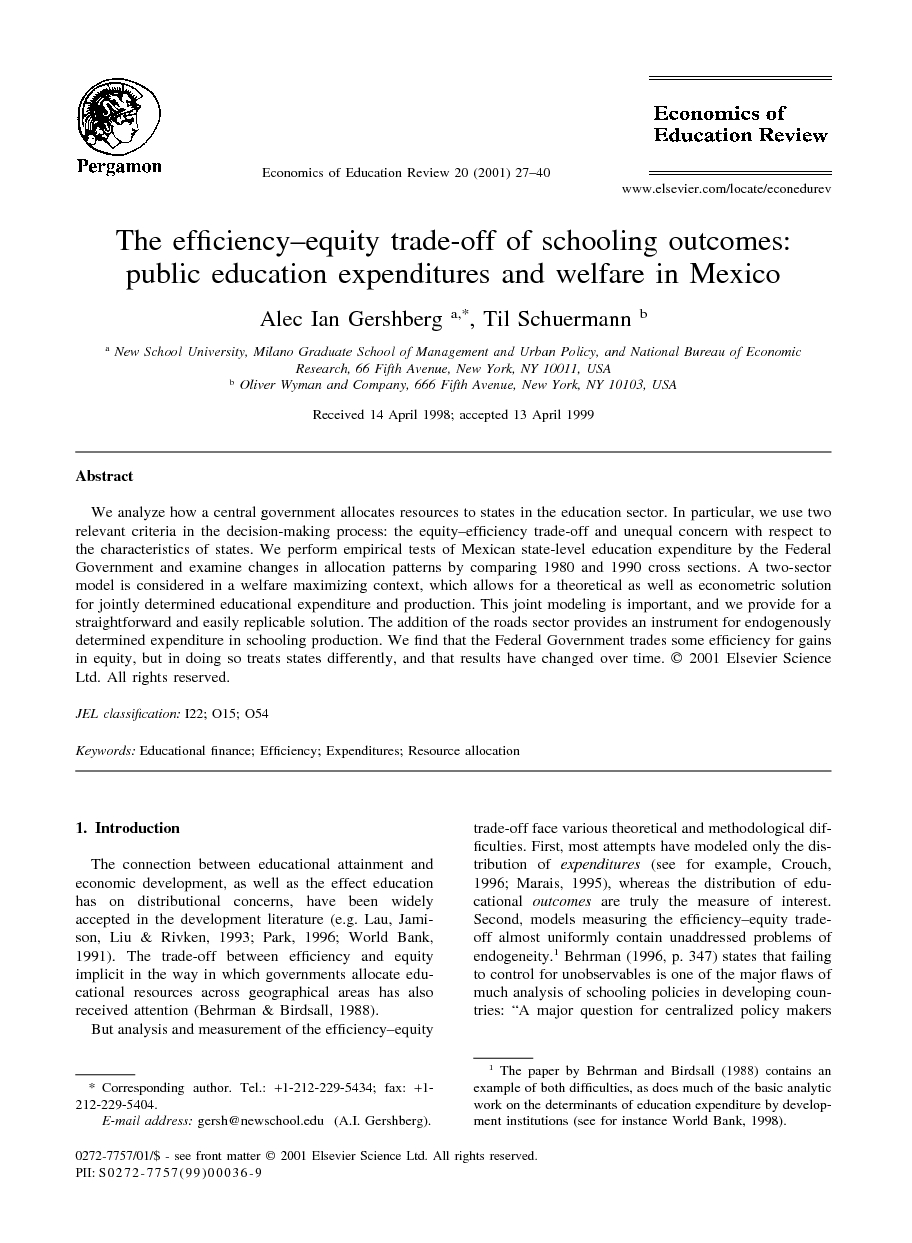 We analyze how a central government allocates resources to states in the education sector. In particular, we use two relevant criteria in the decision-making process: the equity–efficiency trade-off and unequal concern with respect to the characteristics of states. We perform empirical tests of Mexican state-level education expenditure by the Federal Government and examine changes in allocation patterns by comparing 1980 and 1990 cross sections. A two-sector model is considered in a welfare maximizing context, which allows for a theoretical as well as econometric solution for jointly determined educational expenditure and production. This joint modeling is important, and we provide for a straightforward and easily replicable solution. The addition of the roads sector provides an instrument for endogenously determined expenditure in schooling production. We find that the Federal Government trades some efficiency for gains in equity, but in doing so treats states differently, and that results have changed over time.

The connection between educational attainment and economic development, as well as the effect education has on distributional concerns, have been widely accepted in the development literature (e.g. Lau, Jamison, Liu & Rivken, 1993, Park, 1996 and World Bank, 1991). The trade-off between efficiency and equity implicit in the way in which governments allocate educational resources across geographical areas has also received attention (Behrman & Birdsall, 1988). But analysis and measurement of the efficiency–equity trade-off face various theoretical and methodological difficulties. First, most attempts have modeled only the distribution of expenditures (see for example, Crouch, 1996 and Marais, 1995), whereas the distribution of educational outcomes are truly the measure of interest. Second, models measuring the efficiency–equity trade-off almost uniformly contain unaddressed problems of endogeneity. 1 Behrman (1996, p. 347) states that failing to control for unobservables is one of the major flaws of much analysis of schooling policies in developing countries: “A major question for centralized policy makers and for analysts is whether it is possible to control for unobservables and for the relevant behavioral incentives in analysis of school policies.” He goes on to list instrumental variable approaches as among the most promising and calls for more research in this area. This study helps to answer that call (see also Akerhielm, 1995). We therefore model and estimate a welfare function that reveals the efficiency–equity trade-off resulting from the allocation of primary and secondary school expenditures by the Federal Government in Mexico. In doing so, we quantify the trade-off with respect to the educational outcomes observed in the 31 states, and we develop a methodology that considers the simultaneous determination of educational expenditures and outcomes. In addition, we explicitly account for the correlation between expenditure and average student endowments in the schooling production function. In particular, we analyze the Federal Government's allocations to states, and we explore two criteria often considered relevant in the decision-making process: (1) the equity–efficiency trade-off and (2) different treatment of states based on their socio-economic and political characteristics. The underlying structural welfare relation cannot be estimated directly because welfare is not observed; however, our analysis derives expressions in terms of behavioral input and output variables in order to unveil critical parameters of the welfare function.2 This is important because official policy statements from the Government never reveal such parameters3 and, while qualitative analysts such as Morales-Gómez and Torres (1990) have shown a keen acumen in discerning such parameters, such political analyses need sound quantitative studies to support them in the policy arena. In short, while other Latin American countries (e.g. Chile) have made advances in using formula grants to allocate educational resources transparently to sub-national jurisdictions, Mexico has not. Our analysis shows that the Mexican allocation pattern does not obviously incorporate rational or effective allocation patterns. We follow a model developed by Behrman and Craig (1987) and Craig (1987) in which a government with central authority allocates fixed total resources in a sector among the various localities under its control. In order to control for endogenously determined production of the public service, in their case crime prevention, Behrman and Craig (1987) use an instrumental variable approach whereas Craig (1987) uses 3SLS to estimate the whole public service expenditure–production system. In contrast to Behrman and Craig (1987), our model involves the simultaneous determination of two public service sectors, education and roads, which will allow for various different solutions to the endogeneity of production problem. Specifically, while it is straightforward to address the simultaneous determination of educational expenditures and outcomes, this is only possible if, in the schooling production function, average student endowments are not correlated with educational expenditures. Since we cannot reasonably make this assumption, we must use expenditures from another public service, such as roads, to serve as an instrument for educational expenditure. This joint modeling is important and we provide for a straightforward and easily replicable solution. We thus hope to help fill the gap highlighted in Behrman (1996) (p. 348) by providing a useful “statistical procedure to control for choices in the presence of unobserved variables.” We hypothesize that this central government allocates resources in the education sector as if to maximize a social welfare function, considering public service outcomes as a function of inputs. 4 The model yields the distributional concerns (vis-à-vis localities under its control) of the central government implicit in the observed choice of outcome allocation. We test the model on Mexican state-level data from 1980 and 1990.5 We also provide an empirical exploration of several phenomena widely analyzed by political scientists in a more qualitative manner, such as the influence of voting behavior and political opposition on federal allocations.

5. Summary and conclusions We have presented an adaptation of a model in which a government with central authority allocates resources and outcomes in a public service sector as if to maximize a social welfare function. This function is increasing in its two arguments, population and public service outcome; however, the central authority cannot directly choose the levels of these outcomes and must use its indirect control through both public service inputs (expenditures) and its impression of the public good technology. Employing a Kohm–Pollak welfare function allows us to measure the extent of the efficiency–equity trade-off (inequality aversion) and unequal concern among sub-central jurisdictions on the part of the central authority. Few studies of this kind have been performed on LDCs, even though this particular methodology seems readily adaptable to many developing economies. We perform estimations on two cross-sectional Mexican data sets of the central Government's state level allocations in the education sector for 1980 and 1990, while providing a non-data-intensive means for dealing with the exogeneity problems that arise. This kind of analysis is important because it could potentially yield knowledge unavailable through other means, since many LDC governments, including Mexico's, are secretive and non-transparent about the manner in which they allocate education funds.41 We wish also to emphasize that we performed this analysis primarily with data that are generally available in published form in most countries. For both years we find that the Federal Government does in fact display some inequality aversion nationally, and that this result holds for two different measures of educational service outcomes. However, we cannot say that the level of inequality aversion is strong or, more importantly, consistent across various measures and time periods. In addition, we find that unequal concern among states exists with respect to certain specific state characteristics, but the Government's behavior vis-à-vis these characteristics did in fact change from 1980 to 1990. This study may serve as a benchmark for developing policies for the decentralization of finance in the educational sector in Mexico. Specifically, any means by which resources were to be decentralized to the state's discretion (e.g. matching grants) ought to consider the effects, both positive and negative, on redistribution with respect both to (public service) outcomes and the median incomes in the state. Meanwhile, some of the results with respect to unequal concern for states indicate the possibility for fiscal decentralization to eliminate some of the factors involved in resource allocation that pertain little to the supposed goal of financing the sector: increased educational performance. With respect to educational investments, this study points out that the Federal Government's maintaining the purse strings for most educational allocations may indeed allow it to redistribute resources among regions, and that it may indeed do so. However, the practice also retains the possibility of using educational investment for political leverage, and inconsistent, at best, equity enhancement. Formula-driven allocations to states is one obvious solution.