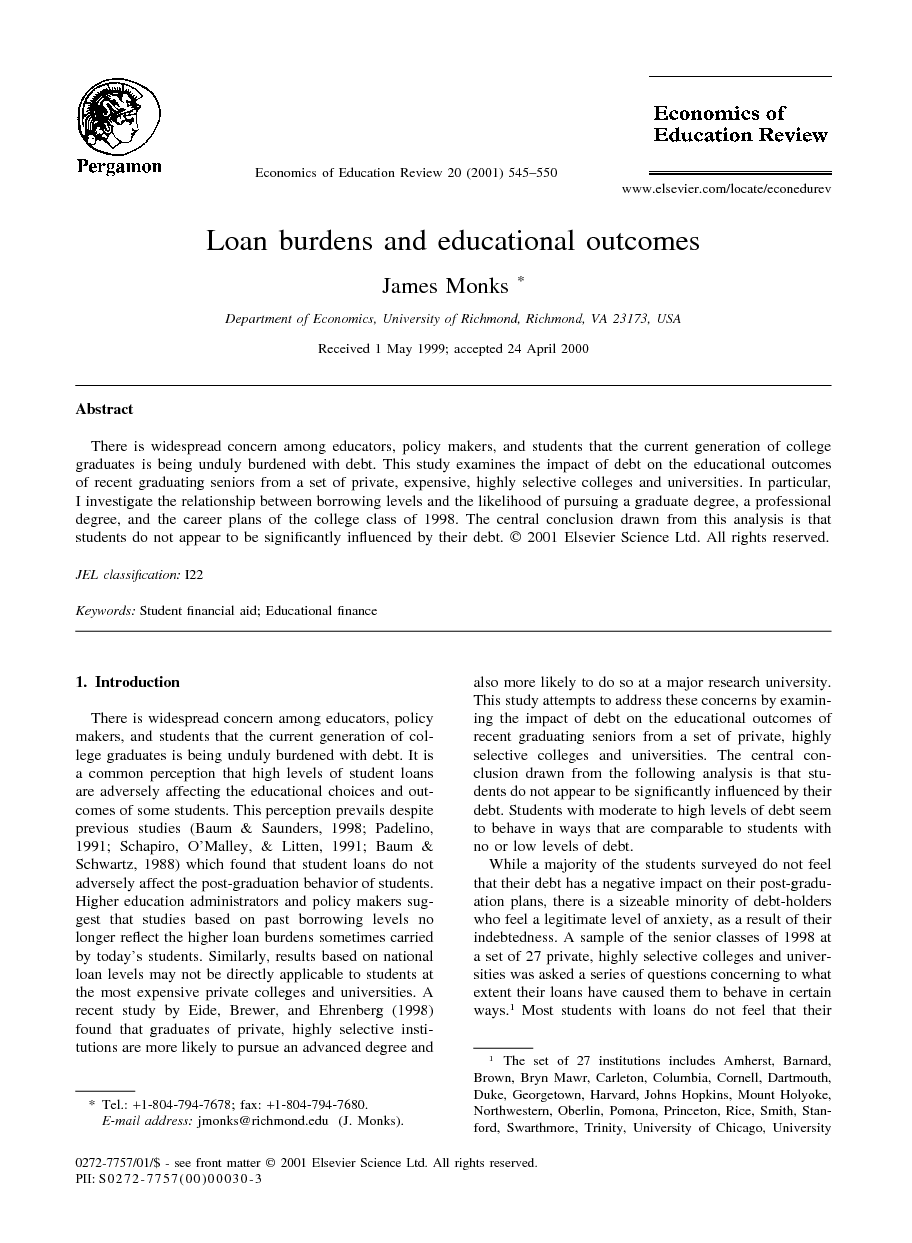 There is widespread concern among educators, policy makers, and students that the current generation of college graduates is being unduly burdened with debt. This study examines the impact of debt on the educational outcomes of recent graduating seniors from a set of private, expensive, highly selective colleges and universities. In particular, I investigate the relationship between borrowing levels and the likelihood of pursuing a graduate degree, a professional degree, and the career plans of the college class of 1998. The central conclusion drawn from this analysis is that students do not appear to be significantly influenced by their debt.

There is widespread concern among educators, policy makers, and students that the current generation of college graduates is being unduly burdened with debt. It is a common perception that high levels of student loans are adversely affecting the educational choices and outcomes of some students. This perception prevails despite previous studies (Baum & Saunders, 1998, Padelino, 1991, Schapiro, O'Malley, & Litten, 1991 and Baum & Schwartz, 1988) which found that student loans do not adversely affect the post-graduation behavior of students. Higher education administrators and policy makers suggest that studies based on past borrowing levels no longer reflect the higher loan burdens sometimes carried by today's students. Similarly, results based on national loan levels may not be directly applicable to students at the most expensive private colleges and universities. A recent study by Eide, Brewer, and Ehrenberg (1998) found that graduates of private, highly selective institutions are more likely to pursue an advanced degree and also more likely to do so at a major research university. This study attempts to address these concerns by examining the impact of debt on the educational outcomes of recent graduating seniors from a set of private, highly selective colleges and universities. The central conclusion drawn from the following analysis is that students do not appear to be significantly influenced by their debt. Students with moderate to high levels of debt seem to behave in ways that are comparable to students with no or low levels of debt. While a majority of the students surveyed do not feel that their debt has a negative impact on their post-graduation plans, there is a sizeable minority of debt-holders who feel a legitimate level of anxiety, as a result of their indebtedness. A sample of the senior classes of 1998 at a set of 27 private, highly selective colleges and universities was asked a series of questions concerning to what extent their loans have caused them to behave in certain ways.1 Most students with loans do not feel that their debt has had a significant effect on their post-graduation choices. On the other hand, approximately 20% agreed to a moderate or great extent (versus not at all or a little) that their loans have caused them to postpone graduate or professional school. Almost 25% stated that their loans caused them to restrict their graduate school choices to those with significant financial aid; 10% stated that debt led them to choose a professional degree rather than an arts and sciences graduate degree; and over 30% felt that their loans caused them to focus their job search on higher paying fields. Despite the apparent level of angst felt by some students concerning their debt, and their stated impression that it is having a negative impact on their post-graduation choices, there is scarce evidence that this is indeed the case. Fig. 1 shows the percentage of students who applied to graduate or professional school, plan on attending graduate or professional school in the fall, have long-term plans to acquire an advanced degree (whether they plan on attending in the fall or not), applied to a professional degree program (as a percentage of only those who applied to graduate or professional school), and those who changed their career plans over their 4 years in college to a high paying job (business, consulting, computer science, engineering, law, and medicine), by debt levels. Students with what would normally be considered high levels of self-reported debt, US$15,000 and above, are only slightly less likely to have applied to graduate or professional school and plan to attend in the fall than students without loans.3 There do not appear to be any significant differences in the percentage of students with long-term advanced degree plans and in the percentage who changed career plans from a lower paying to a higher paying profession, across levels of debt. It is interesting to note that for some reason students with low levels of debt appear less likely to apply to a professional degree program, among those students who apply to graduate school. The general conclusion based on Fig. 1 is that students with high levels of debt appear to behave in ways that are quite comparable to students with no or low levels of borrowing. An examination of the data for students with parental income of US$50,000 or less revealed a similar pattern. The post-graduation plans of low-income students appeared to be uninfluenced by their level of indebtedness.

Earlier studies also found that loan burdens did not have a significant impact on advanced degree plans. Studies by Schapiro et al. (1991) using similar data from 1982 to 1989 found no significant impact of loans on the post-graduation plans and behavior of students from private, highly selective institutions. A more recent analysis by Baum and Saunders (1998), using Nellie Mae data, also concluded that high levels of borrowing do not have a significant influence on the post-graduation outcomes of students relative to low levels of debt. While a majority of student borrowers do not feel overly burdened by their level of indebtedness, a sizeable minority of borrowers does feel adversely affected by their student loans. Despite these feelings of anxiety, student loans do not appear to have a significant impact on the post-graduation plans of students, in terms of planning to attend graduate or professional school in the fall following graduation, the type of degree program sought, and the career plans of seniors. These findings are consistent with previous analyses of past graduating classes from private, selective institutions and more recent studies of borrowers from a national sample of students.