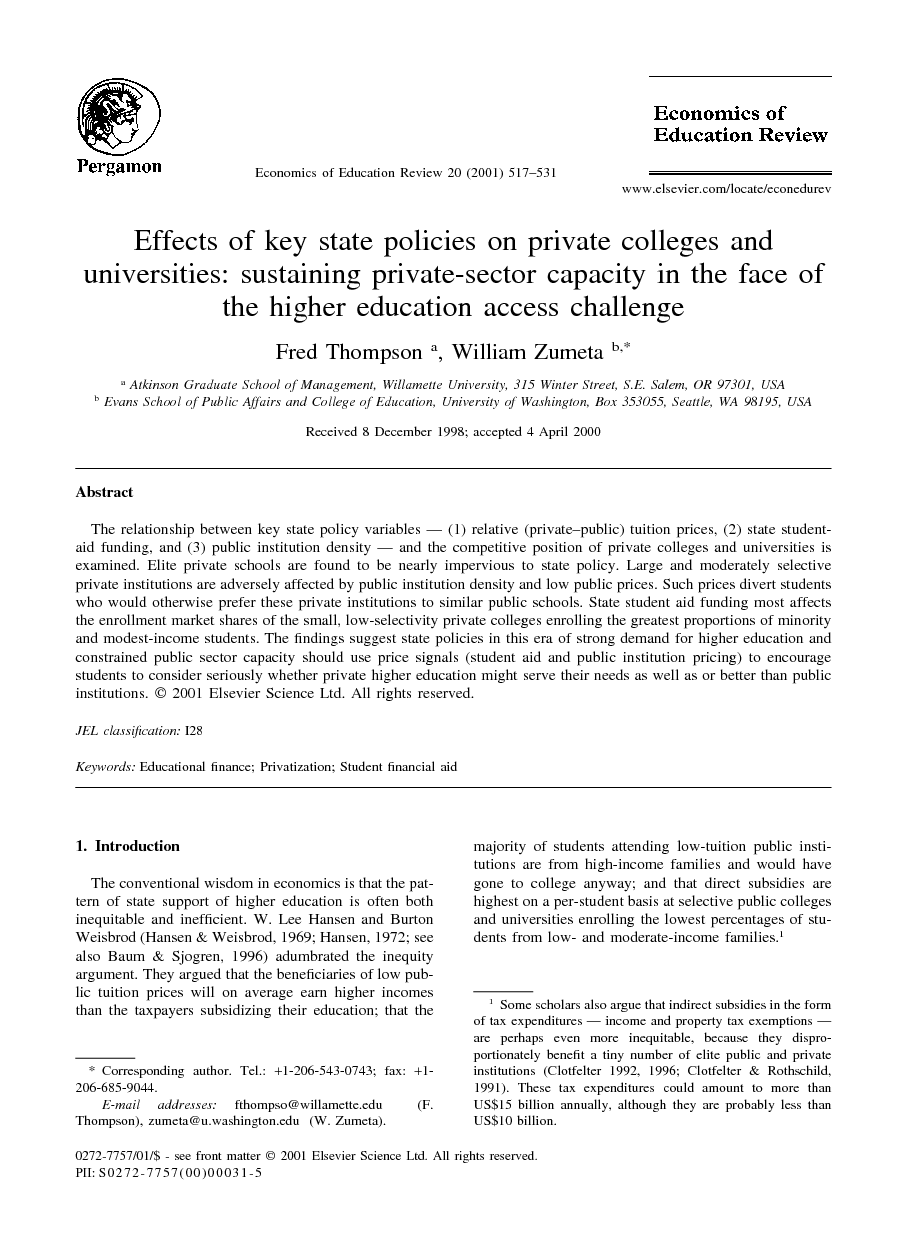 The relationship between key state policy variables — (1) relative (private–public) tuition prices, (2) state student-aid funding, and (3) public institution density — and the competitive position of private colleges and universities is examined. Elite private schools are found to be nearly impervious to state policy. Large and moderately selective private institutions are adversely affected by public institution density and low public prices. Such prices divert students who would otherwise prefer these private institutions to similar public schools. State student aid funding most affects the enrollment market shares of the small, low-selectivity private colleges enrolling the greatest proportions of minority and modest-income students. The findings suggest state policies in this era of strong demand for higher education and constrained public sector capacity should use price signals (student aid and public institution pricing) to encourage students to consider seriously whether private higher education might serve their needs as well as or better than public institutions.

America's mixed system of competitive independent and public institutions is generally seen around the world as exemplary. Private (nonprofit) colleges and universities enroll about 30 percent of all baccalaureate students in the US and graduate their students at a higher rate than public institutions. Their capacity should be especially valuable during the coming decade when, in most states, the number of students graduating from high school will continue to increase (Western Interstate Commission on Higher Education, 1998). In many of those states, public systems are nearly full and it would be costly to expand them. Moreover, investments in the expansion of public systems could not be easily — let alone, costlessly — undone were new technology to render much of current higher education delivery systems obsolete. Despite the benefits of relying more heavily on private colleges and universities, some public policies continue to threaten their health: large private–public tuition-price differentials and the low level of public funding for student aid in many states. The results reported here suggest that these policies could reduce enrollments in private colleges and universities at the same time that this capacity is most needed. The basic policy idea underlying this paper is that, facing an era when demands for higher education are likely to strain public sector capacity and create pressures for costly expansion thereof, it is desirable for policymakers to have access to empirical analysis that sheds light on the relationship between state policies and enrollments in private higher education. Private-sector capacity might be employed as a partial substitute for costly additional public-sector capacity if it could be shown that private institutions respond discernibly and desirably to state policies. For example, as our empirical analysis suggests, states might seek purposively to redirect some enrollment demand from the public to the private sector by simultaneously increasing public institution prices (tuition) substantially while also expanding need-based student aid. The former step could generate additional revenue to help fund the latter one and, if additional aid were need-based and sufficient, students of modest incomes could theoretically be “held harmless”.16 Table 4 in particular shows that private enrollments at the institution level did respond in predictable ways and at significant levels to plausible state policy variables in analyses using well-specified models of the enrollment market in higher education during a relatively recent period. This argues that the approach merits at least further state-specific study in jurisdictions with both strong growth in demand for higher education and an ample private academic sector.