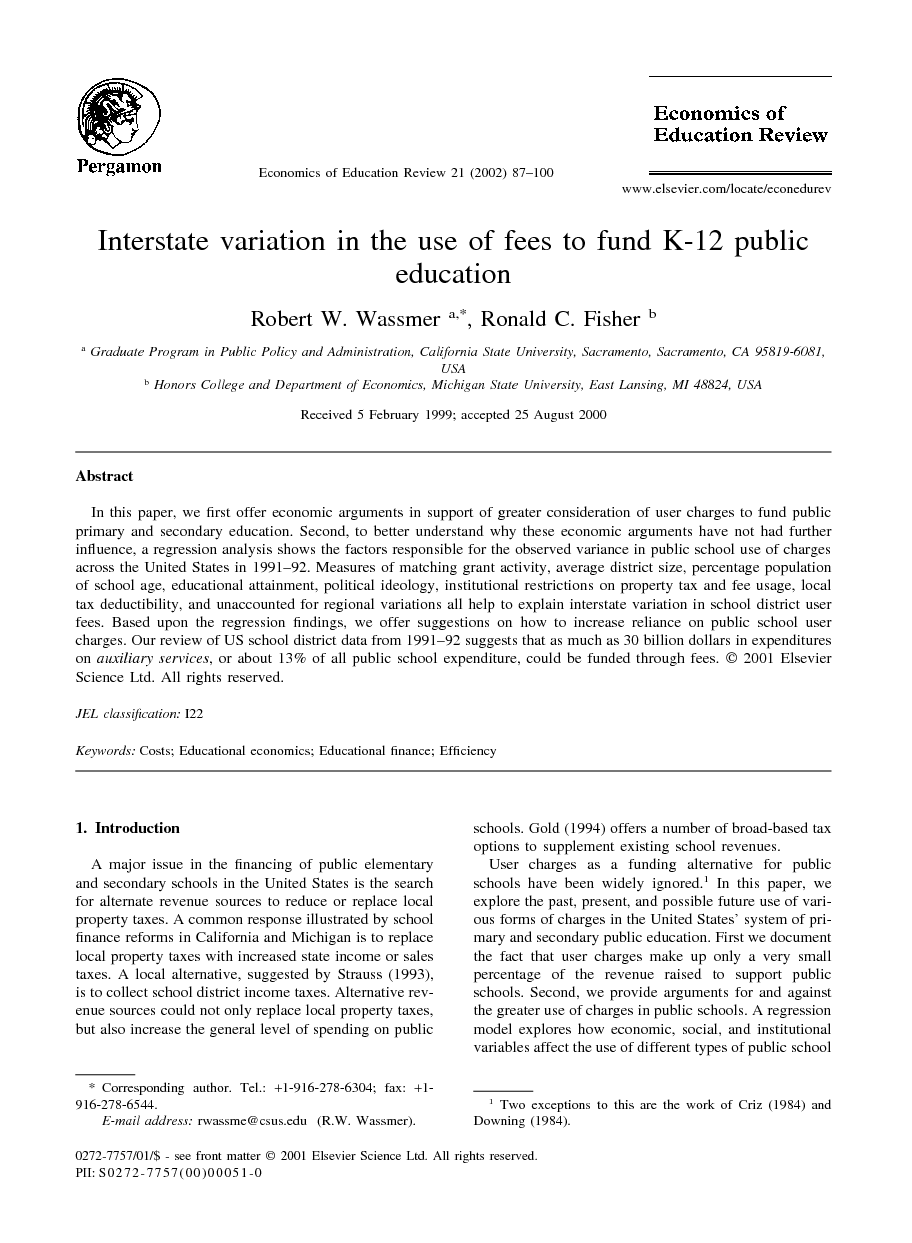 In this paper, we first offer economic arguments in support of greater consideration of user charges to fund public primary and secondary education. Second, to better understand why these economic arguments have not had further influence, a regression analysis shows the factors responsible for the observed variance in public school use of charges across the United States in 1991–92. Measures of matching grant activity, average district size, percentage population of school age, educational attainment, political ideology, institutional restrictions on property tax and fee usage, local tax deductibility, and unaccounted for regional variations all help to explain interstate variation in school district user fees. Based upon the regression findings, we offer suggestions on how to increase reliance on public school user charges. Our review of US school district data from 1991–92 suggests that as much as 30 billion dollars in expenditures on auxiliary services, or about 13% of all public school expenditure, could be funded through fees.

A major issue in the financing of public elementary and secondary schools in the United States is the search for alternate revenue sources to reduce or replace local property taxes. A common response illustrated by school finance reforms in California and Michigan is to replace local property taxes with increased state income or sales taxes. A local alternative, suggested by Strauss (1993), is to collect school district income taxes. Alternative revenue sources could not only replace local property taxes, but also increase the general level of spending on public schools. Gold (1994) offers a number of broad-based tax options to supplement existing school revenues. User charges as a funding alternative for public schools have been widely ignored.1 In this paper, we explore the past, present, and possible future use of various forms of charges in the United States' system of primary and secondary public education. First we document the fact that user charges make up only a very small percentage of the revenue raised to support public schools. Second, we provide arguments for and against the greater use of charges in public schools. A regression model explores how economic, social, and institutional variables affect the use of different types of public school charges across the fifty states and the District of Columbia. As Tannenwald (1990) points out, the degree to which a state relies on charges to finance its public schools should depend on its priorities and institutional restrictions concerning competing principles of taxation. Our empirical work sheds light on the statewide factors that help determine priorities regarding the use of charges in K-12 public education.

Categorical data only available from the early 1990s confirm that with the exception of lunch fees, school district user charges are employed to a minimal degree in the United States. Conventional economic analysis suggests, however, that the potential for efficiency and even equity gains in financing public education exist if school districts across the United States used fees to a greater degree than now. Many school districts provide auxiliary services (such as meals, transportation, childcare, extracurricular activities and clubs, driver's education, adult education, and access to various capital goods) for which benefits are substantially private and users easily identified and excluded. For 1991–92, expenditure on these services across all US school districts was approximately 13% of all expenditure. For many of these services the administration and/or collection costs associated with user charges would not be high. The greater use of fees to fund the provision of auxiliary services would also increase the revenue available from general taxes to support the additional provision of core primary and secondary education services. Our regression analysis suggests that fees in public schools are used more in states where a smaller percentage of total revenue is raised locally, there are fewer public school children, there are more low income people, the average school district exhibits a high student density, there are more rural areas, voters are more politically Liberal, matching state aid is in greater use, local taxes and fees are deductible toward state income taxes, and local property tax use is limited but school fees are not. Nevertheless, there are substantial regional influences on fee choice as well, implying attitudes or effects not captured by these economic, social, political, and institutional variables. Several implications follow from this. The existence of services that provide private benefits to a subset of students is important to the use of charges in public education. If a district has a relatively homogeneous population (for instance a district population composed of mostly families with school-age children), then the arguments for charges are less important. By their choice of residence, families essentially receive the same services they all desire in aggregate. Similarly, in a district with low student density, essentially all of the students are likely to use school-provided transportation and other services (such as recreation). In that instance, financing these auxiliary services with general local taxes is likely to not create substantial enough inefficiencies to warrant a system of user charges. Though exceptions to these generalizations arise where private substitutes are available and consumption of public school auxiliary services are highly variable (such as certain extracurricular or recreational activities). When greater variation or degrees of involvement in the auxiliary services provided by public schools exists, auxiliary services provided by the schools provide direct benefits to subsets of students and their parents, and make user fees more attractive for both efficiency and equity reasons. Our regression evidence suggests that school charges are used relatively more in these types of areas (high student density districts and those where private schools are more important). Nevertheless, even when the potential for user charge finance exists, our regression results also suggest that state and local policymaker need to explain the advantages of user fees clearly. Charges are not the expected or first-choice revenue source for schools. If greater charges in public education are the goal, at least for auxiliary services, the case for them must be thoughtfully developed, carefully disseminated to the public, and fully understood by voters. In turn, states need to provide further revenue autonomy to school districts by removing or easing legal restrictions on the use of charges for auxiliary services. Finally, both states and local school districts need to find ways of choosing and collecting charges that address widely held equity concerns. Given the strong historical role that equity and the concept of a merit good have played in education finance, citizens are more comfortable with charges when equity concerns are handled. We have shown that when poverty concerns are handled with federal grants, as in the case of school lunch fees, then the effect of the economic and social factors that determine the relative use of fees across states are reduced and fees are used to a greater magnitude. Our analysis suggests, at the very least, that policymakers pay greater attention to the potential and possibility of public school user charges. In terms of research direction, one obvious improvement would be to examine fee utilization at the level of individual districts or schools. Another possible research approach, taken by Brunner and Sonstelie (1998) would be a further examination of the role of parent councils, school foundations, and similar entities in financing school services through user charges not recorded by the traditional method employed by the US Census Bureau.