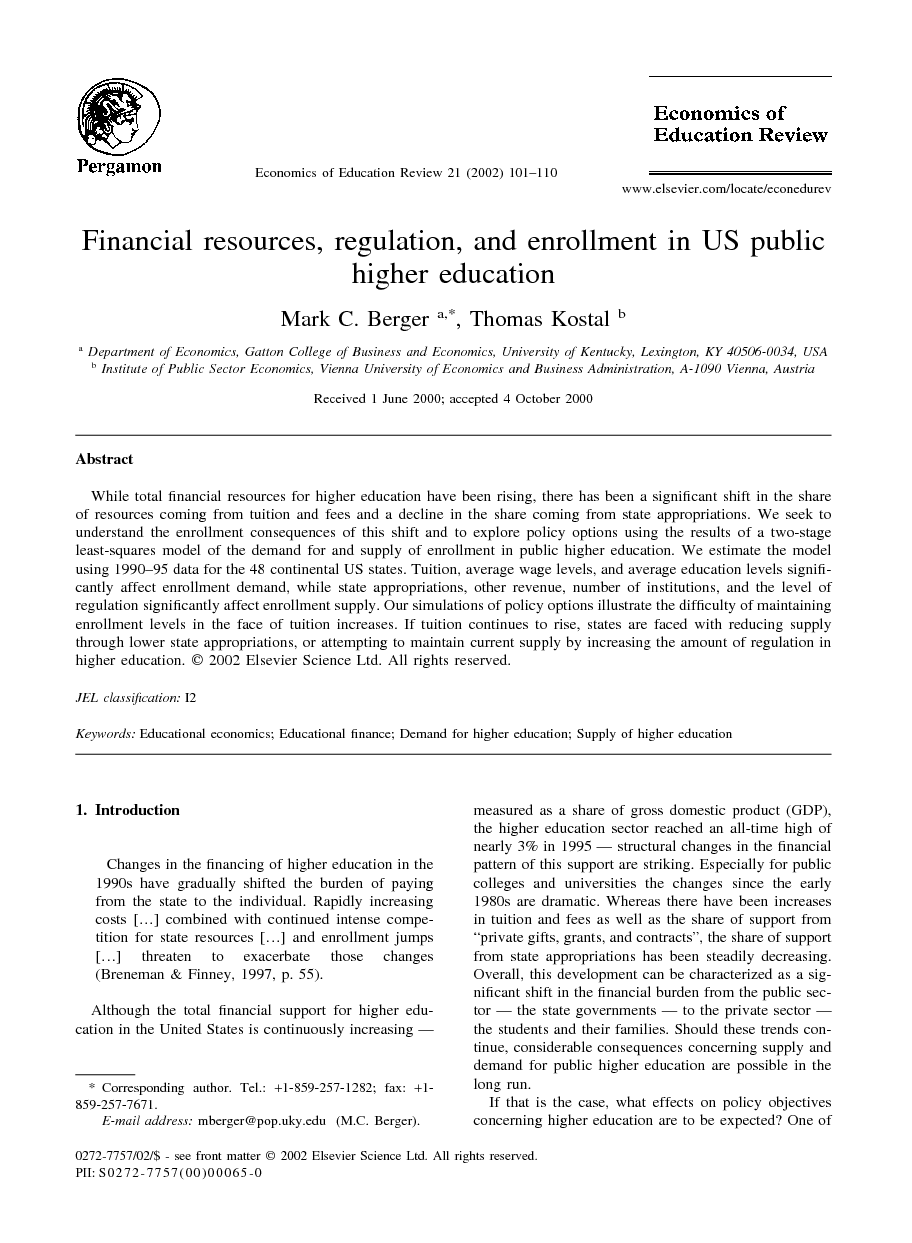 While total financial resources for higher education have been rising, there has been a significant shift in the share of resources coming from tuition and fees and a decline in the share coming from state appropriations. We seek to understand the enrollment consequences of this shift and to explore policy options using the results of a two-stage least-squares model of the demand for and supply of enrollment in public higher education. We estimate the model using 1990–95 data for the 48 continental US states. Tuition, average wage levels, and average education levels significantly affect enrollment demand, while state appropriations, other revenue, number of institutions, and the level of regulation significantly affect enrollment supply. Our simulations of policy options illustrate the difficulty of maintaining enrollment levels in the face of tuition increases. If tuition continues to rise, states are faced with reducing supply through lower state appropriations, or attempting to maintain current supply by increasing the amount of regulation in higher education.

Changes in the financing of higher education in the 1990s have gradually shifted the burden of paying from the state to the individual. Rapidly increasing costs […] combined with continued intense competition for state resources […] and enrollment jumps […] threaten to exacerbate those changes (Breneman & Finney, 1997, p. 55). Although the total financial support for higher education in the United States is continuously increasing — measured as a share of gross domestic product (GDP), the higher education sector reached an all-time high of nearly 3% in 1995 — structural changes in the financial pattern of this support are striking. Especially for public colleges and universities the changes since the early 1980s are dramatic. Whereas there have been increases in tuition and fees as well as the share of support from “private gifts, grants, and contracts”, the share of support from state appropriations has been steadily decreasing. Overall, this development can be characterized as a significant shift in the financial burden from the public sector — the state governments — to the private sector — the students and their families. Should these trends continue, considerable consequences concerning supply and demand for public higher education are possible in the long run. If that is the case, what effects on policy objectives concerning higher education are to be expected? One of the major objectives, especially for public institutions, is to provide broad access to higher education. However, shifting the financial burden from state government to students and their families appears to work against the objective of maintaining broad access to higher education. Currently, the policy responses to this financial development seem to be just short-term oriented or ad hoc in nature. Long-term oriented state policies are essential, in particular, to maintain or improve access to higher education programs and to secure affordability for the future (Breneman & Finney, 1997, pp. 51–52). For a more complete understanding of the various policy options, empirical evidence on both supply-side and demand-side effects of the recent financial developments is necessary. While there are many studies dealing with the demand for higher education (e.g., Becker, 1990; Heller, 1999; Leslie & Brinkman, 1987; McPherson & Schapiro, 1991; Wetzel, O'Toole, & Peterson, 1998) and there are some supply-side studies (e.g., Ehrenberg, Rees, & Brewer, 1993; McPherson & Schapiro, 1993), there are very few studies that consider both demand and supply forces (e.g., Hoenack & Pierro, 1990; Quigley & Rubinfeld, 1993). For public colleges and universities it is sometimes argued that the supply side does not matter when estimating the parameters of demand — and vice versa — because public institutions are not free to retain revenues from increased tuition charges and, typically, they have open admittance policies (Becker, 1990, pp. 162–163). However, this may no longer be the case in the wake of the recent financial developments described above. To shed light on these issues, this study analyzes the determinants of enrollment in public higher education, simultaneously considering both demand and supply forces. We pay particular attention to the extent to which differing financial resources, most notably tuition and state and local appropriations, influence the enrollment rate in public higher education in the United States. We estimate our demand and supply model for higher education using 1990–95 data for the 48 continental US states. Our estimates provide evidence on the magnitudes of the effects of various supply and demand forces on public higher education enrollment, and allow us to simulate the effects of various options facing policymakers in states in the US. The paper is divided into six sections. Section 2 provides an overview of the data used in the analysis. Section 3 describes the econometric model, particularly the demand and supply equations. In Section 4, the empirical results are presented and analyzed. In Section 5 we present the results of some simulations that show the likely enrollment changes caused by different policy options. A brief conclusion is found at the end of the paper (Section 6).

In this study a simultaneous demand and supply model is estimated to explain enrollment in public higher education in the United States. Particular concern was paid to the impact of financial resources — tuition as well as state and local appropriations — on enrollments. Most of the empirical results bore out the underlying theoretical hypotheses. With regard to demand for public higher education, tuition proves to be the most significant variable: as tuition increases the enrollment rate decreases. However, the strongest impact on the level of the average enrollment rate comes from the already existing general educational level in a state. Foregone earnings, prices of private alternatives, income, and the unemployment rate have much smaller effects. Our proxy for the investment motive, the relative wage differential, has a sizable effect (but statistically insignificant) on enrollment. On the supply side, the enrollment rate is influenced positively by available funds (except tuition) and the relative size of the higher education sector within a certain state and negatively by the scope of autonomy of colleges and universities. Tuition, faculty salaries, and enrollments at private institutions have comparatively weak impacts on enrollments in the public higher education sector. The findings of this study have important policy consequences. Our policy simulations suggest — if one of the major goals for public colleges and universities is to maintain a high enrollment rate in higher education — that it is important to ensure a reasonable level of tuition and a sufficient amount of state and local appropriations. If the latter is not possible — particularly due to tight state budgets — a more rigid regulation system may be an alternative policy option for the states. In states without such measures, absent continuing upward trends in the returns to college education, the enrollment rate in public higher education is likely to decline in the long run.