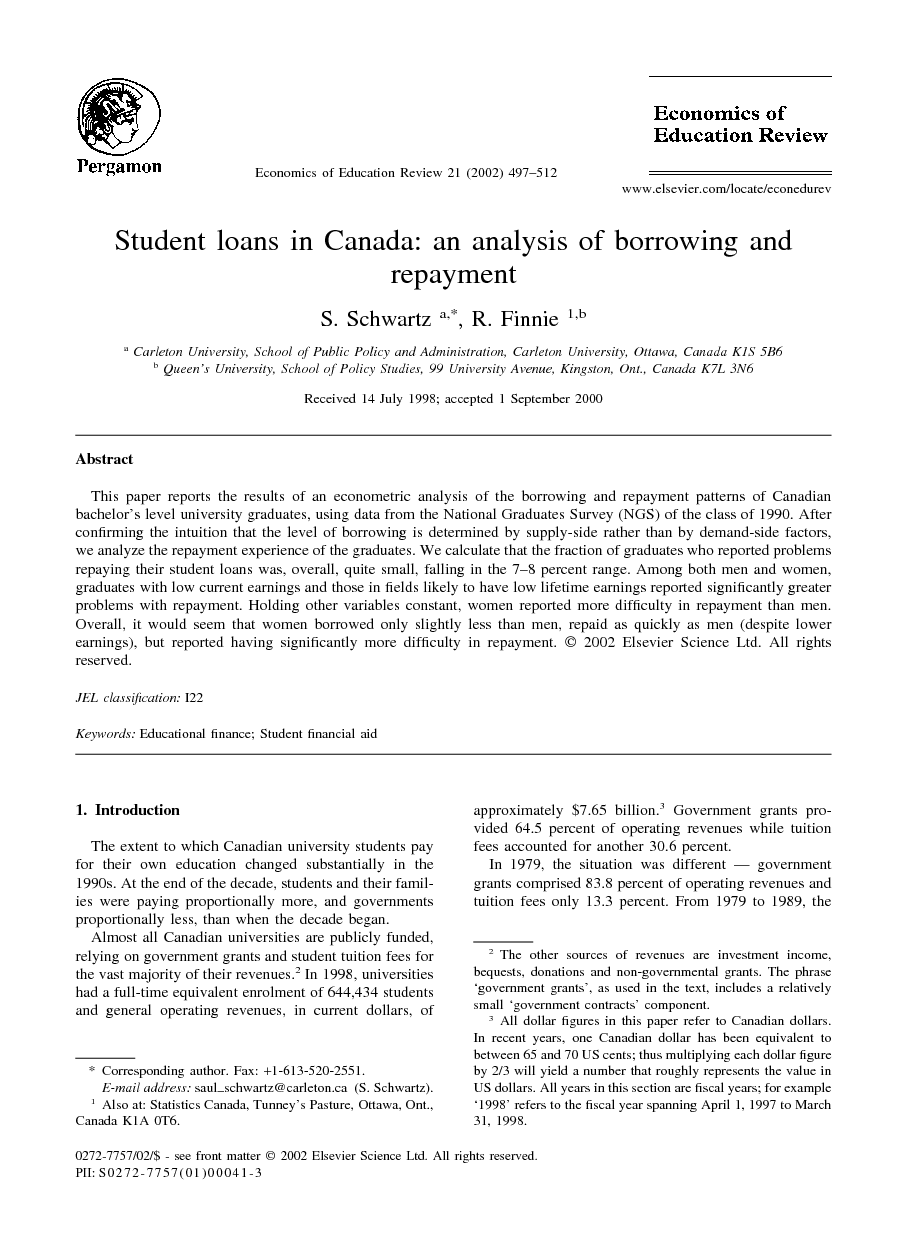 This paper reports the results of an econometric analysis of the borrowing and repayment patterns of Canadian bachelor's level university graduates, using data from the National Graduates Survey (NGS) of the class of 1990. After confirming the intuition that the level of borrowing is determined by supply-side rather than by demand-side factors, we analyze the repayment experience of the graduates. We calculate that the fraction of graduates who reported problems repaying their student loans was, overall, quite small, falling in the 7–8 percent range. Among both men and women, graduates with low current earnings and those in fields likely to have low lifetime earnings reported significantly greater problems with repayment. Holding other variables constant, women reported more difficulty in repayment than men. Overall, it would seem that women borrowed only slightly less than men, repaid as quickly as men (despite lower earnings), but reported having significantly more difficulty in repayment.

The extent to which Canadian university students pay for their own education changed substantially in the 1990s. At the end of the decade, students and their families were paying proportionally more, and governments proportionally less, than when the decade began. Almost all Canadian universities are publicly funded, relying on government grants and student tuition fees for the vast majority of their revenues.2 In 1998, universities had a full-time equivalent enrolment of 644,434 students and general operating revenues, in current dollars, of approximately $7.65 billion.3 Government grants provided 64.5 percent of operating revenues while tuition fees accounted for another 30.6 percent. In 1979, the situation was different — government grants comprised 83.8 percent of operating revenues and tuition fees only 13.3 percent. From 1979 to 1989, the number of students (on a full-time equivalent basis) rose by 38 percent, creating the need for increased university operating expenditures. Real government grants did not keep pace, rising by just 11 percent. In an effort to cover the growing gap between operating expenditures and government grants, universities raised tuition fees, over this period, by 7 percent more than the Consumer Price Index. These trends continued into the 1990s. Overall university enrolments, on a full-time equivalent basis, grew by just under 4 percent in the 1990–1998 period. At the same time, large federal and provincial budget deficits affected the level of real government grants. In fiscal 1989, those grants were $3.9 billion in 1986 dollars and hit a peak of $4.3 billion in fiscal 1993. By fiscal 1997, government grants had fallen to $3.6 billion, below their 1989 level. Since Canadian universities have no important revenue sources beyond government grants and tuition fees, the latter were bound to rise.4 In the 1989–1997 period, real tuition fees rose from $8.0 to $15.4 billion, an increase of 93 percent. The 1990s shift in the burden of university finances is clear. In real dollars, on a per student basis, government grants fell from $7569 in 1990 to $5543 in 1997, while tuition fees rose from $1363 to $2385 and expenditures fell by $800. Note, however, that full-time equivalent enrolments continued to grow despite the increased burden shouldered by students and their families and even though the number of 19- to 24-year-olds in 1997 was only 82 percent of what it had been in 1980. Between 1980 and 1997, enrolments grew by 42 percent even though real tuition fees grew by 289 percent. In the 1980s, when tuition fees were relatively low, the majority of university students were able to finance their education without direct government assistance. For potential students who needed financial aid because of low family income, grants were available from provincial programs. The major source of loans, for those who qualified by dint of low family income, was the federally funded Canada Student Loans Program (CSLP). Between 1984 and 1994, even though tuition fees were increasing, the maximum that could be borrowed from the federal CSLP remained constant. In 1994, the CSLP finally made more loan money available by increasing the maximum that could be borrowed by more than 50 percent.5 The provincial response to increased tuition fees varied, but the tendency was to replace provincial grant programs with provincial loan programs; that substitution allowed the same amount of subsidy dollars to put more money into the hands of students. One set of questions raised by these changes is normative. Who should pay for higher education? What is the share that should be shouldered by students themselves, by their parents and by the government? What are reasonable debt loads for graduates? Despite the importance of these normative issues, they are left to other discussions. In this paper, we address two important empirical questions concerning student borrowing and repayment by analyzing the experience of a sample of individuals who graduated with Bachelor's degrees from Canadian post-secondary institutions in 1990. The questions are: • Did students borrow as much as they were offered during this period or, alternatively, did demand-side factors play an important role?6 • Which groups of borrowers, if any, were most burdened by their loan repayment?

This paper reports the results of an econometric analysis of the borrowing and repayment patterns of recent Bachelor's level university graduates using data from the NGS of the class of 1990. The study exploits the unique combination of information concerning student loans, educational experiences, and early labour market outcomes available in the NGS data. We ask two questions of the data. First, did demand-side factors — such as gender or field of study — play an important role in determining the probability that graduates borrowed or was borrowing constrained largely by program rules? Second, which groups of borrowers, if any, were most heavily burdened by their debts? With regard to the first question, we found that the probability of borrowing from the student loan programs varied substantially with field of study, but not in a manner related to expected future earnings. Men were only slightly more likely to borrow than women. We therefore reject the hypothesis that demand factors played a major role in the determination of borrowing patterns and accept the notion that most borrowing was supply-constrained. Regarding repayment, we calculate that the fraction of Bachelors' level graduates who reported problems repaying their student loans was, overall, quite small, falling in the 7–8 percent range. Among both men and women, graduates with low current earnings and those in fields likely to have low lifetime earnings reported significantly greater problems with repayment. Holding other variables constant, women reported more difficulty in repayment than men. We found that the proportion repaid within two years of graduation varied systematically with current earnings, the amount owed, and field of study. We estimated separate models for men and women and found that the estimated coefficients of the two models were significantly different. In particular, women repaid their loans roughly at the same rate as men despite their lower earnings. Overall, it would seem that women borrowed only slightly less than men, repaid as quickly as men (despite lower earnings), but reported having significantly more difficulty in repayment. The NGS databases are a rich source of information regarding the experiences of Canadian post-secondary graduates in general, and student borrowing in particular. At the same time, there are many interesting and important questions that we have not been able to answer. First, we cannot determine how many potential students did not go to college or university because they feared the burden of the loans they would have to take out in order to attend. Given the increase in borrowing levels in the 1990s, this question is more pressing now than it was when our 1990 graduates began their post-secondary careers. A new Statistics Canada time series survey, called the Youth in Transition survey, will allow this question to be addressed in the future. Second, we were not able to analyze repayment problems using any objective measure of debt burden, relying instead on self-reported difficulties. Student loans are part of the increasing consumer debt loads that have led to record rates of personal bankruptcy in Canada and the lack of information on other debts in the NGS limits our analysis in this regard.