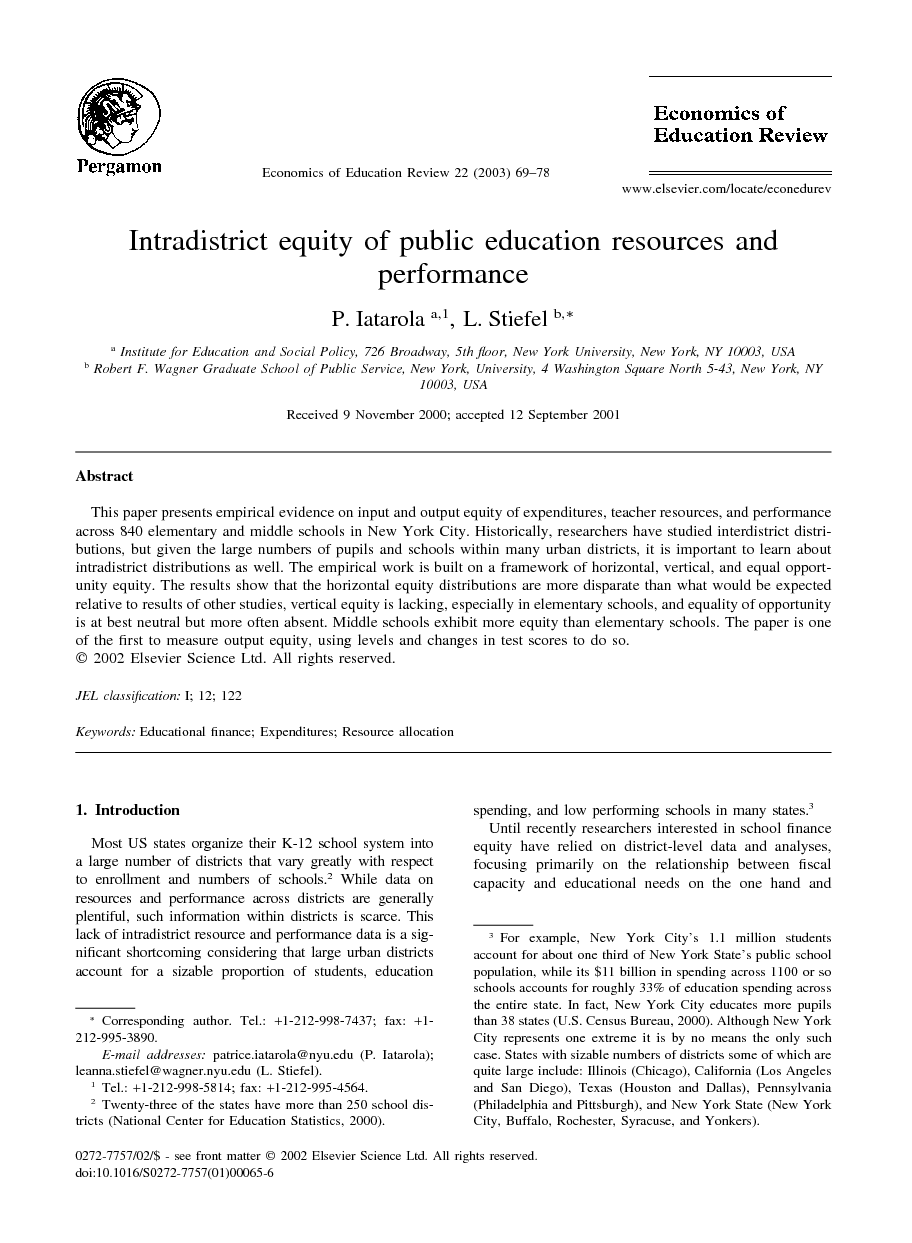 This paper presents empirical evidence on input and output equity of expenditures, teacher resources, and performance across 840 elementary and middle schools in New York City. Historically, researchers have studied interdistrict distributions, but given the large numbers of pupils and schools within many urban districts, it is important to learn about intradistrict distributions as well. The empirical work is built on a framework of horizontal, vertical, and equal opportunity equity. The results show that the horizontal equity distributions are more disparate than what would be expected relative to results of other studies, vertical equity is lacking, especially in elementary schools, and equality of opportunity is at best neutral but more often absent. Middle schools exhibit more equity than elementary schools. The paper is one of the first to measure output equity, using levels and changes in test scores to do so.

Most US states organize their K-12 school system into a large number of districts that vary greatly with respect to enrollment and numbers of schools.2 While data on resources and performance across districts are generally plentiful, such information within districts is scarce. This lack of intradistrict resource and performance data is a significant shortcoming considering that large urban districts account for a sizable proportion of students, education spending, and low performing schools in many states.3 Until recently researchers interested in school finance equity have relied on district-level data and analyses, focusing primarily on the relationship between fiscal capacity and educational needs on the one hand and resources on the other hand. They find that inter-district resource disparities within states decreased from the 1980s to the 1990s, but between-state differences in per-pupil resources remained large, and relative rankings of states changed little (Hussar and Sonnenberg, 2000, Parrish and Hikido, 1998 and Wyckoff, 1992). Rubenstein and Moser (2002) find that the distribution of resources is more equal in states with fewer districts relative to students and in states with higher proportions of revenues provided by state governments, while Evans, Murray and Schwab (1997) and Murray, Evans and Schwab (1998) show that court ordered education finance reforms have contributed to decreases in dispersions in the states where they took place by increasing spending in poor relative to less poor districts. With the advent of school-level resource data in the early 1990s, researchers have been able to analyze school-level resource distributions, often ignoring district boundaries and using all schools in a state. These school-level analyses reveal wide disparities (Betts, Reuben and Dannenberg, 2000, Burke, 1999, Hertert, 1996, Nakib, 1996, Owens and Maiden, 1999 and Schwartz, 1999). Researchers focusing on school-level data within large urban districts find significant disparities in resources and in some cases in the relationship between resources and poverty (Berne and Stiefel, 1994, Rubenstein, 1998 and Stiefel, Rubenstein and Berne, 1998). School finance equity researchers often focus exclusively on the input or resource side of the educational process, ignoring issues of output equity. A notable exception is the volume edited by Berne and Picus (1994), which consists of 12 papers all devoted to exploring ways to analyze output equity. In more recent years, the attention of state courts to the goal of adequacy in school finance has led economists such as Reschovsky and Imazeki (1998) and Duncombe and Yinger (2000) to estimate district cost functions that can be used to predict the amount of resources needed to produce adequate outcomes. Even with these adequacy studies, however, little has been documented on the distribution of outputs within large urban areas. This paper adds to our knowledge by analyzing the distribution of resources and performance across New York City elementary and middle schools.4 Particularly notable is our inclusion of performance measures along with traditional measures of spending and resources. The paper is organized as follows. In Section 2, we develop a conceptual framework for measuring intradistrict equity, while in Section 3 we describe the data and variables. In Section 4, we present empirical results and in Section 5 we conclude.

Spending per pupil is horizontally inequitable at both the elementary and middle school levels (coefficients of variation greater than 0.10), vertically inequitable at the elementary level (negative coefficient on percent free lunch), and inequitable for equal opportunity at the elementary level (negative coefficient on percent nonwhite and outer districts). Especially important are the vertical equity and equal opportunity results for elementary schools, results that are not replicated for middle schools. One of the most consistent findings in this study is the lack of vertical equity and equal opportunity in the distribution of teacher resources (teacher salary and certification). There appears to be a tradeoff between salary and/or certification of teachers and pupil/teacher ratios — schools with lower salaries and lower proportions of certification have more favorable pupil/teacher ratios. The likely explanation for this result is that the system allocates more teacher resources to schools with needier students but the union contract and regulations allow teachers with seniority the right to transfer to desirable schools, which makes it difficult for low performing schools to retain experienced and licensed teachers. In addition, a uniform pay scale makes it difficult to hire licensed or experienced teachers to work in poorly performing schools. Solutions to this problem could include a differential pay scale, which offers more to teachers working in schools with needier pupils, more amenities (e.g. secure parking) at less attractive schools, or renegotiation of union transfer policies. Difficulty in drawing conclusions regarding output equity stems from a lack of comparable analyses of outputs, although horizontal equity dispersions are high. Vertical equity and equal opportunity analyses show predictable inequities with schools that educate needier and nonwhite students scoring lower. This study provides a baseline for analyses of New York City and a comparative measure for other urban school systems. State education departments often seek to understand disparities in large urban districts. While data on school-level expenditures are publicly accessible in New York City, they are not in other districts. This leaves open the questions of what the disparities are in other districts and whether New York City is any different than other districts. Different or not, this study demonstrates that New York City has significant room for improvement in providing resources equitably as well as in achieving an equitable distribution of performance.