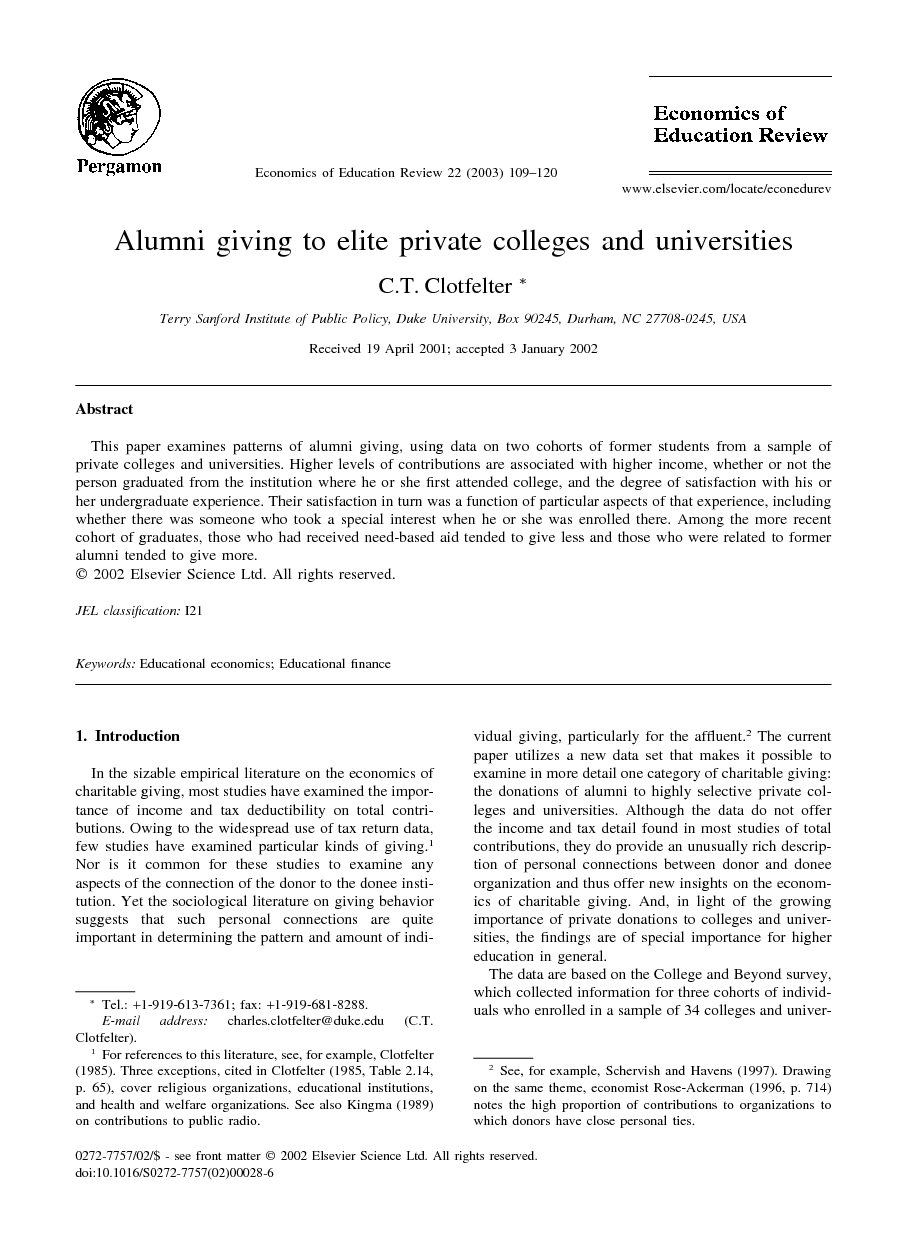 This paper examines patterns of alumni giving, using data on two cohorts of former students from a sample of private colleges and universities. Higher levels of contributions are associated with higher income, whether or not the person graduated from the institution where he or she first attended college, and the degree of satisfaction with his or her undergraduate experience. Their satisfaction in turn was a function of particular aspects of that experience, including whether there was someone who took a special interest when he or she was enrolled there. Among the more recent cohort of graduates, those who had received need-based aid tended to give less and those who were related to former alumni tended to give more.

In the sizable empirical literature on the economics of charitable giving, most studies have examined the importance of income and tax deductibility on total contributions. Owing to the widespread use of tax return data, few studies have examined particular kinds of giving.1 Nor is it common for these studies to examine any aspects of the connection of the donor to the donee institution. Yet the sociological literature on giving behavior suggests that such personal connections are quite important in determining the pattern and amount of individual giving, particularly for the affluent.2 The current paper utilizes a new data set that makes it possible to examine in more detail one category of charitable giving: the donations of alumni to highly selective private colleges and universities. Although the data do not offer the income and tax detail found in most studies of total contributions, they do provide an unusually rich description of personal connections between donor and donee organization and thus offer new insights on the economics of charitable giving. And, in light of the growing importance of private donations to colleges and universities, the findings are of special importance for higher education in general. The data are based on the College and Beyond survey, which collected information for three cohorts of individuals who enrolled in a sample of 34 colleges and universities in 1951, 1976, and 1989.3 These individuals were surveyed in 1995 and 1996 and were asked questions covering both their college experience and aspects of their current situation. For a subset of 14 of these institutions (all of them private and most of them quite selective), data were collected from the institution’s own administrative files on each person’s contributions for a number of years. Although not all of the individuals in this resulting sample graduated from these colleges and universities, the vast majority did, and so they are referred to throughout the paper as alumni. The resulting data set provides an excellent opportunity not only to supplement our knowledge about the factors that affect charitable giving but also to provide insight into what has become a significant source of revenue for private colleges and universities. In the 1999/2000 academic year, alumni contributed $4.0 billion to 566 private institutions, representing 8.6% of those institutions’ educational and general expenditures (Morgan & Kaplan, 2001, pp. 38–39). And, in light of the decade-long increases in stock prices and the success of university capital campaigns, despite recent reversals, the portion of total income from donations seems likely to grow. Indeed, donations assume a prominent role in Winston’s (1999) analysis of finance and market competition in higher education, providing a crucial source of funding for the substantial subsidies to students, particularly at elite institutions. Writes Winston, “The bottom line for any school is its access to the donative wealth that buys quality and position” (p. 30). The College and Beyond data make it possible to explore the connection between an individual’s experience with the institution—in this case, largely the experience of having been a student—and subsequent giving behavior. Analyzed in cross-section equations, the data set offers several possible measures of student experience to use in answering this question. It also affords an opportunity to examine two very pragmatic questions. One issue that has elicited increasing hand-wringing at private institutions is whether those who accumulate debt from student loans will be less likely to make contributions once they graduate, or whether those who receive financial aid will be more generous in the future, in recognition of the financial assistance they received as students. A related issue applies to the preference in admissions commonly accorded to the sons and daughters of alumni. Private institutions may be interested in knowing how these so-called legacies will behave once they become alumni. Although private institutions have, and continue to show, a preference for children of alumni, there is evidence that this and other non-meritocratic criteria may have become less important over time.4 If this is so, and if it implies a shift in the affluence of students attending private institutions, such changes in admissions policies could have long-term implications for alumni giving. Because it tracks donations over a number of years, the present data set also makes it possible to examine the effect of factors that may influence changes over time in giving, such as variation in the average tax price of giving caused by changes in the tax law and the performance of the stock market. A third possible temporal effect arises from the common practice among many institutions to place special emphasis on reunion years—those divisible by five. To provide a background for the present analysis, Section 2 of the paper reviews some of the existing literature regarding alumni giving. Section 3 describes the data set and the definitions of some of the variables used. Section 4 describes regression analysis of alumni satisfaction with their undergraduate college experiences and giving over a five-year period. Section 5 takes advantage of the annual data on gifts by individual alumni to explore the implications for timing of gifts and the effect of changes in stock prices. The concluding section summarizes the findings and notes questions that are not addressed in the paper.

Owing to the nature of the data it employs, this paper illuminates a critical element in charitable giving that is typically obscured in econometric studies of the subject: the personal experiences that often link donors to the organizations to which they donate. Although the data contain less income detail than most economic analyses of charitable giving, they offer unusually rich information describing each former student’s past association with his or her undergraduate college. It also provides a look at patterns of donations over time to a single organization, an aspect of giving behavior that has not previously been examined. Strikingly, though perhaps not surprisingly, the donations that alumni made to their alma maters were highly correlated to their expressed satisfaction with their own college experiences and other measures of satisfaction with the institution. Their satisfaction, in turn, was systematically and consistently related to several aspects of that experience, including whether the person had attended a public high school, whether the college had been the person’s first choice, and whether there was someone who took a special interest when he or she was enrolled there. The level of alumni donations was strongly associated with income and with whether or not the person graduated from the institution where he or she first attended college. Those who graduated from liberal arts colleges tended to give more than those who attended universities. Among the more recent cohort of graduates, those who had received need-based aid tended to give less and those who were related to former alumni tended to give more. Some of these findings may reflect the effect of otherwise unmeasured wealth. While it is surely not the most important reason for institutions to examine their admissions policies, these findings do highlight the connection between admissions and future donations and the possible long-term consequences of the increasingly meritocratic character of admissions at elite institutions.27 To the extent that affluent students are replaced with high-achieving ones, future prospects for alumni giving naturally will depend on the earning success of the latter vs the lost advantages of inherited wealth. If it turns out that such meritocratic tendencies do come at the expense of future contributions, this unintended consequence will be merely one more example of the maxim of the free lunch.