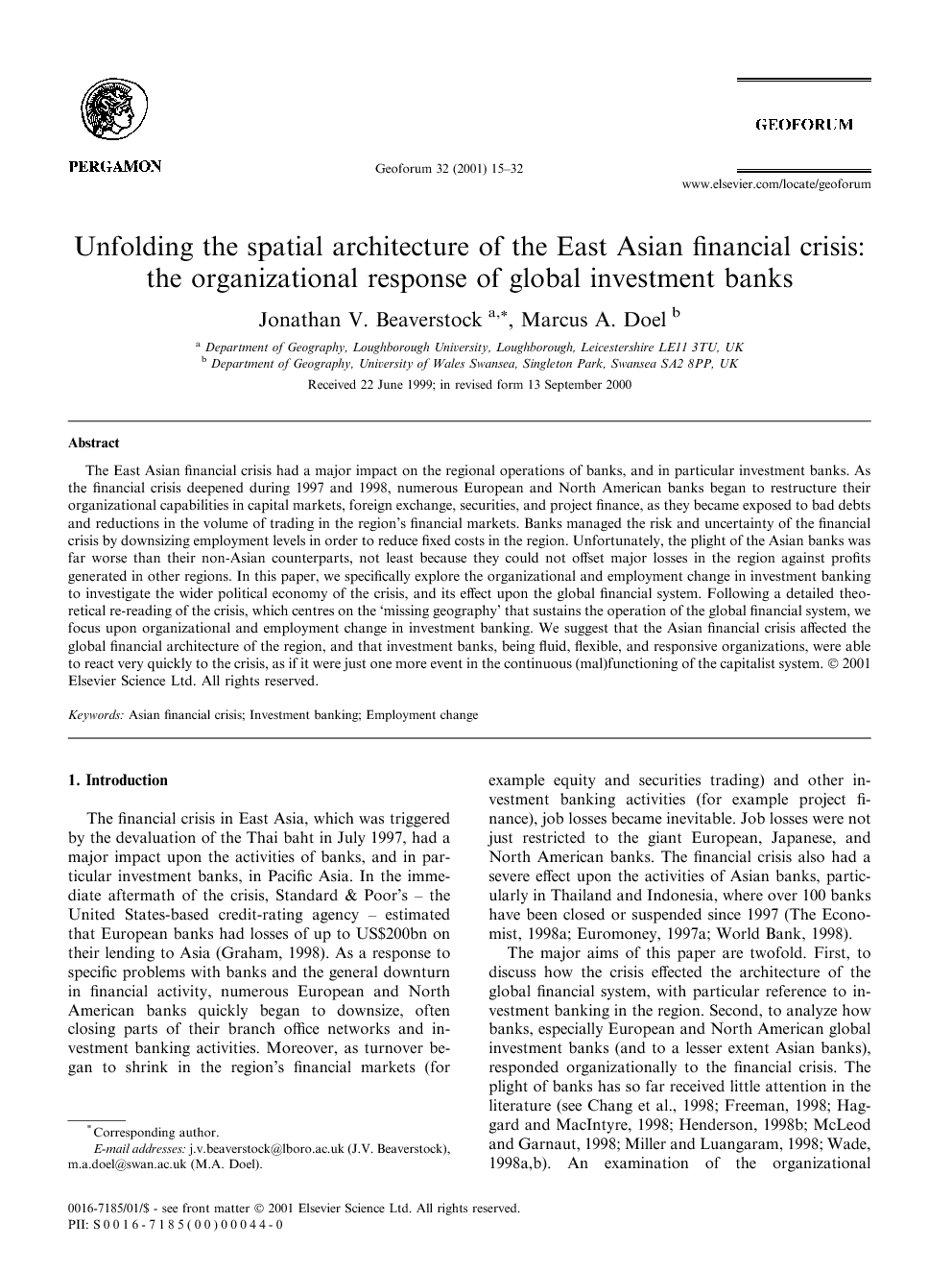 The East Asian financial crisis had a major impact on the regional operations of banks, and in particular investment banks. As the financial crisis deepened during 1997 and 1998, numerous European and North American banks began to restructure their organizational capabilities in capital markets, foreign exchange, securities, and project finance, as they became exposed to bad debts and reductions in the volume of trading in the region's financial markets. Banks managed the risk and uncertainty of the financial crisis by downsizing employment levels in order to reduce fixed costs in the region. Unfortunately, the plight of the Asian banks was far worse than their non-Asian counterparts, not least because they could not offset major losses in the region against profits generated in other regions. In this paper, we specifically explore the organizational and employment change in investment banking to investigate the wider political economy of the crisis, and its effect upon the global financial system. Following a detailed theoretical re-reading of the crisis, which centres on the `missing geography' that sustains the operation of the global financial system, we focus upon organizational and employment change in investment banking. We suggest that the Asian financial crisis affected the global financial architecture of the region, and that investment banks, being fluid, flexible, and responsive organizations, were able to react very quickly to the crisis, as if it were just one more event in the continuous (mal)functioning of the capitalist system.

The financial crisis in East Asia, which was triggered by the devaluation of the Thai baht in July 1997, had a major impact upon the activities of banks, and in particular investment banks, in Pacific Asia. In the immediate aftermath of the crisis, Standard & Poor's – the United States-based credit-rating agency – estimated that European banks had losses of up to US$200bn on their lending to Asia (Graham, 1998). As a response to specific problems with banks and the general downturn in financial activity, numerous European and North American banks quickly began to downsize, often closing parts of their branch office networks and investment banking activities. Moreover, as turnover began to shrink in the region's financial markets (for example equity and securities trading) and other investment banking activities (for example project finance), job losses became inevitable. Job losses were not just restricted to the giant European, Japanese, and North American banks. The financial crisis also had a severe effect upon the activities of Asian banks, particularly in Thailand and Indonesia, where over 100 banks have been closed or suspended since 1997 (The Economist, 1998a; Euromoney, 1997a; World Bank, 1998). The major aims of this paper are twofold. First, to discuss how the crisis effected the architecture of the global financial system, with particular reference to investment banking in the region. Second, to analyze how banks, especially European and North American global investment banks (and to a lesser extent Asian banks), responded organizationally to the financial crisis. The plight of banks has so far received little attention in the literature (see Chang et al., 1998; Freeman, 1998, Haggard and MacIntyre, 1998, Henderson, 1998b, McLeod and Garnaut, 1998, Miller and Luangaram, 1998, Wade, 1998a and Wade, 1998b). An examination of the organizational responses of European and North American banks to the crisis provides an opportunity to investigate how transnational banks employ different corporate strategies to check major destablilizing events in the international finance system. Accordingly, the paper is organised into three substantive parts. First, we offer a new theoretical appraisal of the East Asian financial crisis, emphasising the ways in which the political economy of the crisis unfolded through a particular spatialization of the financial architecture of the world economy. Second, we discuss the effects of the crisis on both the global financial system and international banking within the region. Third, we analyze how European, North American, and Asian investment banks managed the ensuing turmoil in East Asian markets, through office closure and redundancy programmes. In addition, we also consider the plight of Asian banks, and analyze the collapse of the Hong Kong-based Peregrine Investment Bank. Finally, we conclude the paper by considering the fallout of the Asian crisis for Asian, European, and North American investment banks, and the global financial system itself.

The remit of this paper has been to explore how European and North American investment banks, and to a lesser extent Asian banks, have restructured staÅng levels in response to the East Asian Ænancial crisis. Three major conclusions stand out. First, many Asian and non-Asian banks were highly exposed to the crisis- hit region, but particularly to Thailand and Indonesia. With respect to non-Asian banks in East Asia, many European and US institutions were able to oset their East Asian losses against gains in other geographical markets (see The Banker, 1998b). However, banks like HSBC, Standard Chartered, J.P. Morgan, and National Westminster Bank all downsized both business activities and employment in order to rationalize cost structures and protect proÆtability (Table 3). Second, although both Asian and non-Asian banks have been damaged by the crisis, Asian banks have been disproportionately eected in terms of debt exposure, losses, closures, re- dundancies, and government intervention. Many Asian banks could not oset losses or raise revenue in other geographical markets because they were so deeply en- trenched in East Asia. They were essentially regional and not global banks. The bankruptcy of Peregrine In- vestment Bank showed quite graphically how a bank had over-reached itself throughout Asia. It had devel- oped large debt exposure in Thailand and Indonesia, and sought to raise more revenue through a risky ven- ture with the Swiss-based Zurich Centre Investment Group, an act of desperation which literally broke the bank. Third, it was the Indonesian and Thai banks that had the most to lose in the region, especially through debt exposure, and shaky organizational and regulatory control in their respective banking systems. Further- more, the exposure of Japanese banks in Asia, coupled with the on-going domestic crisis in Japan, quickly re- verberated throughout the Ænancial centres of Londonand New York City, as a signiÆcant number of Japanese banks ceased their operations in order to consolidate activities back in Japan. One Ænal conclusion can be advanced in respect to how global investment banks have managed the com- plexity of employment change under conditions of crisis. It can be argued that for many global investment banks exposed to the crisis, they treated it as yet another global `event,' which required immediate corporate restructur- ing of their operations to reduce losses and maintain proÆtability. Throughout the crisis, for all of the major non-Asian banks, it was more-or-less business as usual. Moreover, as these adjustments were being made in the Asian region, banks were faced with the Russian and Brazilian crises, both of which broke in early 1998. Again, many of these banks restructured and downsized staÅng accordingly (Table 3). Nevertheless, most Eu- ropean and North American investment banks have by now recovered from the succession of crises that were inØicted upon the world economy during 1997, 1998, and 1999: on the balance sheet anyway. More impor- tantly, they are now in a much more powerful position in East Asia than they were before: not least because of the strength of the European and North American economies. They have: lean cost structures; begun to consider buying stakes in Asian banks; and are seeing o their major competitors in the region the Japanese banks. Moreover, it is predicted that the very big play- ers, with `deep pockets' and `patience' ± banks such as Merrill Lynch, Citibank, Deutsche Bank, and ABN Amro ± will emerge as the winners, as the region turns around in the next Æve years or so (Boland, 1999, p. VI). Finally, we would like to argue that there are two major geographical arguments arising out of the crisis with respect to the global Ænancial system. The Ærst is that global investment banks became very important actors or intermediaries in the spatial architecture of the region's Ænancial system. The investment banks were theprincipal actors that sustained the region's Ænancial system through their networks of branch oÅces, their interaction with Ænancial markets within East Asia, and their networks of clientele, which included both the private sector and the state. Their role as intermediaries in the regional Ænancial system was invaluable during the crisis, as many `local' Asian banks, including the Japanese, began to suer ± and in many cases collapse ± insofar as they were exposed to mounting debt exposure. The second major geographical argument to arise from this study is that the scale and diversiÆcation of global investment banks into other geographical markets meant that they were able to manage the Ænancial crisis more eectively than their East Asian counterparts. As East Asian banks were eectively tied into their own regional Ænancial systems, they were the institutions that lost most from the crisis. They were the least geo- graphically dispersed and diversiÆed. As for Japanese banks, they are now far too concerned with events in Japan, their own forthcoming `Big-Bang,' and the scramble with US banks for strategic alliances in Tokyo (Rowley, 1998).