عنوان انگلیسی
Do investment banks compete in IPOs?: the advent of the “7% plus contract”
دانلود فوری مقاله + سفارش ترجمه 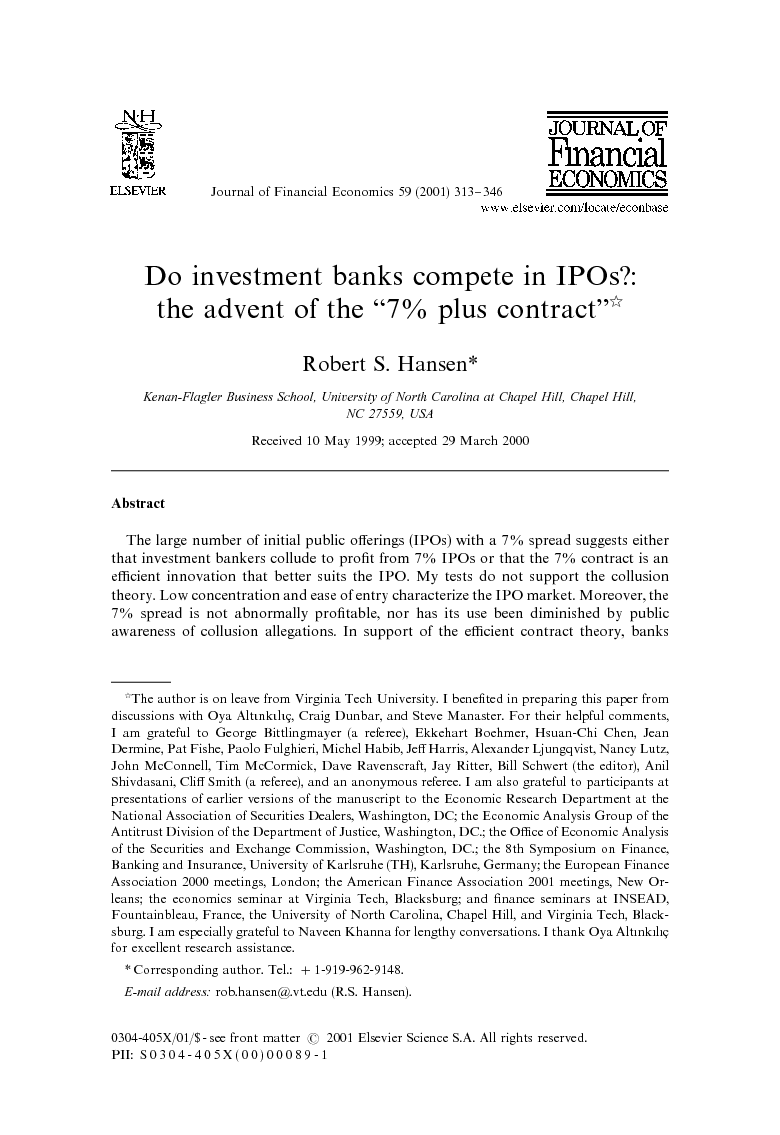 The large number of initial public offerings (IPOs) with a 7% spread suggests either that investment bankers collude to profit from 7% IPOs or that the 7% contract is an efficient innovation that better suits the IPO. My tests do not support the collusion theory. Low concentration and ease of entry characterize the IPO market. Moreover, the 7% spread is not abnormally profitable, nor has its use been diminished by public awareness of collusion allegations. In support of the efficient contract theory, banks compete in pricing 7% IPOs on the basis of reputation, placement service, and underpricing.

This paper examines two theories for the widespread use of a 7% spread in IPOs. The cartel theory is that there is collusion, which could be explicit or implicit, to earn monopoly pro " t from the 7% spread. The e $ cient contract theory is that the 7% contract is a competitive innovation of the " rm commit- ment contract that best suits the IPO. The results of this study show that the IPO market is unconcentrated, entry into the market has been strong, and 7% does not contain abnormal pro " ts relative to other IPOs. Moreover, the 7% contract has persisted despite the Department of Justice investigation of collusion allegations, arguing strongly against collusion. There is no evidence of monopoly pro " t in underpricing or unusual charges in subsequent SEOs, nor does a " xed spread contract appear to be used in the closely related SEO market. The results are thus consistent with competition among investment banks in the pricing of 7% IPOs on the basis of their reputations, placement service, and underpricing to complement the 7% spread. While I cannot rule out that a persistent collusion exists that cannot be detected by the above tests, the results from the well-known tests for collusion, as well as from the newer tests, argue against collusion.