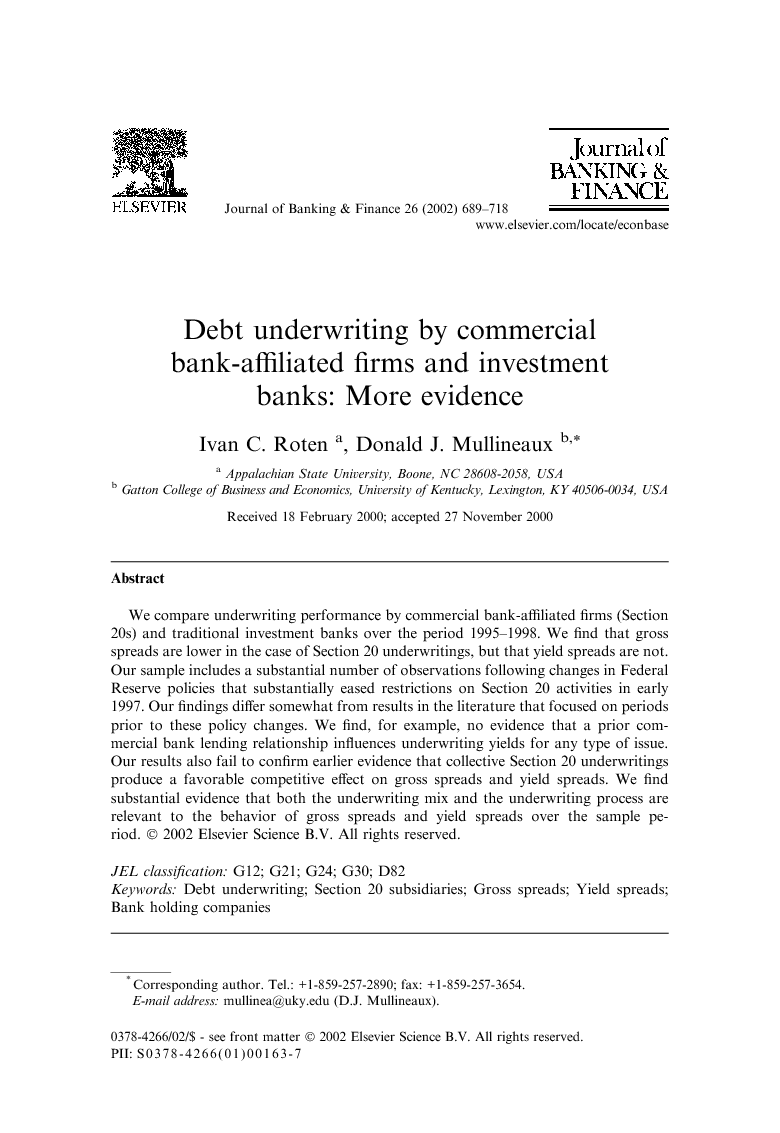 Commercial banking organizations have been heavily engaged in underwriting corporate securities issues in the 1990s, despite the apparent prohibition on such activities by the Glass–Steagall Act of 1933. Bank holding companies gained entry into the underwriting business when the Federal Reserve modified its interpretation of Section 20 of the Act which prohibits banks from being affiliated with any organization that is “engaged principally” in underwriting or dealing in securities. In 1986, the Fed permitted securities subsidiaries of bank holding companies to underwrite and deal in certain bank ineligible securities, provided that revenues from such underwritings constituted less than 5% of the subsidiary's gross revenue.1 The holding company subsidiaries that engage in such activities are commonly referred to as “Section 20 subsidiaries”. In the interim, the Federal Reserve has enlarged the set of allowable underwritings and raised the allowable revenue limit. In 1989, the Fed permitted corporate bond underwriting and, in 1990, issues of equity securities. In January 1989, J.P. Morgan Securities underwrote the first public corporate bond issue by a commercial banking organization since the Glass–Steagall Act. In 1989, the Fed raised the revenue ceiling on ineligible underwritings to 10%. Effective in early 1997, the Fed again increased the limit to 25% and relaxed a set of restrictions (“firewalls”) on interactions between a Section 20 subsidiary and an affiliated bank. The Board eliminated restrictions on a bank engaging in marketing activities on behalf of an affiliated Section 20, loosened restrictions on interlocks between directors, officers and employees of a Section 20 subsidiary and an affiliated bank (which had been strictly prohibited), and eased constraints on the purchase and sale of financial assets between a Section 20 subsidiary and an affiliated bank. The amount of commercial bank-related underwritings has increased substantially in the late 1990s. During 1998, for example, three of the top 10 underwriters of US stocks and bonds by dollar volume were affiliated with bank holding companies (Salomon Smith Barney, JP Morgan, and Chase). As of June 1999, 51 Section 20 subsidiaries were owned by bank holding companies. Underwriting activities by commercial bank-related organizations are likely to increase further since the formal repeal of the Glass–Steagall Act by the Gramm–Leach–Bliley Financial Modernization Act of 1999. The finance literature has examined the performance of commercial bank-related underwritings both before and after Glass–Steagall. A consensus has formed that the legal restrictions placed on underwritings by commercial banking organizations in 1933 were probably misguided (see Kroszner and Rajan, 1997 and Benston, 1990). There are only a few papers examining the performance of Section 20 debt underwritings in the 1990s. While these studies provide useful information, the research largely is limited to a period when commercial banks were relatively new entrants into debt underwriting. They do not address some major changes in underwriting processes and the mix of public debt issues in the 1990s, in particular the growth in shelf registration and in the medium-term note (MTN) market. In this paper, we first examine whether the results observed for the relatively early period of commercial bank entry into debt underwriting continue to hold after the Federal Reserve eased restrictions on these activities and Section 20 firms “matured” as debt underwriters. For this analysis, we estimate models that are quite similar to those estimated by Gande et al., 1997 and Gande et al., 1999. We next estimate models with more extensive specifications to determine whether shifting trends in capital markets affect either the performance of underwriters in general over the period or the conclusions drawn from the more restricted model estimations. We find that Section 20 subsidiaries underwrite debt with significantly lower gross spreads than investment banks over our sample period, which includes a number of observations following changes in Federal Reserve policies that eased restrictions on Section 20 activities in early 1997. Yield spreads do not differ by underwriter type, however. Our findings differ somewhat from earlier results in the literature. We find that the existence of a commercial bank lending relationship does not influence underwriting yields over our sample period, even for non-investment grade issues. Gande et al. (1997) found contrary results over an earlier sample period. Our results also fail to support the hypothesis of a favorable competitive effect on gross spreads and yield spreads stemming from collective Section 20 activity. The effects identified by Gande et al. (1997) do not continue into our sample period, as the authors speculated might prove to be the case.

We have examined the fees (gross spreads) and yields associated with debt underwritings by commercial bank-affiliated firms and ‘‘traditional’’ investment banks over the period 1995–1998. Both finance theory and the results of some prior research suggest that underwritings by Section 20 firms might involve lower fees and/or yields for issuing firms. The factors accounting for this are the prospect that, as relatively new entrants into the business, Section 20 under- writers might compete for business by offering ‘‘bargain’’ fees and/or yields, the possibility that commercial bank-affiliated firms might have access to idiosyn- cratic information not available to traditional investment banks, and the po- tential for Section 20 firms to exploit distribution channels already established by other affiliates in its holding company. Prior to Q1, 1997, the Federal Reserve attempted to constrain information flows and cross-marketing activities be- tween Section 20 firms and their affiliated banks through the use of firewalls. We find only limited evidence for the hypothesis that commercial bank- affiliated underwriters perform differently from investment banks over the sample period. Section 20 affiliates do underwrite debt at significantly lower gross spreads, perhaps reflecting some information advantages or a pricing strategy designed to build market share. There are no significant differences in yield spreads between the two types of underwriters, however, even in the case of non-investment grade underwritings. The latter result differs from Gande et al. (1997) and suggests that access to ‘‘private’’ information may not be the primary rationale for the differences in gross spread we observed. If Section 20 underwriters possess superior information sets to investment banks, we would expect yield spreads to be different along with gross spread. In general, our results suggest that commercial bank affiliates underwrite debt in ways quite similar to investment banks over our sample period and that increases in Section 20 market share no longer appear to be yielding the competitive benefits ob- served by Gande et al. (1999) during an earlier period.Our research did uncover several other findings of interest. First, the process or model that drives junk bond underwriting is substantially different from investment grade underwriting, regardless of underwriter type. Second, MTNs are underwritten with lower gross spreads and lower yield spreads than tra- ditional debt instruments. Contrary to the result of Crabbe and Turner (1995), MTNs are not perfect substitutes for other types of debt. 25 Finally, the size of the file is a more significant factor than issue size as a determination of gross spreads. This suggests that scale economies may be more relevant in the reg- istration phase than in the distribution phase of underwriting.