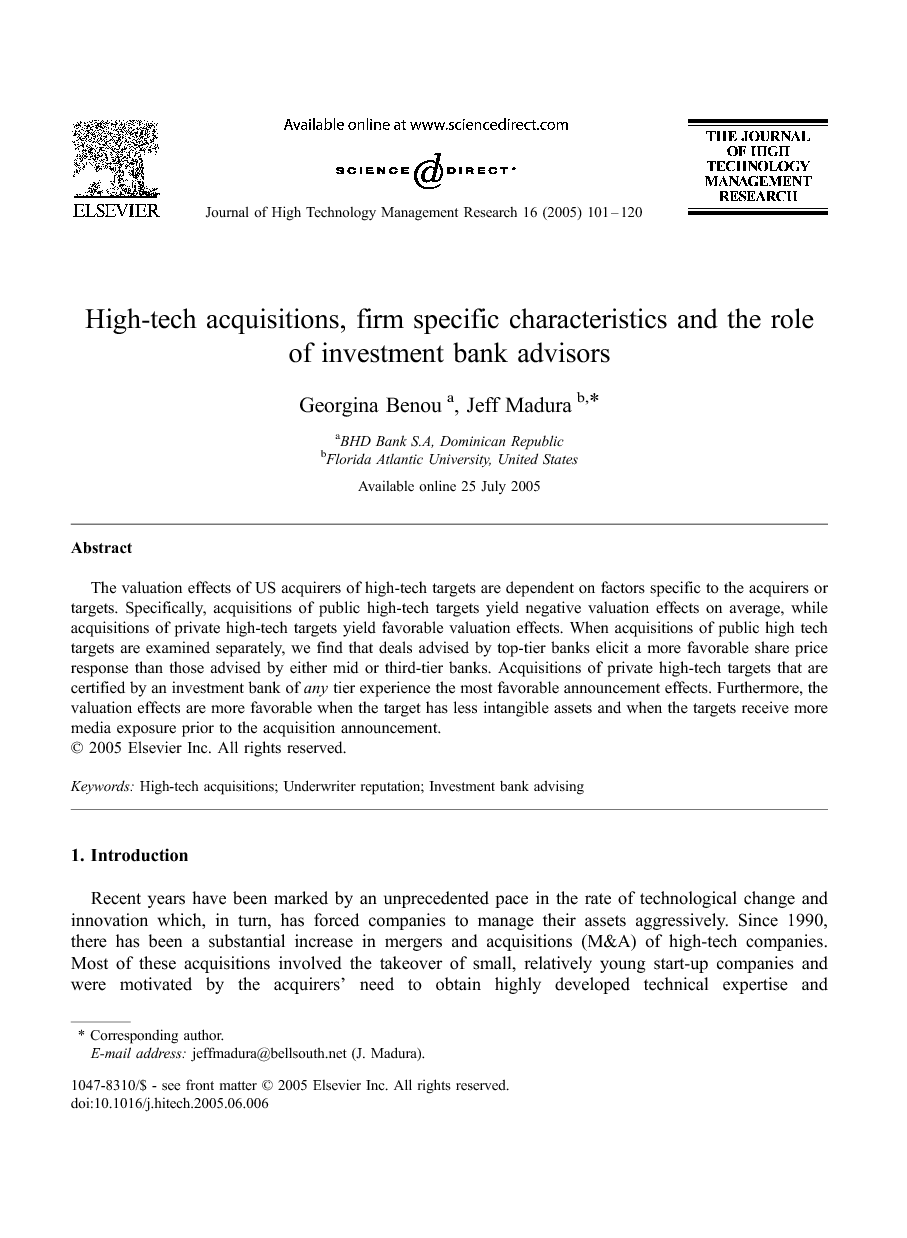 Recent years have been marked by an unprecedented pace in the rate of technological change and innovation which, in turn, has forced companies to manage their assets aggressively. Since 1990, there has been a substantial increase in mergers and acquisitions (M&A) of high-tech companies. Most of these acquisitions involved the takeover of small, relatively young start-up companies and were motivated by the acquirers' need to obtain highly developed technical expertise and capabilities. As was stated by Rauft and Lord (2000): “Acquiring firms may not have the ability to develop these valuable knowledge-based resources internally or, alternatively, internal development may take too long or be too costly”. Kohers and Kohers (2000) state: “The high-growth nature of technology-based industries distinguishes them from other types of industries. In addition to their high-growth potential, however, another distinctive feature of high-tech industries is the inherent uncertainty associated with companies whose values rely on future outcomes or developments in unproven, uncharted fields” [p. 40]. In fact, many “pure” technology stocks are young companies, underfunded and without prospects for generating any cash flows in the near future. Nevertheless, despite the inherent uncertainty of high-tech industries, investors seemed to disregard most equity fundamentals when valuing technology stocks, especially during the market upturn in the late 1990s. As a result, even though high-tech stocks were in general extremely volatile, many of them were trading at remarkable premiums. The exploding rate of growth of M&A activity in high-tech industries can be partly attributed to those overly optimistic valuations (see Puranam, 2001). Many of these acquisitions were also motivated by the acquirer's need to obtain critical technologies and expertise in order to quickly enhance their own technological competence. According to the McKinsey Quarterly Report (2002) (Frick & Torres, 2002), “transactions and consolidations can often fill holes in a product line, open new markets, and create new capabilities in less time than it would take to build businesses internally. Such moves may be prerequisites to achieving a dominant position—the best assurance for survival”. The burst of the tech bubble has lead to lower overall valuations, making more targets affordable. Given the volatile environment in which high-tech stocks operate, as well as the recent developments in the M&A marketplace, the use of investment bank advisors in such deals should be especially valuable. Specifically, if top-tier investment banks have valuable experience and specialized insight to offer, then high-tech companies using them as advisors in their M&A deals should be able to create shareholder value. Although many acquirers still choose to identify a potential target on their own, investment banks may be able to conduct the search for acquisition candidates more efficiently than the firm itself. Superior expertise in the market for acquisitions and lower search costs due to economies of scale are two of the most common cited reasons. Furthermore, an experienced investment bank, whether representing the bidder or target, should be able to negotiate the offer at more favorable terms, increasing shareholder gains. The investment bank's role in mergers and acquisitions is controversial, partly because the contingent fee payments to the investment bank contracts may force the investment bank to focus only on completing the deal. McLaughlin, 1990 and McLaughlin, 1992 examined the nature of investment-banking contracts in tender offers. He indicated that most fee contracts are substantially contingent on offer outcome, offering an average of $7.96 million for a completed acquisition but only $1.56 million for no transaction. He argued that contingent fees, as well as other provisions in the contracts, give investment banks substantial incentives to complete a transaction and create potential conflicts of interest. Studies have found that targets enjoy most of the expected merger and acquisition gains, while acquiring firms experience zero or even negative announcement effects. Acquirers are sometimes motivated to acquire for reasons that maximize managerial benefits rather than firm value (see Amihud et al., 1983, Lloyd et al., 1987, Malatesta, 1983 and Morck et al., 1990). In addition, managers may be overly optimistic about the value of their targets, act on the presumption that their valuations are correct and fail to recognize that there are really no gains in takeovers (Roll, 1986). Despite the volume, magnitude and importance of high-tech acquisitions, research in the finance literature has been limited. Kohers and Kohers (2000) examined the value creation potential of high-tech mergers and found that upon announcement acquirers of high-tech targets experience significantly positive abnormal returns (ARs) regardless of whether the merger is financed with cash or stock. However, in a following study (2001) they conclude that the high expectations regarding the future merits of these investments do not seem to be justified. Over a 3-year period following the merger, the bidders significantly underperform both industry-matched and size/book to market matched control portfolios. That lead them to conclude that the market tends to exhibit excessive enthusiasm toward the expected benefits of certain high-tech mergers but many of these benefits do not materialize. Their results are further supported by a recent PriceWaterhouseCoopers' report, which estimates that approximately 80% of the technology acquisitions during the time period of 1994–1997 have failed to achieve their objectives. As Puranam (2001) stated: “Simply acquiring a technologically sophisticated start-up does not automatically guarantee that a firm will attain proficiency at the new technology and will be able to use it as a platform for future product development. In fact as many as 60% of such acquisitions suffer from severe problems in the post-merger integration stage”. Our study is intended to build on the research on high-tech acquisitions, by addressing tech-specific factors that can explain the variation in valuation effects. We examine how the use of an investment bank as an advisor is associated with the valuation effects of high-tech acquisitions. We also test the impact of a target's level of R&D expenditures and media exposure on valuation effects of acquisitions. These two factors do not normally receive attention in acquisitions research, but play a bigger role for high-tech acquisitions. We also consider the impact of other variables that have been used in previous studies on acquisitions, not only as a control, but also to determine whether their impact is altered when applied to high-tech acquisitions.

US acquirers of high-tech targets experience positive but insignificant announcement period CARs averaging 0.35% for the 2-day event period ( 1, 0) and 0.40% for the (0, +1) 2-day period. Furthermore, over the post-event window (1, +10) CARs become negative and statistically significant at the 0.1% level. The results are dependent on whether the acquisition involves a private versus a public high-tech target. Specifically, investors regard acquisitions of publicly traded high-tech companies as value-decreasing events, while acquisitions of similar privately-held companies yield significant gains and are considered value-enhancing transactions. We also find that acquirers of private companies appear to favor stock-only deals. One possible explanation may be that in cases where there is high uncertainty about the target firm’s value, the bidder may choose to offer stock, forcing target shareholders to share part of the risk if the bidder ends up overpaying for the target ( Hansen, 1987 ). The cross-sectional analysis results on the sample of all high-tech deals indicate that acquisitions using an investment bank of any tier are viewed more favorably than similar acquisitions with no investment bank. Overall, the findings on the role of investment bank advisors appear to largely depend on whether the acquisition involves a public versus a privately-held target. Separate cross- sectional regressions on the sample of public high-tech target acquisitions show that deals advised by top-tier banks perform better than those advised by either mid- or third-tier banks. These results suggest that top-tier investment banks may provide expertise in valuing high-tech assets, and serve as a valuable endorsement of a deal. The cross-sectional results on the sample of privately-held high-techtarget acquisitions indicate that the tier has no impact on valuation effects, but acquisitions that are certified by an investment bank of any tier enjoy higher announcement period ARs than other acquisitions. Furthermore, despite the acquirer’s preference for stock-financed acquisitions, announce- ment period effects for bidder shareholders are smaller in stock and mixed offers than in cash offers. The results support the expected inverse relationship between R&D and valuation effects of the bidder. They also support the expected positive relationship between the target’s MEDIA exposure prior to the acquisition announcement and the valuation effects of the bidder. It appears that the more media attention the tech targets receive prior to the acquisition, the more enthusiastic bidder shareholders become about the prospects of these companies and the more favorably they react to news about their acquisition.