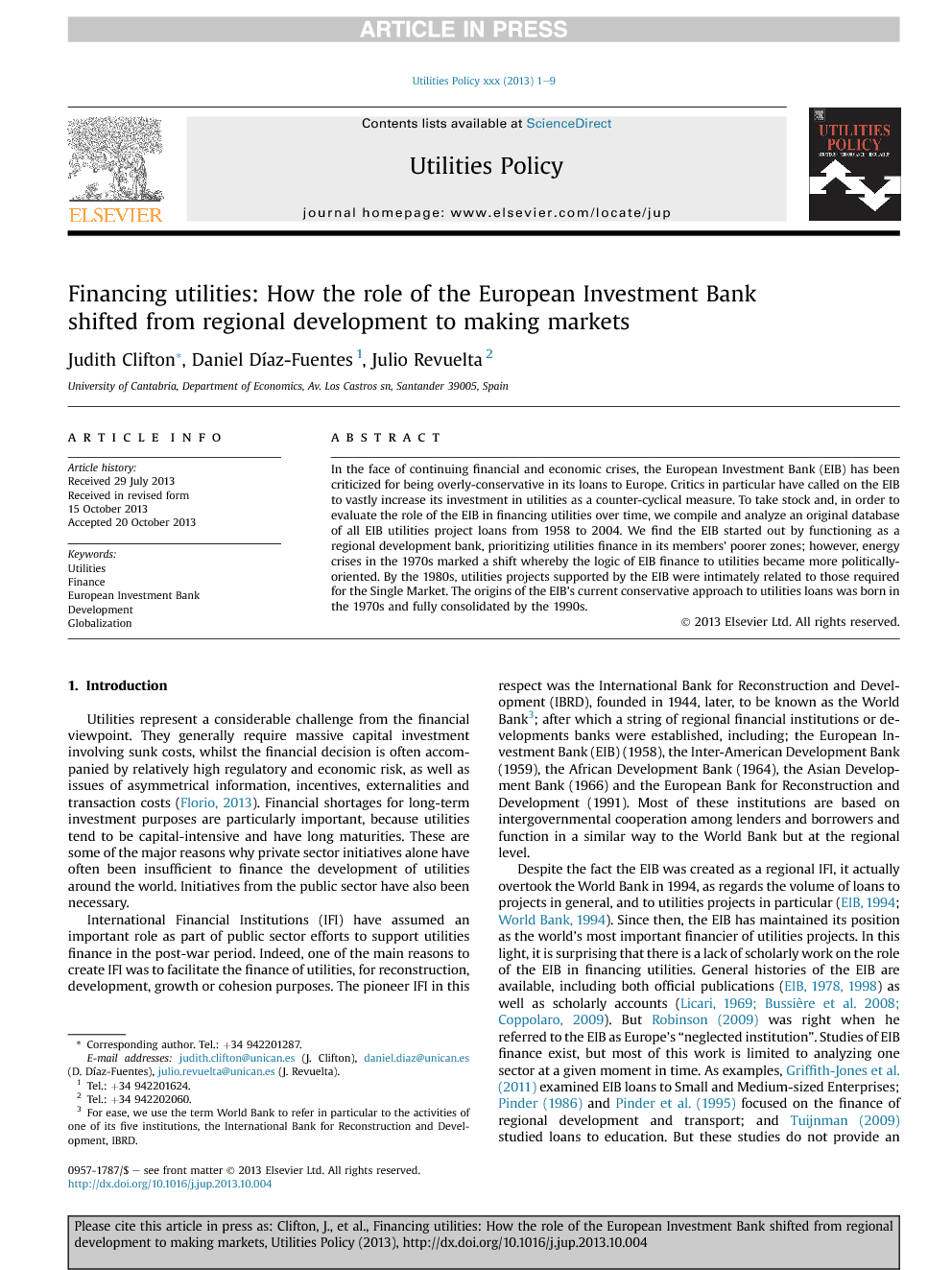 In the face of continuing financial and economic crises, the European Investment Bank (EIB) has been criticized for being overly-conservative in its loans to Europe. Critics in particular have called on the EIB to vastly increase its investment in utilities as a counter-cyclical measure. To take stock and, in order to evaluate the role of the EIB in financing utilities over time, we compile and analyze an original database of all EIB utilities project loans from 1958 to 2004. We find the EIB started out by functioning as a regional development bank, prioritizing utilities finance in its members' poorer zones; however, energy crises in the 1970s marked a shift whereby the logic of EIB finance to utilities became more politically-oriented. By the 1980s, utilities projects supported by the EIB were intimately related to those required for the Single Market. The origins of the EIB's current conservative approach to utilities loans was born in the 1970s and fully consolidated by the 1990s.

Utilities exhibit special characteristics making their fi nance complex. Huge capital requirements, sunk costs and long matu- rities have meant private involvement has not always been suf fi - cient when fi nancing utilities development. Public involvement has also been important. IFI played an important role in fi nancing utilities from the post-war period. We observed how much more is known about the contribution of both World Bank and the IMF than the EIB as regards fi nancing utility projects. This article shed new light on the role of the EIB in fi nancing utilities over nearly half a century. In the context of the ongoing crisis, the EIB has been criticized for not doing enough to support ailing European economies on their roadto recovery due to what is perceived as an overly conservative approach to lending ( Grif fi th-Jones and Tyson, 2012; Grif fi th-Jones et al., 2012 ). After assembling and processing all data on EIB lending over time until 2004, we selected all fi nance going to utilities projects in Europe. We then analyzed the data, using an analytical framework based on the work of Millward (2005) and Hausman et al. (2008) , and anticipated wewould encounterdifferent phases in the logic of EIB fi nance. Firstly, an initial period where lending corresponded to a “ golden age ” where the role of IFI was deemed essential due to private capital scarcity, dollar shortages and so on. And secondly, from the 1970s, a new phase, consolidated during the 1980s and 1990s, of private capital excess as a result of fi nancial globalization, wherein the continued relevance of IFI would be questioned. We found that EIB lending can be explained generally, using these two phases, though there were some important nuances. There were three clear stages in EIB lending practice. Firstly, from 1958 to 1972, EIB fi nance promoted, above all, lending to the poorestregionsamong its members, in linewith objectiveone of its Statutes. It functioned as a developing bank for Europe. The year 1973 brought about a rupture in EIB lending practice: oil crises and the collapse of the international monetary system led to a scenario whereby EIB fi nance became closelyaligned with the Commission ’ s and Member States ’ interest in achieving energy independence whilst fi nance was used as a sweetener for enlargement. From 1973 to 1985, EIB fi nance responded to these two key policy objectives. From 1986, a new pattern in EIB fi nance emerged. As fi nancial globalization and utilities deregulation spread around the world, and excessprivatecapital helped fuel questionsabout the relevance of IFI, the EIB looked for a new role inside Europe. As policy-makers promoted deeper integration and the consolidation of the Single Market, whilst privatization programmes grew, EIB fi nance boomed, fi rstly, towards utilities sectors key to the TENS (road and rail transport) and, secondly, to those sectors being liberalized and/or privatized (telecommunications, energy and water, to a lesser extent). In sum, over nearly half a decade, EIB fi nance shifted from prioritizing utilities for regional development, to promoting an enhanced market presence in the utilities sector. Our analysis of the changing role of EIB loans to utilities helps explain the current predicament facing the EIB. Contemporaryscholars criticize the EIB for an overly-conservative approach to lending in the crisis and for not taking risks in the name of the social interest ( Grif fi th-Jones et al. 2012; Grif fi th-Jones and Tyson, 2013; Kaul, 2012 ). Many scholars argue that what is required in times of austerity is greater fi nance of infrastructure in an attempt to spark growth. The EIB sits in a privileged position to do so, due to the favorable conditions it enjoys to offer fi nance. In the 1950s and 1960s EIB fi nance prioritized regional development. Back once more to the age of crisis and austerity, the EIB should look to its founding Statutes, written after war and crisis, and fi nd the courage to fi nance regional development once more.