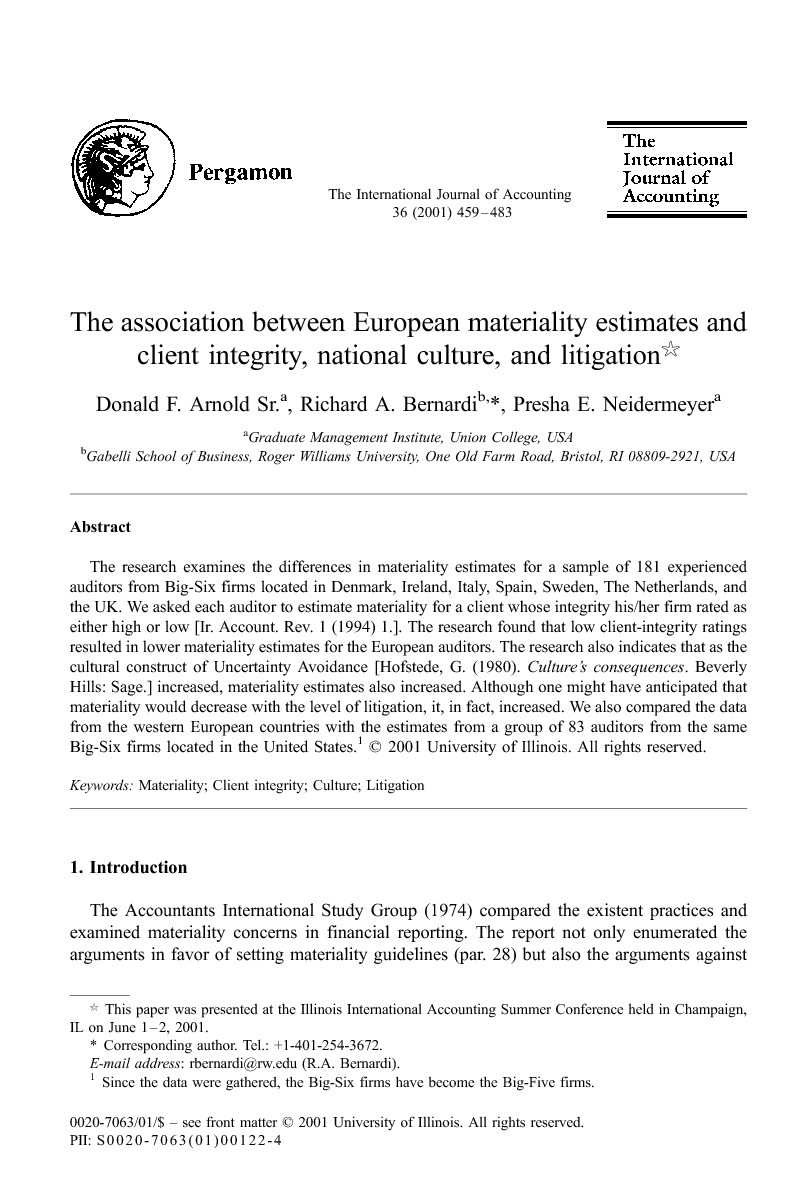 The research examines the differences in materiality estimates for a sample of 181 experienced auditors from Big-Six firms located in Denmark, Ireland, Italy, Spain, Sweden, The Netherlands, and the UK. We asked each auditor to estimate materiality for a client whose integrity his/her firm rated as either high or low [Ir. Account. Rev. 1 (1994) 1.]. The research found that low client-integrity ratings resulted in lower materiality estimates for the European auditors. The research also indicates that as the cultural construct of Uncertainty Avoidance [Hofstede, G. (1980). Culture's consequences. Beverly Hills: Sage.] increased, materiality estimates also increased. Although one might have anticipated that materiality would decrease with the level of litigation, it, in fact, increased. We also compared the data from the western European countries with the estimates from a group of 83 auditors from the same Big-Six firms located in the United States. 1

The Accountants International Study Group (1974) compared the existent practices and examined materiality concerns in financial reporting. The report not only enumerated the arguments in favor of setting materiality guidelines (par. 28) but also the arguments against the prescription of guidelines on materiality (par. 29). The International Accounting Standards Committee (IASC) endeavored to create a set of standards that will lead to “the improvement and harmonization of regulations, accounting standards and procedures relating to the presentation of financial statements” (IASC, 1999a). Another possibility is mutual recognition. Unlike harmonization, mutual recognition does not require a country to change its rules. Rather, each country agrees to accept the accounting rules and regulations of other countries. However, before a country adopts a policy of mutual recognition, it should be confident that, even though specific audit procedures may vary, the level of audit precision is constant between the two countries. Consequently, culture Hofstede, 1980 and Hofstede, 1991 might influence an auditor's decision-making process and thus influence materiality estimates. To date, there is no empirical evidence to support the premise that implementing international standards provides comparable statements of equal precision. This research examines the effects of client-integrity ratings Bernardi & Arnold, 1994 and Estes & Reames, 1988, culture Hofstede, 1980 and Hofstede, 1991, and the level of litigation within a country (Wingate, 1997) on materiality estimates from an international perspective. The research also compares the European materiality estimates with the estimates from a group of US auditors (Bernardi & Arnold, 1994). The European sample includes 181 auditors (25 partners, 67 senior managers, and 89 managers) with Big-Six auditing firms from Denmark, Ireland, Italy, The Netherlands, Spain, Sweden, and the UK. The US sample includes 83 auditors (31 senior managers and 52 managers) from Big-Six firms (Bernardi & Arnold, 1994). The research questionnaire (Appendix A) was developed with the assistance of representatives of Big-Six firms located in the United States; representatives of the European firms participating in this research validated the questionnaire.

The research provides four conclusions. First, European auditors lowered their estimates when told they were auditing a low-integrity client. Second, European materiality estimates are a function of Hofstede's (1980) Uncertainty Avoidance. Third, European materiality estimates are positively associated with Wingate's (1997) litigation indices. Fourth, European materiality estimates are higher than US estimates. The sensitivity to client integrity noted in the findings should be encouraging given the growing concern of financial-statement users for auditors to detect fraud. The methodology used to gather the data supports this finding. Rather than ask each auditor to estimate materiality for two types of clients (i.e., one low integrity and one high integrity), the methodology asked experienced auditors (i.e., mean experience was 9.4 years) to estimate materiality for only one type of client. This prevented the participants from comparing their materiality estimates for the two client types; any comparison would ensure that the low-integrity client always received the lower materiality estimate. This sensitivity to a client risk factor should be of some consolation to those in the profession of public accounting due to the increased cost of defending against litigation. There is an interesting implication of the finding on materiality varying with Uncertainty Avoidance. Most believe that harmonization would alleviate many of the problems experienced by international financial-statement users who attempt to compare financial statements from more than one country. However, the finding on Uncertainty Avoidance suggests that, even if international bodies harmonize or standardize the financial regulations and standards without explicit inclusions requiring the disclosure of materiality estimates, financial statements may still not be comparable to users. The differences in materiality estimates associated with each country's Uncertainty Avoidance (Power Distance) score, as well as other national factors, in effect limit the standard-setting bodies' purpose of achieving a harmonized set of financial statements. The analysis indicates that the profession's concern should increase given the findings with respect to litigation. While the level of materiality set in an environment of lower litigation may be an accurate representation of the level of risk desired by the audit firm, the level of materiality set in a higher level of litigation is clearly not. This point raises the concern that a movement by European countries towards more equity-based financing or uniform standards of auditor liability might create a more litigious atmosphere than when the original litigation indices were calculated. Limitations of the research include using only one case study involving an inventory account and one situation-specific factor (client integrity). The scope of the sample (i.e., only western European auditors) also impairs the generalizability of the findings. Other geographical areas (i.e., the Pacific Rim countries or South America) would be appropriate research areas for this topic. The findings also support further research into the effect of multiple scenarios and situational factors. The cultural indices used were those that relate to the cultural environments of 1975–1978 (Hofstede, 1980). This study assumes that people in western Europe have remained the same culturally since 1979. Allowing for these limitations, the relative diversity of the sample with respect to Uncertainty Avoidance (Hofstede, 1980) and litigation (Wingate, 1997) provide support for the research findings. Two other limitations should also be noted. First, a source of concern is that, while Wingate's 1997 sample of the entire European Union showed that Litigation index and Uncertainty Avoidance score are highly correlated, ours do not show a significant correlation. Although this is good in a statistical sense, it is not in a sampling sense because two major European continental countries (i.e., France and Germany) were not included in the sample. Second, the theory development relies on papers that primarily deal with the US setting and few papers that deal with the international setting. While this is understandable, as there is so little information about auditor judgments in an international setting, studies set in the United States Bernardi & Arnold, 1994, Bernardi & Pincus, 1996 and Pany & Wheeler, 1989 may not be completely universal. Future research should attempt to validate the hypothesis that European auditors are significantly different from the general population for the Uncertainty Avoidance. Research should also try to replicate the finding with respect to litigation to determine at what level the cost–benefit considerations prevail and materiality is lowered. Another possible extension would be to examine the countries that already have written quantitative guidelines for materiality in their standards to determine whether this actually affects the level of materiality.