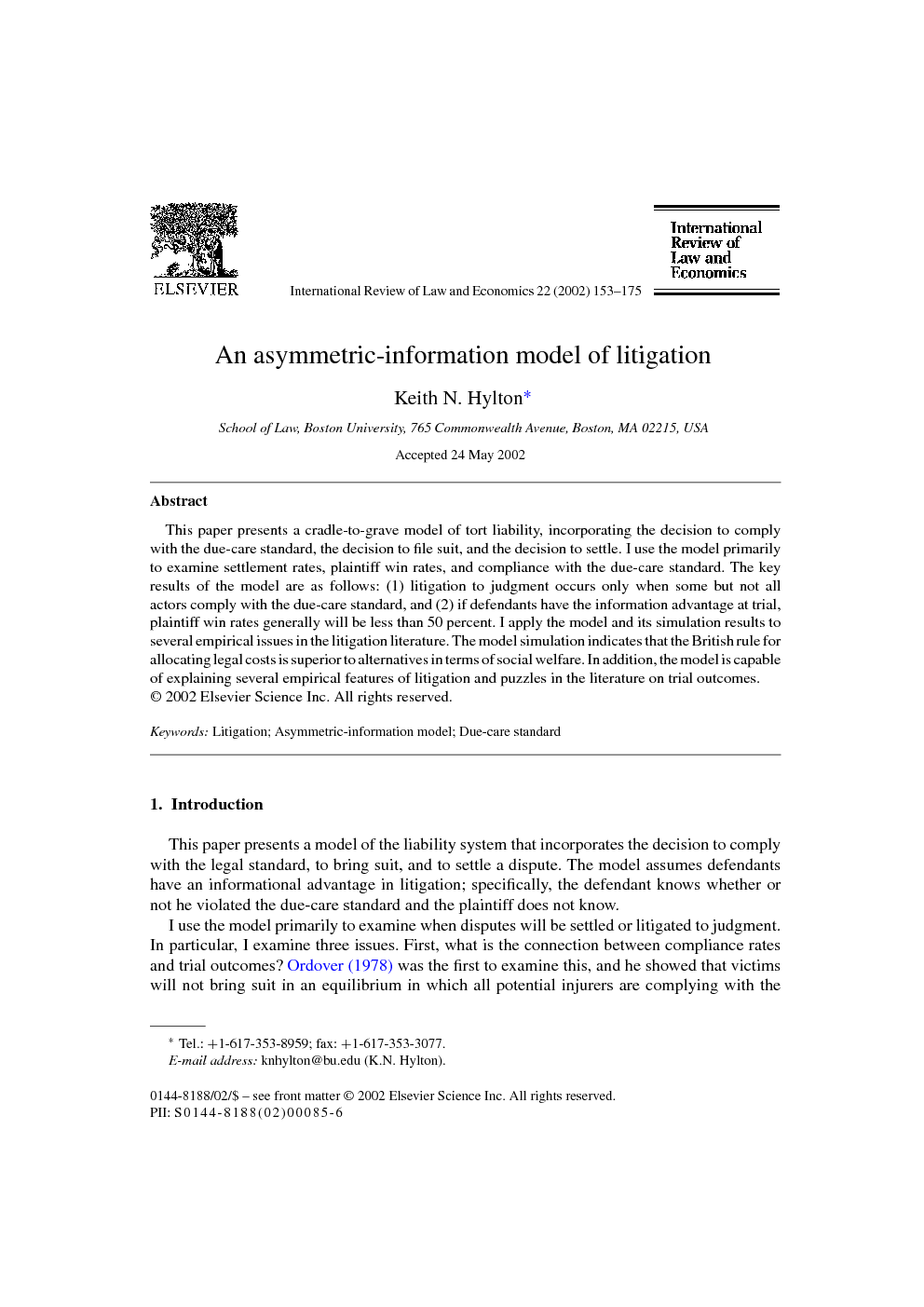 This paper presents a cradle-to-grave model of tort liability, incorporating the decision to comply with the due-care standard, the decision to file suit, and the decision to settle. I use the model primarily to examine settlement rates, plaintiff win rates, and compliance with the due-care standard. The key results of the model are as follows: (1) litigation to judgment occurs only when some but not all actors comply with the due-care standard, and (2) if defendants have the information advantage at trial, plaintiff win rates generally will be less than 50 percent. I apply the model and its simulation results to several empirical issues in the litigation literature. The model simulation indicates that the British rule for allocating legal costs is superior to alternatives in terms of social welfare. In addition, the model is capable of explaining several empirical features of litigation and puzzles in the literature on trial outcomes.

This paper presents a model of the liability system that incorporates the decision to comply with the legal standard, to bring suit, and to settle a dispute. The model assumes defendants have an informational advantage in litigation; specifically, the defendant knows whether or not he violated the due-care standard and the plaintiff does not know. I use the model primarily to examine when disputes will be settled or litigated to judgment. In particular, I examine three issues. First, what is the connection between compliance rates and trial outcomes? Ordover (1978) was the first to examine this, and he showed that victims will not bring suit in an equilibrium in which all potential injurers are complying with the due-care standard. Hylton (1990) showed that if courts make erroneous findings of liability in favor of plaintiffs (type-2 errors) victims will bring suit even if all injurers are complying with the standard. I extend this line of research by examining the connection between settlement rates and compliance rates. I show that victims will continue to sue in the extreme cases of full and zero compliance, but that their claims will be settled. Indeed, litigation to judgment occurs only in equilibria in which some but not all actors comply with the due-care standard. Second, what factors determine the likelihood that a dispute will be settled? The standard approach to this question, the Landes–Posner–Gould (LPG) model,1 suggests that litigation is less likely as litigation expenses increase and as the litigation stakes (the difference between what the plaintiff expects to receive and what the defendant thinks the plaintiff will receive) fall. In this model, which differs from LPG largely by incorporating the compliance decision, the costs-stakes comparison is only one of several factors influencing the decision to settle. The probability of settlement is also influenced by the rate of compliance and by the strategic decisions of litigants. Third, what should one expect of plaintiff win rates? The famous and controversial Priest–Klein analysis suggested plaintiff win rates should be 50 percent.2 Recent articles have shown that when information is asymmetric among litigants, plaintiff win rates of 50 percent are unlikely.3 This paper extends this line of research by yielding a stronger result: if defendants have the informational advantage, plaintiff win rates generally will be less than 50 percent. 4 The model in this paper has implications for empirical results and controversies in the litigation literature. I focus on three: the empirical literature on divergent-expectations versus asymmetric-information models of litigation, the controversy over optimal fee shifting arrangements, and some puzzling stylized facts of the litigation process. Several recent empirical papers try to determine whether asymmetric-information or divergent-expectations (Priest–Klein) theories provide a better account of trial outcomes.5 The plaintiff win rate result of this paper has the straightforward implication that asymmetric-information models provide the better account of trial outcomes in medical malpractice, product liability, employment discrimination, antitrust, and other areas of litigation where plaintiff win rates are consistently below 50 percent.6 In order to suggest additional empirical approaches to comparing divergent-expectations and asymmetric-information models, I compare false acquittal and false conviction probabilities under the two models. The second application of this model is to the fee-shifting question examined in so many law and economics papers. I compare four regimes: British rule (loser pays litigation costs of both parties), American rule (each party pays for its own litigation costs), Pro-plaintiff (plaintiff pays own litigation costs only if he loses), and Pro-defendant (defendant pays own litigation costs only if he loses). In terms of total welfare, the model simulation ranks the fee-shifting regimes as follows (from best to worst): British, Pro-plaintiff, American, Pro-defendant. The key reason for the superiority of the British rule is its effect on compliance. In this model, the British rule generates the highest level of compliance because it maximizes the spread between the expected liability levels of guilty and innocent defendants.7 The third application is two puzzling stylized facts in the litigation literature. One is the judge-jury win rate puzzle identified by Clermont and Eisenberg (1992), who show that plaintiff win-rates are lower in product liability and medical malpractice cases tried before juries than in those tried before judges. This seems to contradict the common intuition that judges are more conservative in awarding damages than are juries. Clermont and Eisenberg resolve the puzzle by arguing that plaintiffs submit weaker cases to juries. My model suggests that the result could be due to guilty defendants settling in higher proportions under juries. Moreover, the defendant-centered perspective of this model, unlike the plaintiff-centered view, is consistent with the general fact that defendants have the informational advantage in malpractice and product liability litigation. The other stylized puzzle I consider is this: it is not hard to find descriptions of the litigation system that suggest that it works like a lottery,8 and yet it is well known that lawyers reject a large percentage of claims brought to them by potential plaintiffs.9 It is clear in this model that some evidence suggesting the litigation process is inaccurate in assessing liability (e.g., high frequency of false convictions) is not inconsistent with its performing well as a deterrent mechanism. Indeed, the settlement process captured by this model exacerbates the tendency toward false convictions already present in an imperfectly accurate though functional liability system. The paper is organized as follows. Section 2 presents the model and the basic results. Section 3 presents applications of the model, including a simulation under various fee-shifting rules. Section 4 discusses implications for the empirical literature.

This paper presents a cradle-to-grave model of tort liability, incorporating the decision to comply with the due-care standard, the decision to file suit, and the decision to settle. The major implications of the model are as follows: (1) litigation to judgment occurs only in equilibria which some but not all actors comply with the due-care standard, and (2) if defendants have the information advantage at trial, plaintiff win rates will generally be less than 50 percent. A simulation of the model indicates that the British rule for allocating legal costs is superior to alternatives in terms of social welfare. In addition to these implications, the model is capable of explaining some empirical puzzles in the literature on trial outcomes.