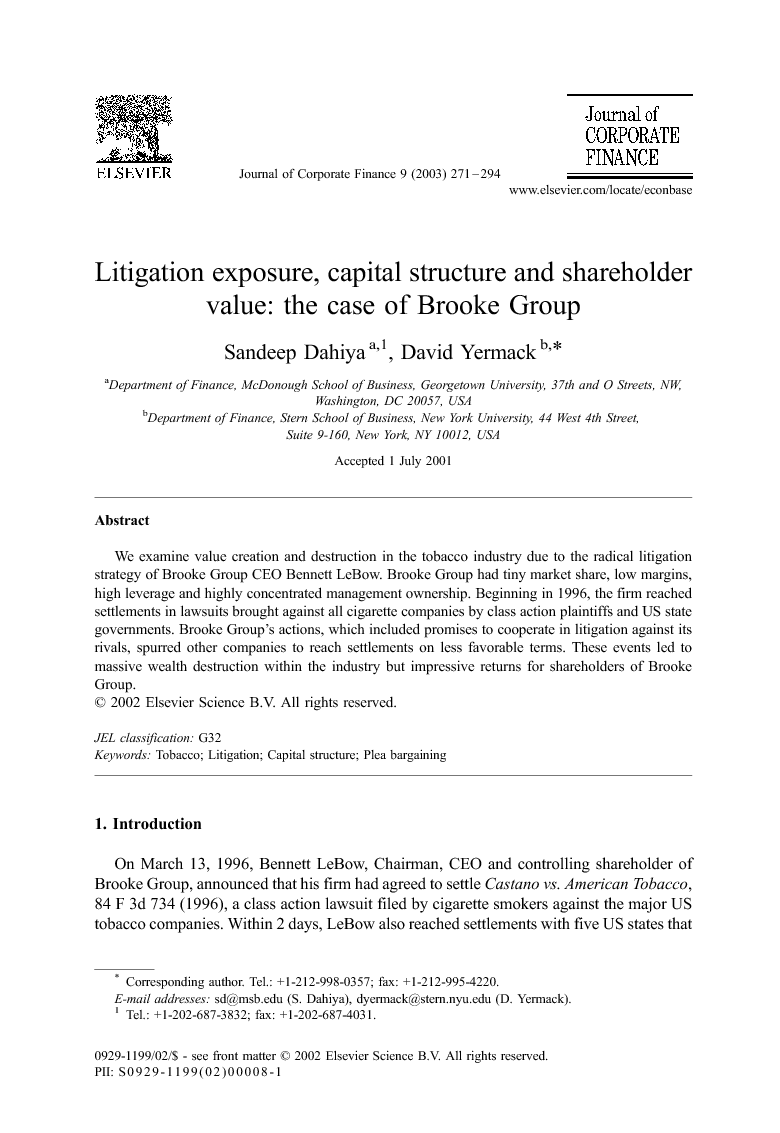 We examine value creation and destruction in the tobacco industry due to the radical litigation strategy of Brooke Group CEO Bennett LeBow. Brooke Group had tiny market share, low margins, high leverage and highly concentrated management ownership. Beginning in 1996, the firm reached settlements in lawsuits brought against all cigarette companies by class action plaintiffs and US state governments. Brooke Group's actions, which included promises to cooperate in litigation against its rivals, spurred other companies to reach settlements on less favorable terms. These events led to massive wealth destruction within the industry but impressive returns for shareholders of Brooke Group.

The tobacco industry in the mid-1990s faced a variety of litigation claims from consumers and government authorities. Bennett LeBow, CEO of cigarette manufacturer Brooke Group, created enormous value for shareholders by adopting a litigation strategy different from that of his industry rivals. While other tobacco companies steadfastly refused to settle lawsuits or cooperate with regulatory authorities, LeBow pursued a strategy of accommodation. By being the first firm in the industry to reach agreements with plaintiffs, LeBow's company secured lenient settlement terms in exchange for cooperating in lawsuits against others. Though LeBow's actions contributed to massive destruction of wealth within the tobacco industry, his own small firm increased in value substantially as regulators implicitly allowed Brooke Group to obtain a portion of the economic rents extracted from his competitors. Our paper extends the literature on how debt affects managerial behavior by highlighting the connection between financial leverage and hypothetical legal liabilities. LeBow's apparent insight was to recognize that large contingent legal claims from tobacco lawsuits represented pseudo-debt on Brooke Group's balance sheet. Under these conditions, LeBow rationally pursued a high-risk strategy of attempting to increase equity value by reducing the value of other claims against his firm's assets. LeBow's actions seem entirely predictable to us, given his firm's tiny market share, negligible cash flow, levered capital structure (even in the absence of litigation), and high ownership concentration. Indeed, an unexplained puzzle of this story is why Philip Morris and the other tobacco companies did not recognize this possibility and buy out Liggett from LeBow years earlier, especially given his reputation as an unorthodox manager with little regard for financial convention. Our study also illustrates opportunities for value creation for both regulators and defendant corporations during legal plea bargaining. In our example, government authorities extended generous financial terms to a small player, and by doing so gained cooperation that facilitated value extraction from other, larger firms. This dramatic outcome of this strategy in the case of tobacco may influence product liability litigation in other industries such as handguns.