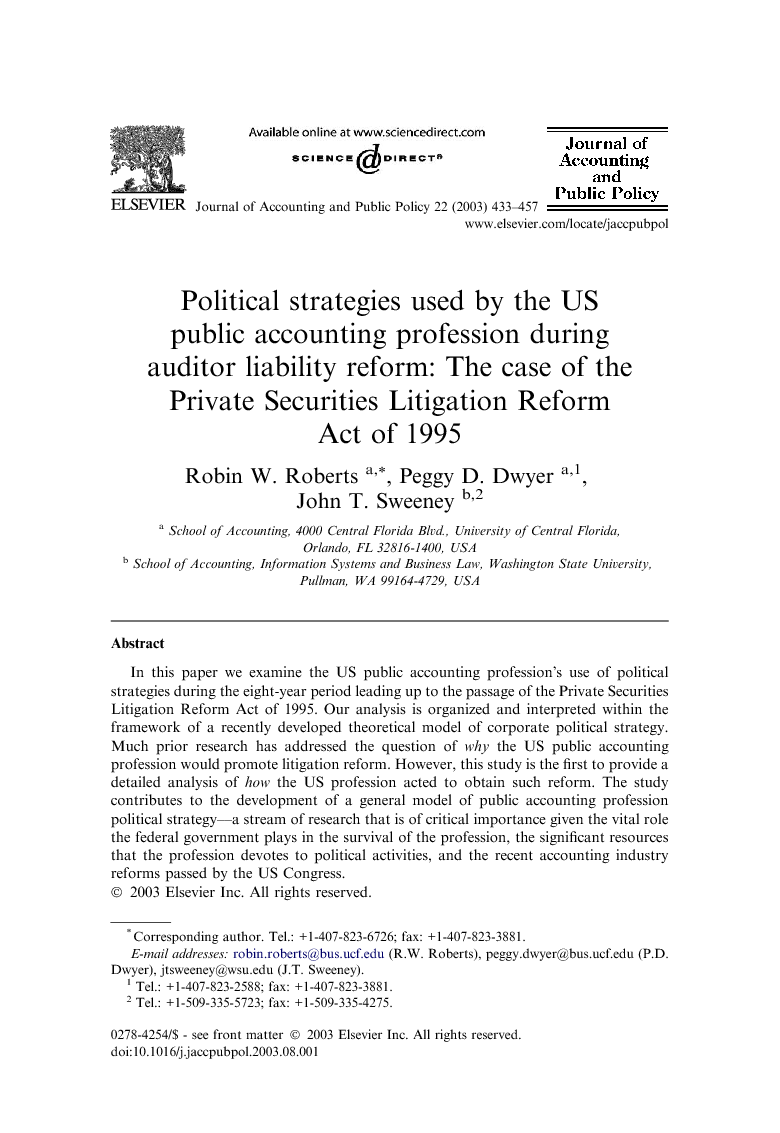 In the aftermath of the Enron collapse, the United States Congress faced enormous pressure to reform the public accounting industry. In response, the House of Representatives, with the support of the American Institute of Public Accountants (AICPA), passed “The Corporate and Auditing Accountability, Responsibility and Transparency Act of 2002”, on April 24, 2002. Sponsored by Representative Michael Oxley (R-Ohio), Chairman of the House Financial Services Committee, the bill was immediately criticized by investor protection groups as little more than a “kiss on the cheek” (Bjorhus, 2002) and a “gift” (Burns, 2002) for the public accounting industry. Notably, the Act did not prohibit the provision of lucrative non-audit services to audit clients, considered by many observers to be at the core of the Enron audit failure (Byrnes et al., 2002). According to former Securities and Exchange (SEC) Chairman Arthur Levitt (Levitt and Dywer, 2002), the Act’s lack of meaningful reform was the direct result of the powerful influence of the US public accounting industry, gained through development of long-term political relationships and monetary contributions.3 Congress did not pass the Oxley bill, however, because additional pressures for substantial public accounting industry reform arose due to subsequent concerns over accounting practices at other large corporations such as Worldcom and Xerox. Ultimately, Congress enacted a compromise version of the bill known as the Sarbanes–Oxley Act. The Sarbanes–Oxley Act included stricter provisions regarding the provision of consulting services and federal regulation of the public accounting profession. Although the recent accounting industry reforms garnered much public attention, Levitt points out that the public accounting profession’s political influence at the federal level resulted from their long-term involvement in US federal politics. Therefore, in order to understand recent accounting industry reforms, we argue that it is important to study the public accounting profession’s involvement in federal policymaking in a broader sense. Our study contributes to the development of this line of research by examining the profession’s involvement in an eight-year effort that culminated in the passage of the Private Securities Litigation Reform Act of 1995 (hereafter, the Reform Act). Other accounting researchers have studied why the US public accounting profession (hereafter, the US profession) would push for reforms of federal securities laws (e.g., Dopuch et al., 1994; Palmrose, 1994; Narayanan, 1994; Lys and Watts, 1994; Carcello and Palmrose, 1994; Cloyd et al., 1996; Dopuch et al., 1997; Palmrose, 1997; Cloyd et al., 1998). While the prior accounting research provided an important rationale for reform, an equally important question regarding changes in federal securities laws has not been addressed. That question concerns how (not why) the US profession pushed to achieve federal securities law reform. 4 Two factors support the need for developing this research stream. First, the US profession federal/government relationship is vital to the profession’s economic survival and success. Federal legislation may affect professional practice directly (e.g., securities litigation reform and accounting industry reform). It also may affect the substantive content of the profession (e.g., changes in tax laws and changes in fraud reporting requirements). Olivia F. Kirtley, former Chair of AICPA, suggested the importance of the relationship by stating: “We want to have easy access to Congress when it is debating issues important to the profession, and we also want to serve as a resource to Congress when it is addressing complex financial matters”. (Koreto, 1998, p. 76). Second, the political actions of professional and business organizations consume significant resources (Grenzke, 1989b; Snyder, 1992). For example, during the election periods that are relevant to our study (1988–1996), the combined expenditures of the political action committees for the AICPA and the Big 6 (now the Big 4) accounting firms exceeded $17,000,000 (FECInfo, 1999). These amounts include expenditures on only one, readily identifiable type of corporate political activity, campaign contributions, and are thus an underestimate of total political expenditures. Our study proceeds as follows. In Section 2 we describe prior research on corporate political strategy, focusing on a recently published model of those activities. In Section 3, we use that model to frame a detailed case analysis of how the US profession acted politically to bring about passage of the Private Securities Litigation Reform Act of 1995. Section 4, contains additional, in-depth analyses of the profession’s financial tactics to examine whether those tactics appeared to be rational and effective. Finally, conclusions and suggestions for further research are presented in Section 5.

As this paper is being written, the instances of misleading financial reporting by such giants as Enron, Worldcom, Xerox, Tyco, Global Crossing and the accompanying charges of inappropriate auditor conduct are still reverberating within the economy. Former SEC Chair Arthur Levitt, in his book Take on the Street ( Levitt and Dywer, 2002), contends that the political power of the public accounting profession has created a legislative climate where the accounting industry is able to influence Congress to the benefit of itself and its clients, but often to the detriment of the public interest. In this paper, we examine how the public accounting industry gained political power by focusing on the strategies it utilized to successfully influence a reduction in legal liability. We learn that accounting firms, in their attempt to influence legislation, pursue a coordinated, well-financed, and directed political strategy. In conclusion, we find that a number of activities undertaken by leaders of the US profession in connection with the passage of private securities litigation reform are consistent with the propositions of the HH (1999) model of corporate political strategy. Our findings were most consistent with the model as it relates to a firm’s overall approach to political strategy. We found, consistent with the HH model propositions, that the US profession adopted a relational approach to general political strategy that is long-term and spans multiple issues. We found mixed support for the HH (1999) model regarding the firms’ level of participation. The Big 6 firms participated individually. Collective level participation also occurred through activities of the AICPA and through special purpose coalitions. This choice of participation at both the individual and the collective level is not formally incorporated in the HH model. However, since the conditions identified by HH for individual versus collective participation are not mutually exclusive, we do not consider this finding to be blatantly inconsistent with the HH model. In addition, we do not necessarily expect to observe both individual and collective participation on other issues. Having chosen a relational general strategy does not mean that firms and the AICPA will participate on every political issue. Further, it does not mean that they will always adopt a collective level of participation. Future research on other political issues is needed to clarify the conditions under which level of participation will totally conform to the propositions of the HH model. We also found the strategies and tactics chosen by leaders of the US accounting profession to be only partially consistent with the predictions of the HH (1999) model. The model asserts that a high-credibility firm using an overall relational approach is more likely to adopt informational and constituency building strategies and tactics. Our analysis revealed extensive use of a informational tactics and a modest use of constituency building tactics. The constituency building tactics included the sponsorship of two coalitions, the use of advocacy advertising, and the use of other public relations efforts. In contrast to the explicit assertions of the HH (1999) model, we observed extensive use of financial incentive tactics (specifically political contributions and hiring of experienced policy makers) by the leaders of the US profession. In the HH model, high credibility firms who have undertaken a general relational strategy are posited to be less likely to adopt financial tactics. Our empirical findings concerning the determinants of PAC giving and legislative voting are supported by prior research; therefore we suggest that the HH model’s assertions concerning financial incentive strategies may require additional conceptualization and development. In closing, we note certain limitations of our study. As a case study, our central purpose was to document and place the US profession’s efforts to achieve litigation reform within an accepted theoretical framework. Our secondary, in-depth analysis of PAC contributions and voting was concentrated on one issue during a specific time period, and ended with the passage of the primary legislation, even though follow-up legislation occurred. Thus, while the profession appears to use a relational approach, we are unable to generalize our findings to other issues or other time periods. Finally, our analysis was not intended to present a complete portrayal of the related legislative process. Future research using interview data as well as archival sources could provide additional insights. The case evidence supports the notion that the profession is extensively involved in federal public policy issues. Overall, we believe that the HH (1999) model, along with our findings, can be used to develop a general model of the public accounting profession’s political strategy. This framework, along with our findings, can be particularly useful in studying the profession’s engagement in the political process over accounting industry reform.