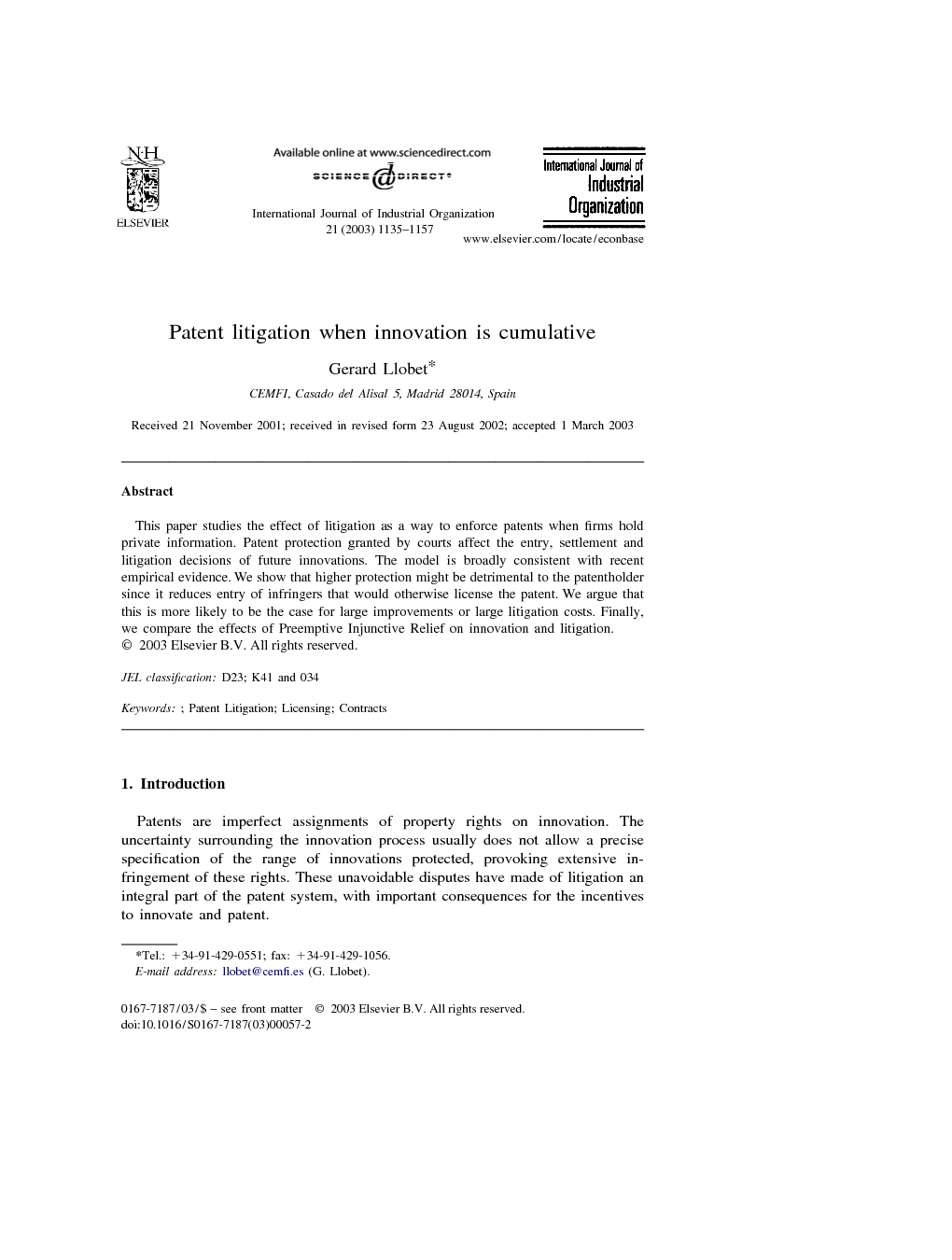 This paper studies the effect of litigation as a way to enforce patents when firms hold private information. Patent protection granted by courts affect the entry, settlement and litigation decisions of future innovations. The model is broadly consistent with recent empirical evidence. We show that higher protection might be detrimental to the patentholder since it reduces entry of infringers that would otherwise license the patent. We argue that this is more likely to be the case for large improvements or large litigation costs. Finally, we compare the effects of Preemptive Injunctive Relief on innovation and litigation.

The goal of this paper was to study how the enforcement of Intellectual Property Rights affects the decisions to innovate. While other papers, such as Aoki and Hu (1999), have considered the effect of litigation on the value of patents, they usually study the trade-off that imitation constitutes between adding competition and the incentives to innovate. Nevertheless, patents also affect the decisions of future innovators. This paper tries to address this issue. We have presented a model of patent settlement that takes explicitly into account the consequences of litigation, or the threat of using it. The results show that with private information on the quality of new ideas there is in equilibrium a certain amount of litigation, together with the settlement of low quality innovations. We stress the fact that the protection that patents grant is intimately related to the way in which it is enforced by courts. The outcome of the legal procedure is used by the patentee as a threat to obtain better terms in the negotiation with the infringer. However, more protection has a downside. The patentee cannot commit beforehand to offer a particular license, and therefore, as courts become more favorable to patentees, only the best infringers will enter. Since an important part of the value of a patent stems from licensing to future innovators more protection does not necessarily mean more profits for the patentee. This effect is particularly important on inventions that have a high value, because they already deter more entry. By explicitly modeling the legal institutions, the model allows us to compare different legal systems. In particular, we study the consequences of a legal motion that has become popular in recent years, the Preemptive Injunctive Relief. Its use seems to benefit relatively more better inventors by increasing their licensing revenue. The answers provided in this paper are far from complete. We show that the effects of patent protection and litigation costs are more complex than what is usually considered. However, not much has been said about the socially optimal amount of protection. Some preliminary numerical results show that the Preemptive Injunctive Relief should be granted to innovations that have a higher market value, together with more protection to the corresponding patentees. Finally, in this paper we have abstracted from the dynamic environment associated to the negotiation among the parties, and for simplicity we have collapsed all the process in a take-it-or-leave-it offer. An interesting extension would include the study of the dynamic decisions undertaken by firms. In particular, the output market can be understood as a way to obtain noisy signals of the quality of the improvement. As a result, the decisions of the patentee to produce, the timing of the licensing agreements and trials, as well as the decisions taken by courts will depend on this signal extraction mechanism. The speed of the trials is also an interesting and unexplored policy variable that will affect the use and optimality of the Preemptive Injunctive Relief.