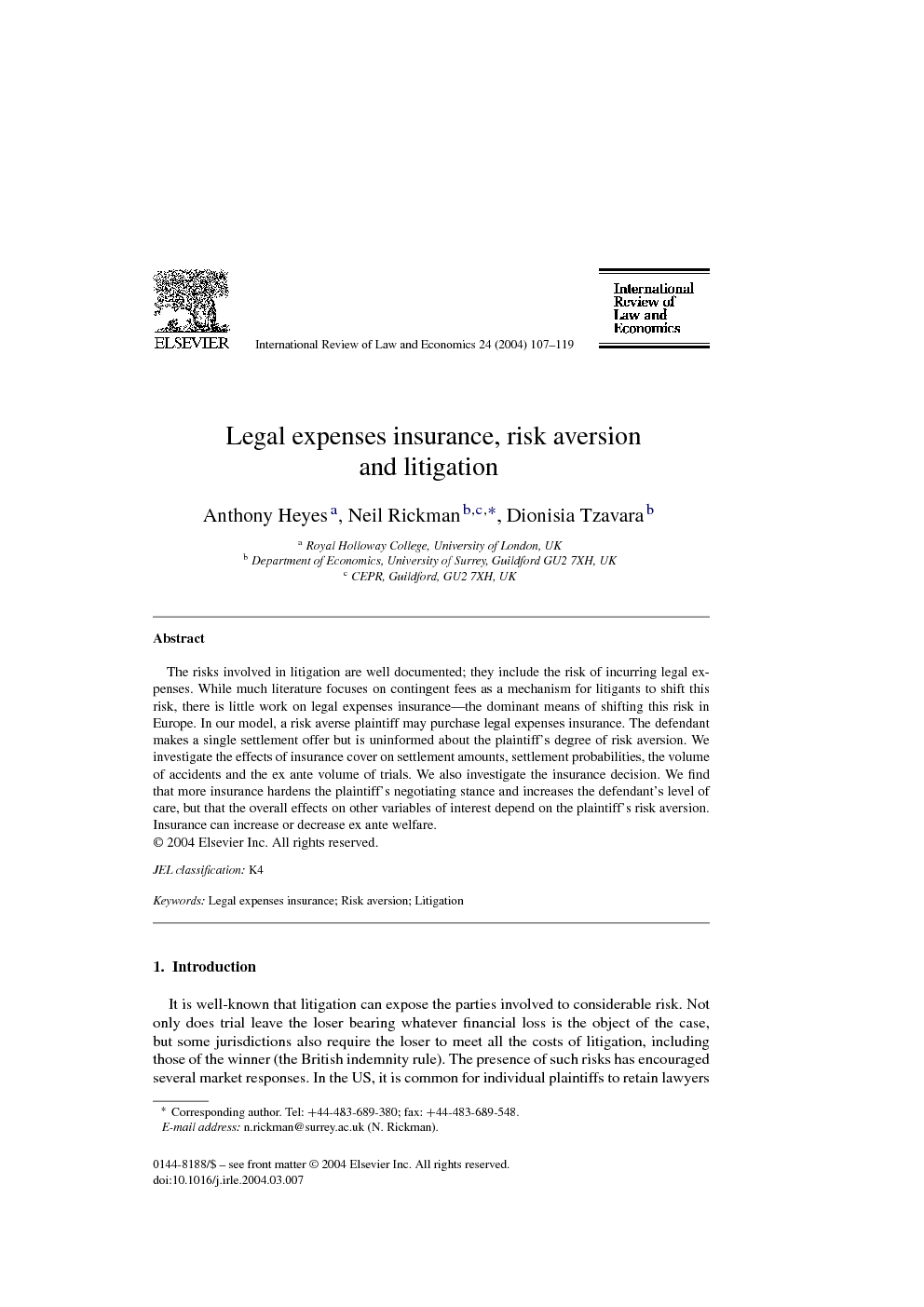 The risks involved in litigation are well documented; they include the risk of incurring legal expenses. While much literature focuses on contingent fees as a mechanism for litigants to shift this risk, there is little work on legal expenses insurance—the dominant means of shifting this risk in Europe. In our model, a risk averse plaintiff may purchase legal expenses insurance. The defendant makes a single settlement offer but is uninformed about the plaintiff’s degree of risk aversion. We investigate the effects of insurance cover on settlement amounts, settlement probabilities, the volume of accidents and the ex ante volume of trials. We also investigate the insurance decision. We find that more insurance hardens the plaintiff’s negotiating stance and increases the defendant’s level of care, but that the overall effects on other variables of interest depend on the plaintiff’s risk aversion. Insurance can increase or decrease ex ante welfare.

It is well-known that litigation can expose the parties involved to considerable risk. Not only does trial leave the loser bearing whatever financial loss is the object of the case, but some jurisdictions also require the loser to meet all the costs of litigation, including those of the winner (the British indemnity rule). The presence of such risks has encouraged several market responses. In the US, it is common for individual plaintiffs to retain lawyers on a contingent basis, thereby shifting some risk on costs to their agent. Alternatively, the majority of European jurisdictions have well-developed insurance markets where protection against the risk of legal expense can be purchased (see Prais, 1995). In England and Wales, although the market for such legal expenses insurance (LEI) has developed slowly (see Rickman & Gray, 1995), this position is changing as policy makers look to substitute private insurance for the increasingly expensive social insurance against legal expense provided by legal aid (see Lord Chancellor, 1998). Despite this European emphasis on legal expenses insurance, as opposed to contingent fees, research on the economics of litigation has focused strongly on the latter;1 exceptions are Kirstein (2000) and van Velthoven and van Wijck (2001). Indeed, more generally, although risk is endemic in litigation, risk aversion features in very few formal models of settlement bargaining. In this paper, we seek to address both matters by analysing the effects of legal expenses insurance on litigation, under circumstances where the defendant is uninformed about the plaintiff’s degree of risk aversion (in contrast to the complete information, risk neutral settings of Kirstein, 2000; van Velthoven & van Wijck, 2001). In principle, the effects of LEI are manifold and will include the signaling associated with an insurer being willing to allow a policy holder to pursue a case (this will usually be done after a merits test) and the interactions between insurance purchase and self-protection measures which individuals can undertake (see Ehrlich & Becker, 1972). Our model abstracts from these, focusing instead on settlement behaviour, care decisions (and hence the number of accidents), the volume of trials and on how the plaintiff’s purchase decision is affected by these. Such matters have received attention in British and European policy debate, where the ability of alternative funding arrangements to enhance access to justice without congesting the legal system has been a key concern.2 As mentioned above, a feature of our model is the explicit treatment of risk aversion in modeling pre-trial behaviour. This is often ignored by literature which seeks to model settlement negotiations. Exceptions include Farmer and Pecorino (1994) and Swanson and Mason (1998).3 Like these authors, we assume that the defendant makes a settlement offer when uninformed about the plaintiff’s degree of risk aversion. We follow Swanson and Mason (1998) by explicitly modeling settlement negotiations in the presence of such risk aversion. However, apart from its focus on LEI, our paper also differs by considering initial care decisions and, therefore, the welfare effects of such insurance. Gravelle (1989) also models a risk averse plaintiff and initial care decisions. Unlike our paper, however, he assumes that the defendant is aware of the plaintiff’s degree of risk aversion and the focus of his model is cost allocation rules.4 We find that having insurance hardens plaintiffs’ bargaining strategies in post-accident settlement negotiations and may induce higher settlement offers. Further, assuming that defendants are sufficiently plentiful as to ignore the effects of care on the LEI premium, the availability of insurance raises ex ante care levels. The number of trials is reduced ceteris paribus by this effect but is, overall, affected ambiguously because LEI may increase or decrease settlement offers. So much for behaviour during litigation. We also look at the prospective plaintiff’s decision to purchase LEI, and the welfare effects of doing so. We find that prospective plaintiffs will only purchase LEI if they plan to reject the likely settlement offer should they be involved in an accident. Further, they choose to be fully insured. Plaintiffs who anticipate accepting the offer do not buy insurance. The effects of insurance on ex ante welfare depend on the above effects on litigation itself, as well as on the net social value of trials. Our results suggest that insurance is likely to increase welfare when it induces higher settlement amounts from defendants. Apparently, policy makers need to examine these various effects of LEI before offering unequivocal endorsements of this method of litigation funding. The paper is structured as follows. In Section 2 we present the basic model and examine the plaintiff’s purchase decision when LEI is available. Section 3 then considers the defendant’s behaviour before Section 4 combines these to address the effects of insurance on settlement offers, settlement probabilities, care levels, trial volumes and ex ante welfare. A final section concludes.

Analytically, the role of legal expenses insurance is complicated by the need for analysis to recognise risk aversion as an important reason why such policies are purchased. This motive is distinct from the strategic purchase of LEI modelled by Kirstein (2000) and van Velthoven and van Wijck (2001). Accordingly, this paper’s contribution involves a rare treatment of risk aversion in litigation as well as of legal expenses insurance—the dominant means of providing access to justice in Europe—and the first attempt to combine the two. Further, and again unlike existing literature on LEI, the paper assumes litigation to involve asymmetric information between the parties. In general, ambiguity in the results of litigation models with private information is common (see, e.g. Gravelle, 1990; Gravelle & Waterson, 1993). As a result, policy conclusions are not always as clear as one might like. In our case, this ambiguity is enhanced by the potentially delicate relationship between the plaintiff’s risk aversion and the activities comprising the litigation process. Despite this ambiguity, a number of interesting findings emerge from the model. Thus, we are able to say that insurance makes plaintiffs more willing to reject settlement offers ceteris paribus and that this can have the effect of increasing the offers from defendants. As a result, LEI need not reduce the probability of settlement. Insurance also induces extra care from potential defendants. The effects on the overall probability of trial are ambiguous, although there is a clear reduction if insurance increases settlement offers: apparently there need be no positive link between LEI and demands on court time. We have also examined the plaintiff’s incentive to purchase LEI, and shown that this is determined by her anticipated reaction to settlement offers that may be forthcoming should she ever face litigation; plaintiffs who do purchase LEI opt for full cover. The fact that LEI may, but need not, increase social welfare is a particularly interesting result given its (growing) popularity as the preferred method of ensuring access to justice in Europe. It seems clear that, whilst this policy stance need not be misplaced, further theoretical and empirical research on LEI would help untangle the conflicting forces we have identified when evaluating LEI. Other issues also appear to be topics for fruitful research. We have ignored the classic information problems surrounding insurance and the effects these may have on litigation. For example, an insurance company will rarely allow a case to go forward without screening its merits first. This should act as a signal to the defendant (if the presence of LEI is observable) and might alter his behaviour in litigation, as well as before. Also, there is likely to be an interesting qualitative difference in the operation of before-the-event LEI (as modeled here) and the after-the-event policies beginning to appear in Britain; e.g. the latter should be able to control better for adverse selection amongst plaintiffs. Further, it would be interesting to explore cases where LEI may be purchased for the strategic purpose of making the plaintiff’s threat to go to trial credible (by reducing her costs)—see Kirstein (2000) and van Velthoven and van Wijck (2001). Interestingly, under asymmetric information, results in Nalebuff (1987) imply that this might be a Pareto improving purchase. Finally, allowing for multiple accident types, dynamic extensive forms and a comparison of legal expenses insurance with the operation of other means of funding litigation, such as contingent fees, are all important. With the profile of legal expenses insurance already high or rising in a number of European jurisdictions, and a variety of policy innovations emerging, these are interesting and important areas for future research. The current paper clearly does not address all of these. It is, however, a contribution to what is likely to be a growing research area.