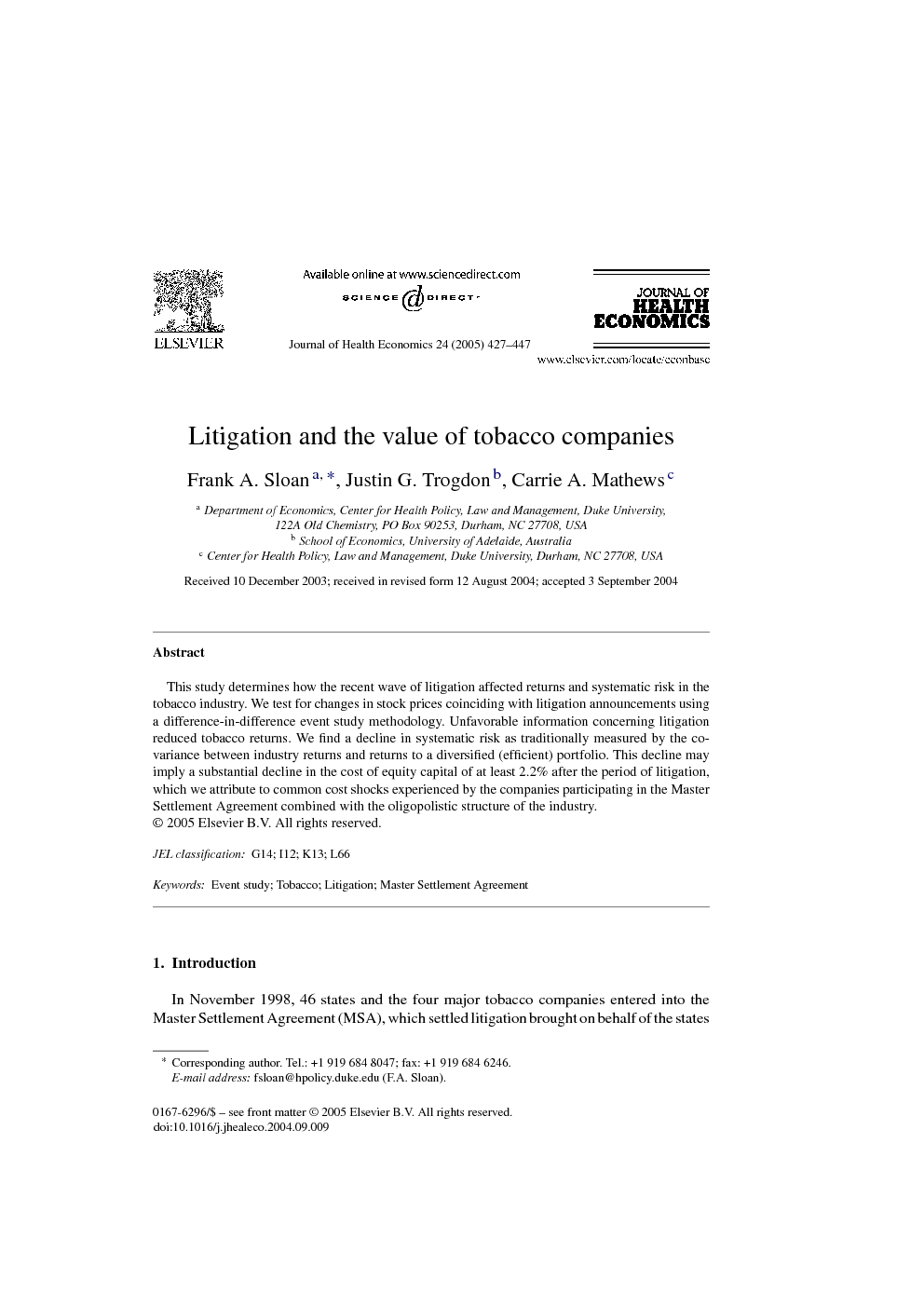 This study determines how the recent wave of litigation affected returns and systematic risk in the tobacco industry. We test for changes in stock prices coinciding with litigation announcements using a difference-in-difference event study methodology. Unfavorable information concerning litigation reduced tobacco returns. We find a decline in systematic risk as traditionally measured by the covariance between industry returns and returns to a diversified (efficient) portfolio. This decline may imply a substantial decline in the cost of equity capital of at least 2.2% after the period of litigation, which we attribute to common cost shocks experienced by the companies participating in the Master Settlement Agreement combined with the oligopolistic structure of the industry.

In November 1998, 46 states and the four major tobacco companies entered into the Master Settlement Agreement (MSA), which settled litigation brought on behalf of the states in order to recover medical expenses paid by government insurance agencies attributed to illness resulting from consumption of tobacco products (National Association of Attorneys General, 2003). The four remaining states (Florida, Minnesota, Mississippi, and Texas) settled separately with the companies. The MSA stipulated that the tobacco companies pay states an estimated US$ 206 billion (undiscounted) over the next 25 years (Cutler et al., 2002 and Viscusi, 2002). The MSA brought to an end a period of intense litigation against cigarette manufacturers that began in 1988 with Cipollone versus Liggett Group, the first tobacco lawsuit in which damages were awarded to the plaintiff. 1 This award was eventually overturned, but language in the Supreme Court opinion encouraged further filings. Since then, a large number of suits have been brought against cigarette manufacturers by individuals, groups of individuals (class action suits), and government entities. This study's objective is to determine how the recent wave of litigation affected equity returns in the tobacco industry and systematic risk of securities issued by these firms, and thereby their cost of equity capital. The topic is important for two reasons. First, to the extent that equity returns are affected by litigation in general and the MSA in particular, there are potential distributional effects—some winners and some losers. The MSA had direct impacts on smokers through the associated increases in cigarette prices and on taxpayers through the payments made to the states pursuant to provisions in the MSA. The MSA and related litigation also affected owners of cigarette manufacturers’ equity. As explained below, the MSA and other litigation may have affected the volatility in returns to investments in the manufacturers’ cost of capital and by reshaping the incentives to both the firms and regulators at the state level, the correlation of returns with the market. To the extent that litigation against the tobacco companies and the resulting settlements affected the cost of capital, the long-run size of the sector is potentially affected. If cost of equity capital rises, some investments in the sector which were heretofore profitable are no longer so and conversely for decreases in equity cost. We use an event study method to analyze daily stock returns and test for significant changes in stock prices at announcements of new information regarding litigation against the industry. Under the efficient market hypothesis, stock prices should reflect all available information about future cash flows and risk of the firm (Johnson et al., 1991). Thus, as new information becomes available regarding changes in the industry, the change in the stock prices of the firms in that industry can be used to assess the impact of the information on expected firm profitability. Ours is the first study of this kind to assess industry returns in a period during which litigation has been widespread and the first to explicitly account for diversification by cigarette manufacturers in several other markets. Any financial shocks in these other markets that coincide with litigation events would cause us to erroneously attribute changes in returns to tobacco litigation. We use a difference-in-difference approach to net out the effects of shocks common to tobacco and other related industries. We find that systematic risk declined after the period of litigation, a result robust to various controls for the time-series behavior of the stock data and definitions of the event window. We attribute this finding to provisions in the MSA in combination with the oligopolistic structure of the industry. In addition, unfavorable information concerning litigation reduced tobacco returns relative to returns from the other industries in which the companies also participate and, conversely, favorable information increased tobacco returns relative to the other industries.

We find that the recent period of litigation against cigarette manufacturers initially hurt the stockholders of these companies, but after the MSA was implemented, variation in returns was less closely related to returns in a well-diversified equity portfolio and the required return on equity in these companies fell. The initial decline in returns is intuitive. The rulings against the cigarette manufacturers imposed large claims against the profits of these companies and signaled the possibility of more such rulings. In addition, we have given several reasons for why the MSA made the tobacco industry more attractive to suppliers of equity capital. The overall effect of the MSA seems to have been to reduce the cost of equity capital measured over the years post-MSA of those companies that participated in the settlement.14 Firms appear to have benefited from a decrease in systematic risk and cost of capital, especially after the negative returns caused by litigation earlier in the period. States gained revenue not only from the settlement payments directly, but also through the ability to raise cigarette excise taxes in a new political environment (Sloan and Trogdon, 2003). The primary losers were smokers who faced higher cigarette prices and taxes afterwards (Sloan and Trogdon, 2004).15 The event study approach has several limitations. First, our empirical specification is based on the CAPM model of stock returns, which assumes that only a single factor (systematic risk) affects returns. There is a voluminous literature which has evaluated the CAPM and compared it to alternative models.16 The alternatives relax some of the CAPMs restrictive assumptions. Yet none of these models is as widely used as the standard CAPM model (see, e.g., Brealey and Myers, 2003, p. 203). Second, we are able to provide theoretical reasons why systematic risk should have decreased post-MSA. All explanations rely on restrictive, albeit different, assumptions. Third, we use a 5-year post-litigation period. A longer period may have yielded different findings. However, there are arguments in favor of a 5-year follow-up period. For one, comparing a 4- and 5-year follow-up, results are very similar. Also, as one gets further from the event it becomes more difficult to attribute observed patterns to the event. Both definitions include at least one year of data, which is standard when using daily stock returns in event studies (Lamdin, 2001). Fourth, a lack of significance for announcements in an event study can occur from misspecification of the events. If anticipation occurs, stock prices for the defined event have already incorporated the new information, which would lead to an underestimate of the announcement effect. We construct a 3-day window around each announcement to control for this, but anticipation bias could still bias our results towards zero. Fifth, we use a difference-in-difference methodology, but applied in a slightly different way than is usual in the literature. In this study, we use the method primarily to control for the fact that the tobacco companies are multi-product firms. In the traditional use of the method, the control group would be chosen to be representative of the treatment group (e.g., cigarette manufacturers) without the treatment (e.g., litigation). Our control group would also fit that criterion if the firms entered these other industries to take advantage of economies of scope in production and distribution. For instance, the largest industry represented in our control group portfolio is the food industry (Kraft for Philip Morris and Nabisco for R.J. Reynolds). Both food and cigarettes are consumer non-cyclical and share cost complementarities in distributing goods to convenience stores and groceries. A factor analysis of industry returns shows that tobacco and beverage industry returns, another industry in the reference group, load on the same factor (McGowan and Francis, 1991). However, if firms chose these industries for diversification of risk, then the control group would not be otherwise similar to the treatment group. If diversification means that other markets respond counter to the cigarette market in response to information concerning litigation against the tobacco companies, then our estimates overstate the impact of litigation on the tobacco operations of the firms. Tobacco companies’ risk diversification plausibly comes through the smoothing of business cycle shocks and not through expected shifts in returns due specifically to litigation. The parties to the MSA probably did not have potential effects on the industry's cost of equity capital as a primary consideration in the negotiations. If asked, tobacco control advocates would have probably preferred that the cost of capital increase post-MSA rather than decrease. Facing a lower cost of capital, tobacco companies have an incentive to undertake investments that they may have regarded as unprofitable previously. In this sense, the MSA provided a boost for the industry, even though other effects, such as the effect of the price increase on the quantity of cigarettes demanded in the long run, had the opposite influence.