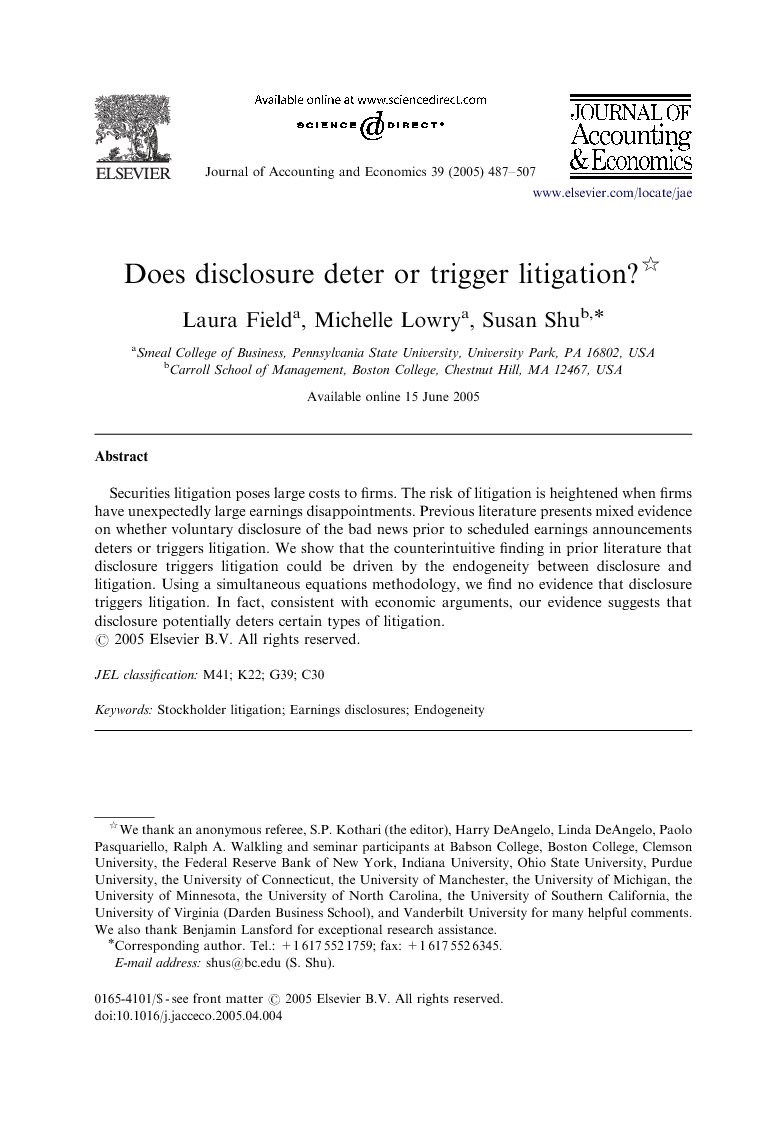 Securities lawsuits are costly to firms. They divert management time away from more productive efforts, involve substantial attorney fees, and can damage the reputation of the firm and its managers. The risk of litigation is heightened when firms’ earnings are substantially lower than investors expected. In these cases firms have strong incentives to employ mechanisms to lower their legal exposure. Lev (1992) and Skinner (1994) suggest that preemptive measures such as voluntarily issuing an earnings warning can potentially decrease the probability of a lawsuit, yet they do not provide direct evidence on the deterrence effect of voluntary disclosure. In fact, the only direct evidence regarding the effects of early disclosure on the likelihood of litigation comes from Francis et al. (1994). Interestingly, they find the opposite result, i.e., early disclosure increases the probability of a lawsuit. Both the Skinner paper and the Francis et al. paper have been influential and widely cited in the literature. Given the opposite conclusions drawn in these papers, it is surprising that there has not been more research on whether disclosure deters or triggers litigation. In their review paper, Healy and Palepu (2001) highlight this relation between early disclosure and litigation and note that the empirical evidence is mixed. Similarly, Johnson et al. (2001) characterize this issue as a “controversy in prior literature.” In this paper we try to reconcile the conflicting views in the literature by providing more direct evidence on the complex relation between early disclosure and litigation risk. Several factors potentially cause earnings warnings to decrease the likelihood of being sued. First, Skinner (1994) argues that early disclosure weakens the claim that managers acted improperly by failing to disclose the information promptly, thus lowering the probability of a lawsuit. Second, voluntary disclosure might reduce the contingent loss in the case of a lawsuit. Skinner (1997) documents that more timely disclosure leads to a lower settlement amount even if a lawsuit cannot be avoided. By informing the market of bad news before the scheduled earnings announcement, the firm decreases the amount of time that the stock trades at misleading prices, thus decreasing recoverable damages. Third, with lower potential damages, plaintiffs’ incentives to bring a lawsuit are reduced. Finally, a stylized fact is that class action lawsuits tend to be precipitated by large one-time stock price drops (e.g., Francis et al., 1994; Grundfest and Perino, 1997). Partially revealing the bad news through voluntary disclosure might reduce lawsuit probability by avoiding a single, large stock price drop upon the earnings announcement. Of course, there are also costs to disclosure. Examples include the direct costs of preparing and disseminating information and also various indirect costs such as revealing proprietary information to competitors (e.g., Dye, 1986; Darrough and Stoughton, 1990; Graham et al., 2004). For firms with low litigation risk, the costs of disclosing may exceed the benefits, and consequently these firms will choose not to disclose bad news early. Kasznik and Lev (1995) and Shu (2003) find that about 50% of their sample firms that experienced earnings disappointments issued some form of earnings warnings, while the other 50% remained silent. If early disclosure is an effective deterrent to litigation, one might expect firms that warn the market about upcoming earnings disappointments to be sued less often. However, Francis et al. find that the earnings warnings in their sample tend to be followed by securities lawsuits. This seems to suggest that disclosure results in more litigation, rather than less. Their results and analyses cast doubt on the effectiveness of voluntary disclosures as deterrents to lawsuits. However, as pointed out by Skinner (1997), the Francis et al. (1994) analysis potentially suffers from an endogeneity problem. Specifically, when a firm has especially bad news, managers have stronger incentives to disclose the bad news early to reduce the expected legal costs. At the same time, this firm likely faces a higher probability of litigation. This causes a spurious positive relation between disclosure and lawsuit probability, potentially masking any deterrence effect that might exist. While Skinner (1997) provides insights into the endogeneity problem, he does not explicitly test whether early disclosure reduces litigation risk after controlling for the endogeneity. In this paper, we take into account the endogenous relation between disclosure and expected litigation risk. As alluded to earlier, there are two distinct dimensions of the disclosure–litigation relation. First, firms that disclose bad news early might be less likely to be sued, suggesting a negative relation between litigation risk and disclosure. However, firms are more likely to disclose bad news early if they face higher legal exposure, suggesting a positive relation. To disentangle the two effects, we employ a simultaneous equations framework. This framework enables us to examine: (1) whether firms with higher litigation risk are more likely to make early disclosures about impending earnings disappointments (preemption effect), and (2) whether such disclosures lower the expected lawsuit probability (deterrence effect). Findings regarding the preemption effect confirm that firms with higher litigation risk are more likely to issue earnings warnings, as previously documented by Johnson et al. (2001). We briefly discuss these results, but focus our attention on whether earnings warnings effectively decrease the probability of being sued. Our findings do not support the notion that disclosure causes litigation, as Francis et al. suggest. Further, there is some indication that disclosure may actually deter certain types of lawsuits. Our paper also provides evidence on the extent to which litigation risk affects firm disclosure policy after the enactment of the Private Securities Litigation Reform Act of 1995 (PSLRA). The intent of this Act is to restrict frivolous securities class action fraud lawsuits. If this Act causes litigation risk to be less of a concern to firms, firms may now be less likely to use disclosure as a means to deter lawsuits. Our results suggest that the relation between disclosure and litigation risk appears to hold in this purportedly lower litigation risk environment. The remainder of the paper is structured as follows. Section 2 describes how we obtain our data and provides some descriptive statistics. Section 3 discusses the simultaneous equations methodology employed in this paper. In Section 4, we present the empirical results. Finally, Section 5 concludes.

This paper investigates whether earnings warnings are effective in deterring litigation. Although Lev (1992) and Skinner (1994) argue that early disclosure of impending earnings disappointments should reduce litigation risk, the empirical evidence is mixed. Johnson et al. (2001) write, “Recent research examining litigation-based incentives to voluntarily disclose bad news… provides conflicting evidence on the causal relation between forecasts of bad news and the incidence of shareholder litigation.” We demonstrate in this paper that the conflicting evidence to which Johnson, Kasznik, and Nelson refer may be at least partially driven by the endogenous relation between disclosure and litigation risk. Although Skinner (1997) recognizes the potential problems such endogeneity can create, he does not provide direct evidence on the deterrence effect of early disclosure. By using a simultaneous equations framework, we attempt to control for the endogeneity problem. This framework also enables us to examine two distinct aspects of the disclosure–litigation relation. Our results are consistent with both the preemption effect and the deterrence effect. First, firms with higher litigation risk are more likely to issue earnings warnings. This relation is robust across various specifications. More interestingly, we also find some evidence that firms that disclose early can lower their expected litigation risk. At a minimum, there is no evidence that earnings warnings trigger litigation, as some prior literature has suggested. Subject to the limitations of our data and methodology described earlier, we believe that our findings provide us with a better understanding of why many firms voluntarily issue earnings warnings. There appears to be little ground for the notion that voluntary disclosure increases the risk of a class-action lawsuit, and there is at least some evidence that disclosure decreases the risk of being sued.