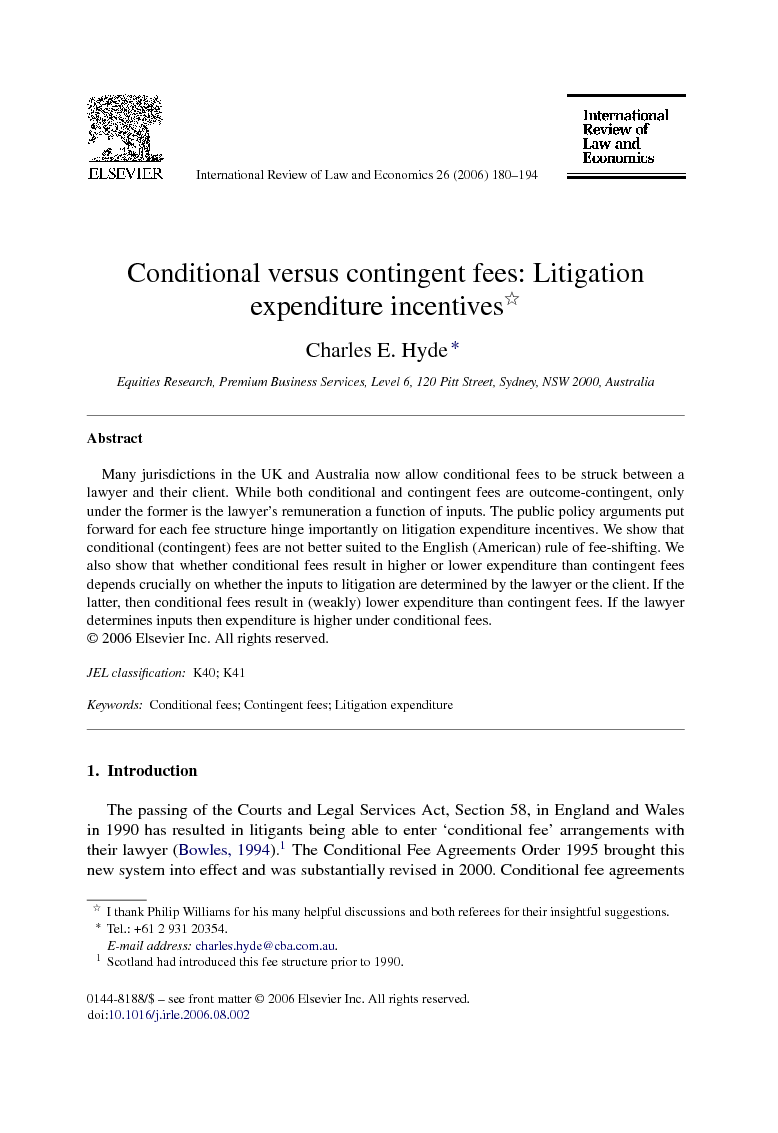 We have compared litigation expenditures under contingent fees to that under conditional fees. We find that while expenditure is always (weakly) higher under a contingent fee if the client controls litigation expenditure, the opposite is true under lawyer-controlled litigation. Also, we show that the ranking of expenditures is always independent of the extent of fee-shifting, regardless of who controls expenditure. A natural direction in which to extend this line of inquiry is to formally model the effect of taxation of costs under the English rule since this is an important mechanism for controlling moral hazard. Indeed, this mechanism may adequately compensate for the shortcomings of conditional fees in correcting for the incentive of lawyers to over-service, thus providing insights into why conditional fees may be an appropriate choice under the English rule but not the American rule of fee-shifting. A more detailed model of how fees are determined in equilibrium, particularly in the lawyer-controlled litigation model, could also increase our understanding of the relative merits of contingent and conditional fees. In particular, it could be useful to formally derive optimal contracts from the client's perspective as in Santore and Viard (1999). Another obvious extension is to incorporate an analysis of how the two fee structures affect the incentives for litigants to reach a pre-trial settlement. Not only are most disputes settled out of court, but also by applying the logic of backwards induction, our analysis of the expenditure incentives at trial (and their effect on each party's perception of winning) provides the necessary foundation for such an analysis. However, in order to proceed, it is necessary to impose additional structure on the legal technology so that the precise magnitude of the expenditures, and hence beliefs, of both litigants can be deduced under the two fee types. In the absence of such structure, our ability to draw conclusions about the effect of each fee on pre-trial settlement is very limited. In fact, it is possible only to conclude that if the expenditure of both parties is higher under fee A than under fee B to the same extent, so that their beliefs are the same under fee A and fee B, then pre-trial settlement is more likely under fee A. This follows since they have the same expected benefit from going to trial under each fee (since their beliefs are unchanged), yet the costs of going to trial are higher under fee A, implying that it is less attractive. Since this is clearly a very restrictive set of conditions, determining the relative effects of the two fee types on pre-trial settlement will necessitate specifying the properties of the legal technology in more detail.