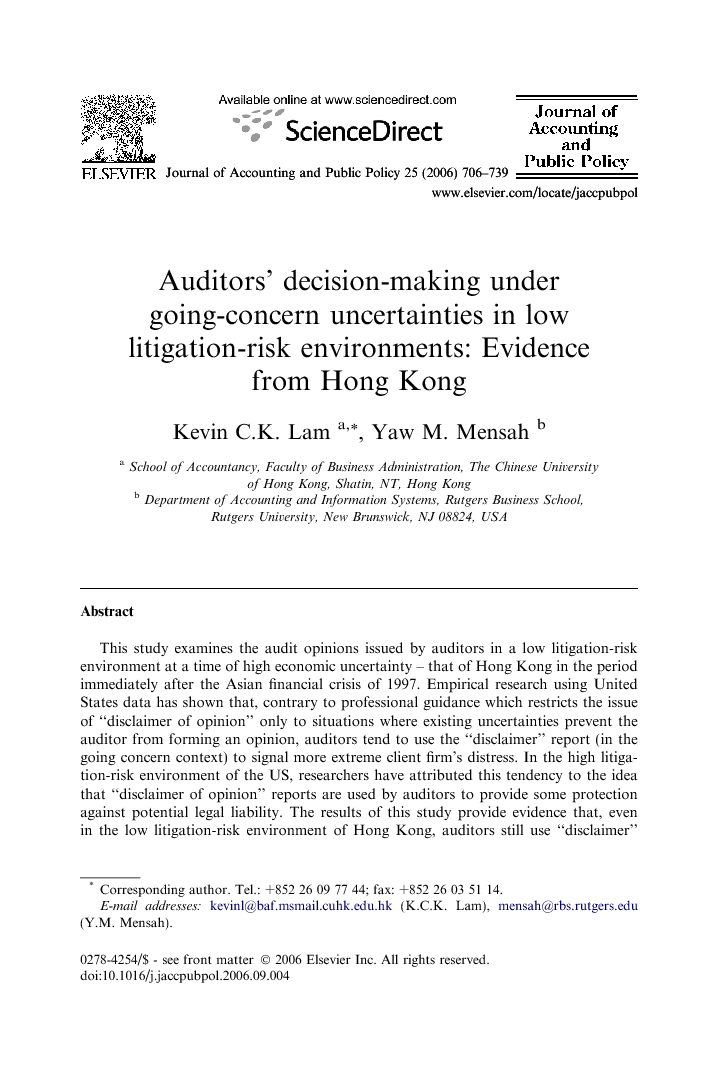 This study examines the audit opinions issued by auditors in a low litigation-risk environment at a time of high economic uncertainty – that of Hong Kong in the period immediately after the Asian financial crisis of 1997. Empirical research using United States data has shown that, contrary to professional guidance which restricts the issue of “disclaimer of opinion” only to situations where existing uncertainties prevent the auditor from forming an opinion, auditors tend to use the “disclaimer” report (in the going concern context) to signal more extreme client firm’s distress. In the high litigation-risk environment of the US, researchers have attributed this tendency to the idea that “disclaimer of opinion” reports are used by auditors to provide some protection against potential legal liability. The results of this study provide evidence that, even in the low litigation-risk environment of Hong Kong, auditors still use “disclaimer” reports to signal more extreme client firm financial distress. Thus, the maintenance of a high litigation-risk environment does not appear to be a necessary pre-requisite for high quality audits.

Although there are several theories relating to what economic role auditing plays, the type of audit opinion issued is presumed to further such a role.1 Specifically, auditors’ choice of modified opinions (e.g. explanatory notes, qualified with “except for”, disclaimer and adverse opinion) can be important because they may convey different warning signals to users of the financial statements.2 Thus, research on what factors influence auditors in arriving at their decision on the type of report (unqualified or some degree of modified opinion) and their predictive value in anticipating the ultimate outcomes are worthwhile. Professional audit guidance in the United States on the appropriate audit reports to issue under going concern uncertainties are governed by Statement of Auditing Standards No. 58 (SAS No. 58) and Statement of Auditing Standards No. 59 (SAS No. 59). In countries following international auditing standards, the relevant ones are International Standards on Auditing No. 200 (ISA 200), and International Standards on Auditing No. 700 (ISA 700).3 Under both the US and international auditing guidelines, the “disclaimer of opinion” is supposed to be issued by auditors only if, due to some inherent limitations of the audit environment, the auditors cannot form an opinion. According to Carmichael and Pany (1993), the Auditing Standards Committee allowed auditors to issue disclaimer of opinions because of the belief that auditors should not be compelled to issue an opinion if they could not, for legitimate reasons, form such an opinion on the financial statements. Despite the apparent intent behind the “disclaimer of opinion” report, empirical evidence provided by LaSalle and Anandarajan, 1996, LaSalle et al., 1996, LaSalle and Anandarajan, 1997 and Anandarajan et al., 2001 indicate that “disclaimers” are often treated (and seen by financial statement users) as part of a continuum of audit opinions that signal greater financial distress.4 Researchers in this area have argued that this movement may have been motivated by the desire of auditors to limit their litigation risk. But if limiting litigation risk were the primary factor driving this behavior, one would expect to see such behavior absent in countries where litigation risks are much lower. The primary purpose of this paper is to propose an alternative explanation for the conversion by auditors of the “disclaimer of opinion” report into a stronger signal of financial distress. The underlying premise of this study is as follows. Auditors are trained professionals who are called upon to exercise judgment and issue audit opinions in very diverse circumstances. These audit opinions are issued in varying regulatory and legal environments, some with more risk to the auditor than in others. If we assume that auditors in developed economies have similar ethical standards and training and apply the same global audit methodologies, their audit opinions even in identical business circumstance may vary due to differences in the regulatory and legal pressures faced. So a study of an environment such as Hong Kong where the regulatory and legal regime is relatively benign to auditors may provide some indication of what could happen in other environments if the regulatory/legal environment were changed. Granted the premise that auditors in Hong Kong have comparable levels of training and professional conditioning as auditors in other advanced economies such as the United States, such a study is useful in and of itself even if it is not a comparative study across different legal/regulatory environments. In the sections which follow, a review of the prior literature is first presented. This is followed by our hypothesis that going concern audit reports in the low litigation-risk environment of Hong Kong can be described as hierarchical. The research design, sample generation and the institutional setting of the study are then presented. The results of the tests for alternative ranking schemes are presented in Section 3, along with some tests of robustness. The empirical evidence on the predictive value of the different types of audit opinions is presented in Section 4, and the conclusions of the paper in the final section.

This study has examined the factors which appear to be related to the auditors’ decision to issue different types of modified opinions (explanatory paragraph, except for qualifications and disclaimers) in the Hong Kong context. Given the low auditor litigation risk in Hong Kong, we have examined whether auditor behavior may be driven by the same factors that previous studies in the high litigation environment of the United States have reported. Our results are generally consistent with the previous findings in the literature that auditor reputation and professionalism greatly influence auditor behavior. We find evidence that auditors tend to issue disclaimers under conditions characterized by greater financial distress, and modified opinions with explanatory paragraphs when the financial conditions are less severe. These findings suggest that litigation risk, even if important in high litigation-risk environments, may not be any more important than the professionalism and reputation of the auditor. We acknowledge the possibility that, since size was not significant in our results but was found to be significant in the US (e.g., Anandarajan et al., 2001), the inference that auditors in the US use their discretion for self-serving purposes may be justified. This result also provides one additional insight. Given the flexibility to issue different types of audit reports, the evidence from Hong Kong suggests that auditors exercise some degree of judgment to signal greater financial distress. Thus, in an environment of low litigation risk, the audit report may convey as much predictive information as in high litigation-risk environments (where the impetus to avoid shareholder and creditor lawsuit may be presumed to provide an extra incentive). This suggests that the maintenance of high litigation risk may not really be necessary for auditors to provide the economic role that auditing plays. It remains for further research to determine if, in an international context, higher litigation risks carry an economic advantage in terms of providing a higher quality of audit service, or whether low litigation risks allow auditors to pursue a higher degree of professionalism.