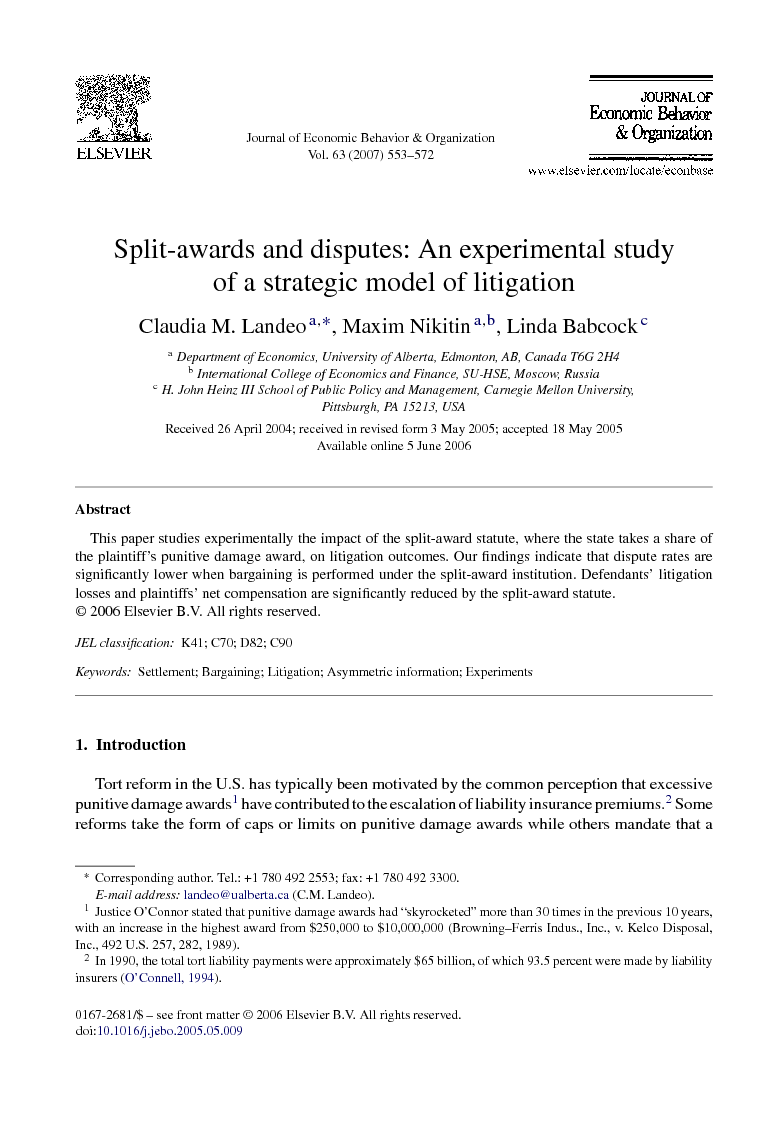 Tort reform in the U.S. has typically been motivated by the common perception that excessive punitive damage awards1 have contributed to the escalation of liability insurance premiums.2 Some reforms take the form of caps or limits on punitive damage awards while others mandate that a portion of the award be allocated to the plaintiff with the remainder going to the state.3 These latter reforms, called “split-awards,” have been implemented in Alaska, California,4 Georgia, Illinois, Indiana, Iowa, Missouri, Oregon, and Utah.5 In addition, New Jersey and Texas have contemplated, but not yet adopted, split-award statutes (White, 2002). Theoretical models of litigation have been developed to study the effects of split-awards on litigants’ behavior and likelihood of trial. However, there are no empirical tests of these models, perhaps because most litigation outcomes are partially or totally unobserved by researchers so that data sources are rarely available (Daughety, 2000). The proposed research is an attempt to test, using experimental methods, the effect of the split-award institution on the likelihood of trial and the level of care chosen by potential injurers. We adopt a simplified version of Landeo and Nikitin's (2005) model as a theoretical framework. Among previous formal studies of the split-award statute is the work of Kahan and Tuckman (1995). They construct a simultaneous-move game between a plaintiff and a defendant and find that, in the absence of agency problems between plaintiffs and lawyers, split-awards reduce the plaintiff's litigation effort and expenses and, consequently, reduce the expected amount paid by the defendant.6 Their framework does not allow for an analysis of the effects of split-awards on the likelihood of trial because the pre-trial bargaining stage is not explicitly modeled. Daughety and Reinganum (2003) examine the effects of the split-award reform on the likelihood of trial and settlement amounts by modeling the pre-trial bargaining as a strategic game of incomplete information between two Bayesian players, an informed defendant7 and an uninformed plaintiff, using signaling and screening games set-ups. They find that holding filing constant, split-award statutes simultaneously lower settlement amounts and the likelihood of trial. Landeo and Nikitin extend the analysis of the split-award reform by exploring its effects not only on litigation outcomes but also on the potential injurer's level of care.8 They construct a strategic model of litigation consisting of two stages. First, there is a potential injurer's optimization stage, where a level of care is chosen by the potential injurer according to its cost of preventing accidents and the expected litigation loss in case of an accident. The level of care determines the probability that an accident occurs. If an accident occurs, a litigation stage begins. It is modeled as a signaling-ultimatum game where two Bayesian risk-neutral parties, an uninformed plaintiff and an informed defendant,9 negotiate prior to a costly trial. Consistent with Daughety and Reinganum, their model predicts that under certain conditions, a decrease in the plaintiff's share of the award decreases the probability of trial. Given that the split-award statute applies only when the case is settled in court, the parties have an incentive to settle out of court in order to cut out the state. In addition, they find that a reduction in the plaintiff's share of the award increases the probability of accidents. This effect arises because a decrease in the plaintiff's share reduces expected litigation costs. The potential injurer reacts to these lower expected costs by reducing expenditures on safety.10 Despite the higher likelihood of accidents under the split-award statute, they find, however, that the overall effect of the reform can be welfare improving if the harm caused by accidents is below some threshold.11 We try here to further Landeo and Nikitin's research by investigating experimentally the effects of the split-award statute institution. In assessing the validity of the qualitative theoretical predictions, our experimental study analyzes the effect of a reduction in the plaintiff's share of punitive award on potential injurer's level of care and litigation outcomes using a two-treatment between-subjects design. This experimental investigation is important for two reasons. First, from a theoretical perspective, these experimental conditions allow us to verify whether the theoretical model has captured the main variables that determine litigation outcomes and level of care choice. Hence, our findings provide information that might contribute to the improvement of game theoretic models of litigation. Second, the theoretical model shows the impact of the split-award statute on reducing the likelihood of dispute but at the expense of increasing the likelihood of accidents (by reducing the potential injurer's level of care). However, this tort reform has not been previously subjected to any experimental or field-testing. Given that data on the process of decision-making of the participants involved in lawsuits are not available or are incomplete, conducting an experiment to evaluate the effects of this litigation institution seems to be a valuable alternative. Our findings indicate that dispute rates are significantly lower when bargaining is performed under the split-award institution. Defendant's litigation expenses and plaintiff's net compensation are significantly reduced by the split-award statute. The examination of subjects’ decisions suggests strategic behavior. The rest of the paper is organized as follows. Section 2 outlines the theoretical model and predictions. Section 3 presents a parameterization of the model. Section 4 describes the experimental design. Section 5 examines the results from the experimental sessions. Section 6 concludes the paper.

This study reports several important findings. In the experiment, the split-award institution affected the likelihood of disputes as predicted by the theoretical model. The dispute rate and total litigation costs were significantly lower under the split-award compared to the no split-award case. Defendants’ litigation losses and plaintiffs’ net compensation were positively and significantly influenced by the split-award institution. Contrary to the theoretical predictions, the experimental results do not suggest a significant difference between the expenditures on care chosen under the two conditions. The significant qualitative effect that the split-award institution had on the observed litigation behavior suggests strategic behavior of the subjects. The examination of the subjects’ decisions also suggests risk-aversion. Our findings provide useful information that can be used to improve game theoretic models of litigation. Directions for future theoretical research include enhancements to the current models to explain the discrepancies we found, perhaps by incorporating non-neutral attitudes toward risk in models of incomplete information and adding some relevant behavioral characteristics of subjects (i.e., the use of heuristics under limited computational abilities) that influence decisions. Our findings stress the importance of combining experimental and behavioral observation with theoretical modeling. Our study shares a weakness in terms of external validity that is common to all laboratory experimental research. Although our experiment cannot predict the effects of the split-award institution on levels of care and settlement in richer environments, this experiment provides a reasonable amount of evidence regarding whether the addition of the split-award institution into the bargaining process we have structured here will have the predicted effects.