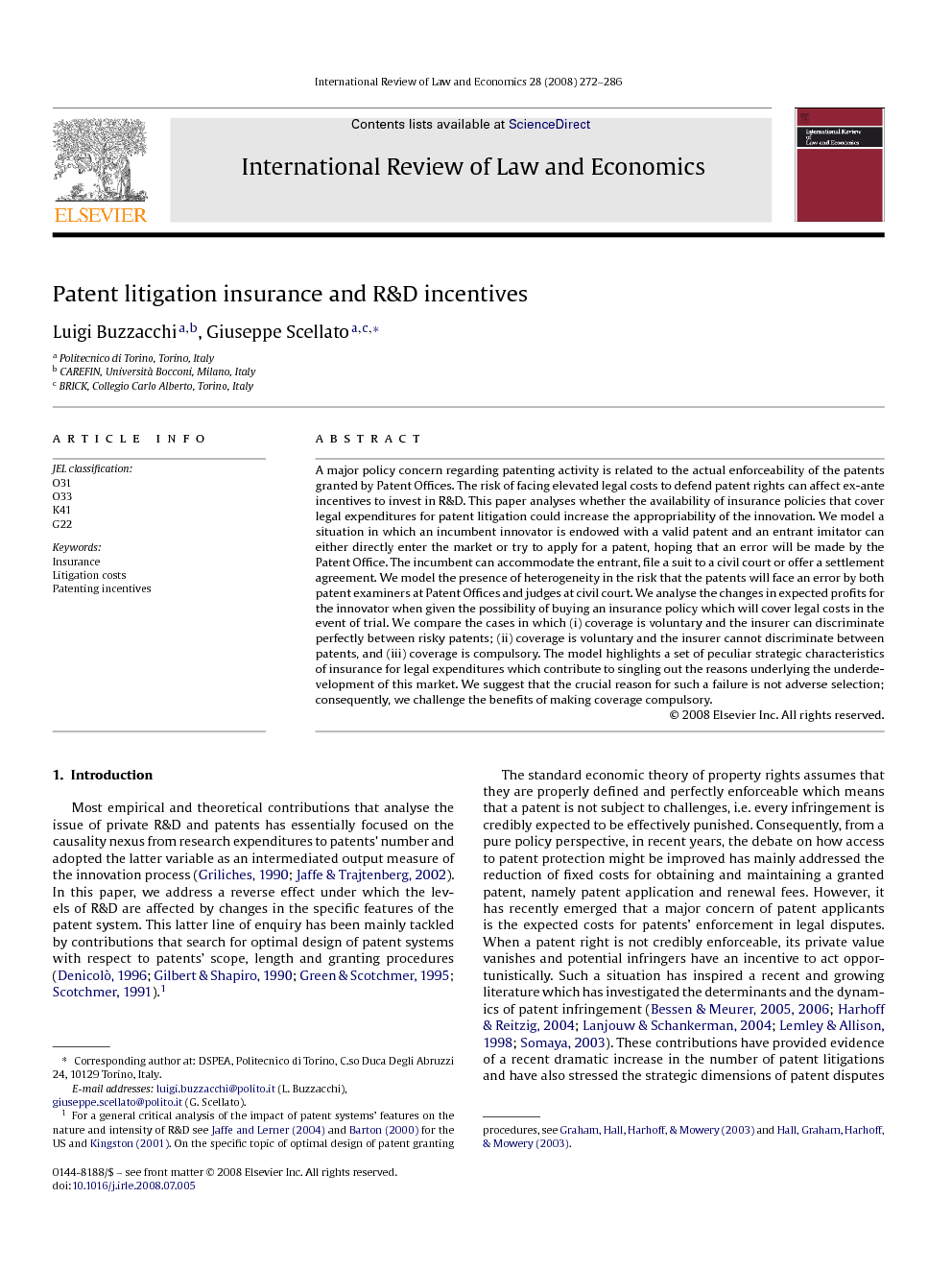 A major policy concern regarding patenting activity is related to the actual enforceability of the patents granted by Patent Offices. The risk of facing elevated legal costs to defend patent rights can affect ex-ante incentives to invest in R&D. This paper analyses whether the availability of insurance policies that cover legal expenditures for patent litigation could increase the appropriability of the innovation. We model a situation in which an incumbent innovator is endowed with a valid patent and an entrant imitator can either directly enter the market or try to apply for a patent, hoping that an error will be made by the Patent Office. The incumbent can accommodate the entrant, file a suit to a civil court or offer a settlement agreement. We model the presence of heterogeneity in the risk that the patents will face an error by both patent examiners at Patent Offices and judges at civil court. We analyse the changes in expected profits for the innovator when given the possibility of buying an insurance policy which will cover legal costs in the event of trial. We compare the cases in which (i) coverage is voluntary and the insurer can discriminate perfectly between risky patents; (ii) coverage is voluntary and the insurer cannot discriminate between patents, and (iii) coverage is compulsory. The model highlights a set of peculiar strategic characteristics of insurance for legal expenditures which contribute to singling out the reasons underlying the underdevelopment of this market. We suggest that the crucial reason for such a failure is not adverse selection; consequently, we challenge the benefits of making coverage compulsory.

Most empirical and theoretical contributions that analyse the issue of private R&D and patents has essentially focused on the causality nexus from research expenditures to patents’ number and adopted the latter variable as an intermediated output measure of the innovation process (Griliches, 1990; Jaffe & Trajtenberg, 2002). In this paper, we address a reverse effect under which the levels of R&D are affected by changes in the specific features of the patent system. This latter line of enquiry has been mainly tackled by contributions that search for optimal design of patent systems with respect to patents’ scope, length and granting procedures (Denicolò, 1996; Gilbert & Shapiro, 1990; Green & Scotchmer, 1995; Scotchmer, 1991).1 The standard economic theory of property rights assumes that they are properly defined and perfectly enforceable which means that a patent is not subject to challenges, i.e. every infringement is credibly expected to be effectively punished. Consequently, from a pure policy perspective, in recent years, the debate on how access to patent protection might be improved has mainly addressed the reduction of fixed costs for obtaining and maintaining a granted patent, namely patent application and renewal fees. However, it has recently emerged that a major concern of patent applicants is the expected costs for patents’ enforcement in legal disputes. When a patent right is not credibly enforceable, its private value vanishes and potential infringers have an incentive to act opportunistically. Such a situation has inspired a recent and growing literature which has investigated the determinants and the dynamics of patent infringement (Bessen and Meurer, 2005 and Bessen and Meurer, 2006; Harhoff & Reitzig, 2004; Lanjouw & Schankerman, 2004; Lemley & Allison, 1998; Somaya, 2003). These contributions have provided evidence of a recent dramatic increase in the number of patent litigations and have also stressed the strategic dimensions of patent disputes which might be detrimental to the pro-innovative objective of the patent system.2 The threat of being involved in a costly and uncertain infringement case, as well as the risk of retaliation, can negatively affect the ex-ante R&D incentive, particularly for less financially endowed companies. The aim of this paper is to analyse and discuss the possible effects of the introduction of insurance schemes specifically dedicated to covering legal expenditures that enforce intellectual property rights. The economic analysis of insurance for legal expenditures reveals a number of special features with respect to the standard theory of insurance. While for the latter, the ultimate objective consists of a transfer of risk that brings greater certainty of outcomes to risk-averse individuals, legal expenditures insurance also has the significant effect of improving the bargaining position of the insured in a legal dispute. While a theoretical analysis, as will be discussed below, recognizes that this kind of insurance policy induces specific behaviour of the disputants which actually increases the appropriability of innovation, empirical evidence witnesses a clear underdevelopment of the market for this kind of insurance that calls for reflection on the determinants of market failure. On institutional grounds, these market failures are mainly attributed to the presence of adverse selection and insurers therefore claim the need to introduce compulsory schemes to solve the problem (EU Report, 2006). In this paper, we argue that the latter interpretation and the related policy interventions are incomplete since even in the presence of symmetric information, the insurance market for the provision of legal expenditures coverage in the event of patent litigation shows peculiar forms of failure. Our analysis aims at addressing these issues by developing a model in which an incumbent innovator, endowed with a valid patent, can buy offensive insurance that will cover future legal costs. The innovator is subject to the risk of facing an imitator who can either directly enter the market or try to apply for a patent and then enter the market. The decision to include the latter entry strategy in the model builds on recent evidence (Harhoff & Reitzig, 2004; Lanjouw & Schankerman, 2001) which stresses the non-negligible incidence of allegedly patents eventually revoked after patent oppositions, both in Europe and the US. We first analyse the change in expected profits of the innovator given the possibility – or obligation – of buying an insurance policy for legal expenditures provided by a competitive insurance market. This approach implies that our measure for evaluating the impact of the insurance is confined to dynamic efficiency as long as higher appropriability of the innovation is reasonably expected to induce higher ex-ante R&D investments.3 Secondly, we discuss how changes in the expected profits of the innovator are affected by market power in the insurance industry and by the rules governing punitive damages imposed by civil courts. The paper is organized as follows. In Section 2, we present a brief review of empirical contributions on the patent litigation phenomenon. The section also shows the main characteristics of the insurance policies for patent litigation expenditures and provides data on the market. In Section 3, we present a model to illustrate the strategic behaviour of innovators and infringers when no insurance for legal costs is available (Section 3.1), and when this coverage is available and optional (Section 3.2) or compulsory (Section 3.3). Finally, in Section 4, we discuss the main results and draw possible policy implications.

In this paper, we have analysed the effects exerted by insurance policies which cover legal expenditures in disputes involving patent rights. The presence of this coverage is expected to increase the private value of innovations and consequently to favour ex-ante R&D investments by deterring the entry of imitators. While there has recently been large consensus among patent attorneys concerning the usefulness of this kind of insurance scheme, the response from the insurance industry has been very limited. Both in the US and Europe, only patent-specific and very expensive policies are presently provided. Given this situation, we have tried to identify the specific characteristics of this kind of policy which might have caused their limited development in the insurance industry and whether compulsoriness is likely to solve potential market failures. The model in which we have assumed risk neutral companies and insurers with perfect discrimination capability, highlights the peculiar nature of legal cost insurance schemes whose value is strictly related to strategic issues. We show that the strategic value of the insurance is related to the possibility of deterring entry by imitators, making litigation more credible, and increasing the bargaining power in the event of settlement. The most interesting result concerns the fact that, even in a context of perfect discrimination and competitive insurance market, only a sub sample of innovators would find it profitable to acquire the insurance. In particular, when the ‘technological opacity’ (i.e. the probability of facing an error by the Patent Office or by the civil court) is sufficiently high or low, the strategic effect of a policy that covers legal costs is null or too expensive. This ‘paradoxical’ evidence indicates that the insurance is only purchased when it loses its traditional actuarial role: in the interval in which companies find it profitable to acquire the insurance, no trial is filed or, in other words, losses never occur for the insurer. Hence, the insurance only has economic value as a commitment device. Such a result is not affected by introducing risk aversion in the modelling framework. After the discussion of perfect discrimination, we have removed this hypothesis in order to ascertain whether adverse selection introduces new specific failures in the insurance market. We conclude that the significant market failures of this sector cannot be attributed to asymmetric information related to the degree of opacity of the innovation. Consequently, we argue that introducing mandatory coverage for all granted patents will not contribute to making innovation more appropriable. We suggest that a more efficient substitute for this underdeveloped market could be represented by interventions that are aimed at raising the screening ability of the Patent Office, together with a proper level of punitive damages.