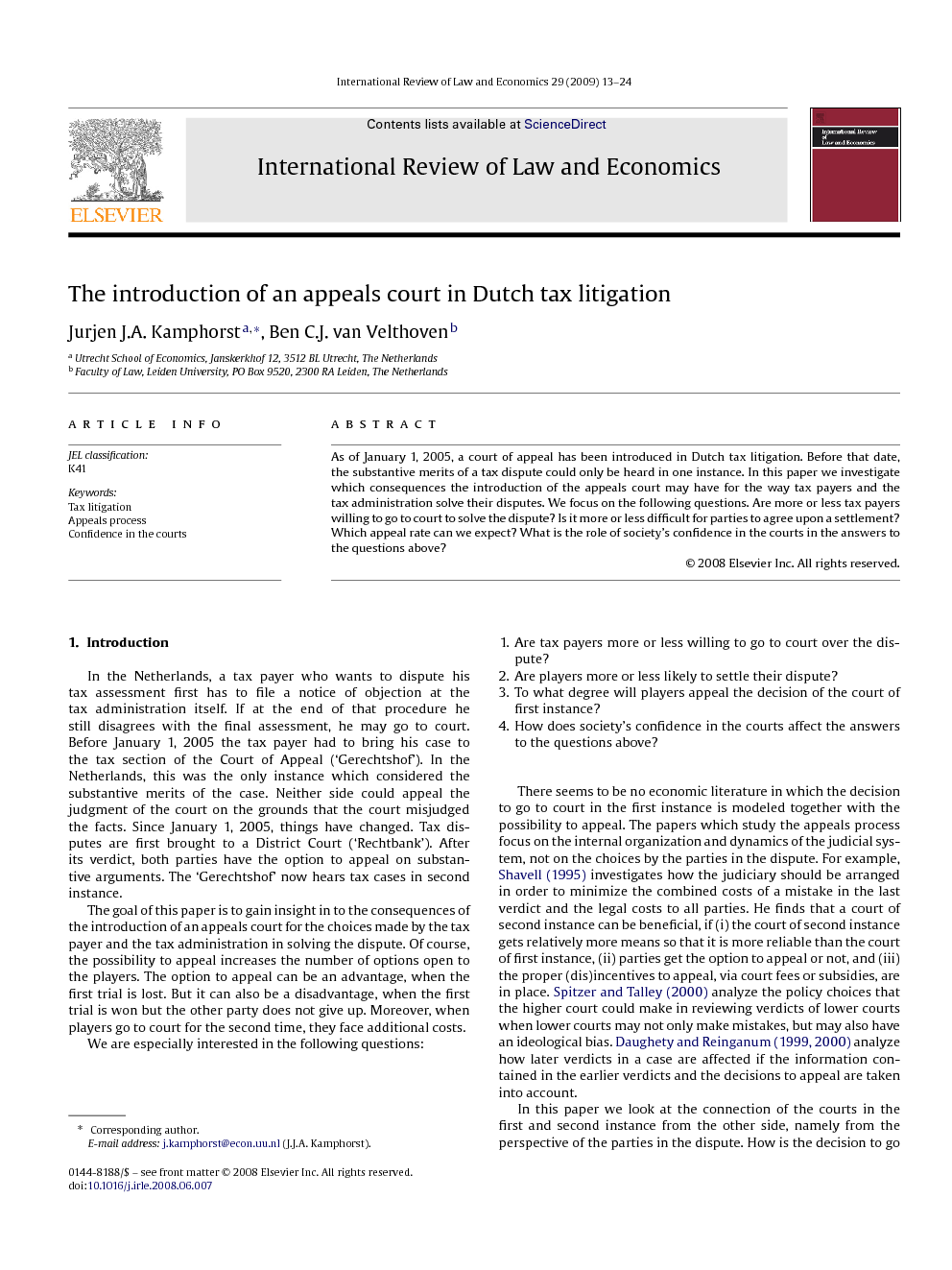 As of January 1, 2005, a court of appeal has been introduced in Dutch tax litigation. Before that date, the substantive merits of a tax dispute could only be heard in one instance. In this paper we investigate which consequences the introduction of the appeals court may have for the way tax payers and the tax administration solve their disputes. We focus on the following questions. Are more or less tax payers willing to go to court to solve the dispute? Is it more or less difficult for parties to agree upon a settlement? Which appeal rate can we expect? What is the role of society's confidence in the courts in the answers to the questions above?

In the Netherlands, a tax payer who wants to dispute his tax assessment first has to file a notice of objection at the tax administration itself. If at the end of that procedure he still disagrees with the final assessment, he may go to court. Before January 1, 2005 the tax payer had to bring his case to the tax section of the Court of Appeal (‘Gerechtshof’). In the Netherlands, this was the only instance which considered the substantive merits of the case. Neither side could appeal the judgment of the court on the grounds that the court misjudged the facts. Since January 1, 2005, things have changed. Tax disputes are first brought to a District Court (‘Rechtbank’). After its verdict, both parties have the option to appeal on substantive arguments. The ‘Gerechtshof’ now hears tax cases in second instance. The goal of this paper is to gain insight in to the consequences of the introduction of an appeals court for the choices made by the tax payer and the tax administration in solving the dispute. Of course, the possibility to appeal increases the number of options open to the players. The option to appeal can be an advantage, when the first trial is lost. But it can also be a disadvantage, when the first trial is won but the other party does not give up. Moreover, when players go to court for the second time, they face additional costs. We are especially interested in the following questions: 1. Are tax payers more or less willing to go to court over the dispute? 2. Are players more or less likely to settle their dispute? 3. To what degree will players appeal the decision of the court of first instance? 4. How does society's confidence in the courts affect the answers to the questions above? There seems to be no economic literature in which the decision to go to court in the first instance is modeled together with the possibility to appeal. The papers which study the appeals process focus on the internal organization and dynamics of the judicial system, not on the choices by the parties in the dispute. For example, Shavell (1995) investigates how the judiciary should be arranged in order to minimize the combined costs of a mistake in the last verdict and the legal costs to all parties. He finds that a court of second instance can be beneficial, if (i) the court of second instance gets relatively more means so that it is more reliable than the court of first instance, (ii) parties get the option to appeal or not, and (iii) the proper (dis)incentives to appeal, via court fees or subsidies, are in place. Spitzer and Talley (2000) analyze the policy choices that the higher court could make in reviewing verdicts of lower courts when lower courts may not only make mistakes, but may also have an ideological bias. Daughety and Reinganum, 1999 and Daughety and Reinganum, 2000 analyze how later verdicts in a case are affected if the information contained in the earlier verdicts and the decisions to appeal are taken into account. In this paper we look at the connection of the courts in the first and second instance from the other side, namely from the perspective of the parties in the dispute. How is the decision to go to a court of first instance affected if players may appeal its verdict? The paper is organized as follows. In Section 2 we introduce the general set-up of the model. Section 3 briefly discusses the old situation in which no appeal was possible. Sections 4 and 5 analyze how the new situation differs from the old one. We will see how the outcomes are affected if players learn about their chances in the court of second instance from the verdict in first instance. We also discuss the role of society's confidence in the courts. Section 6 summarizes the results and draws attention to some relevant aspects that have yet to be built into the model.