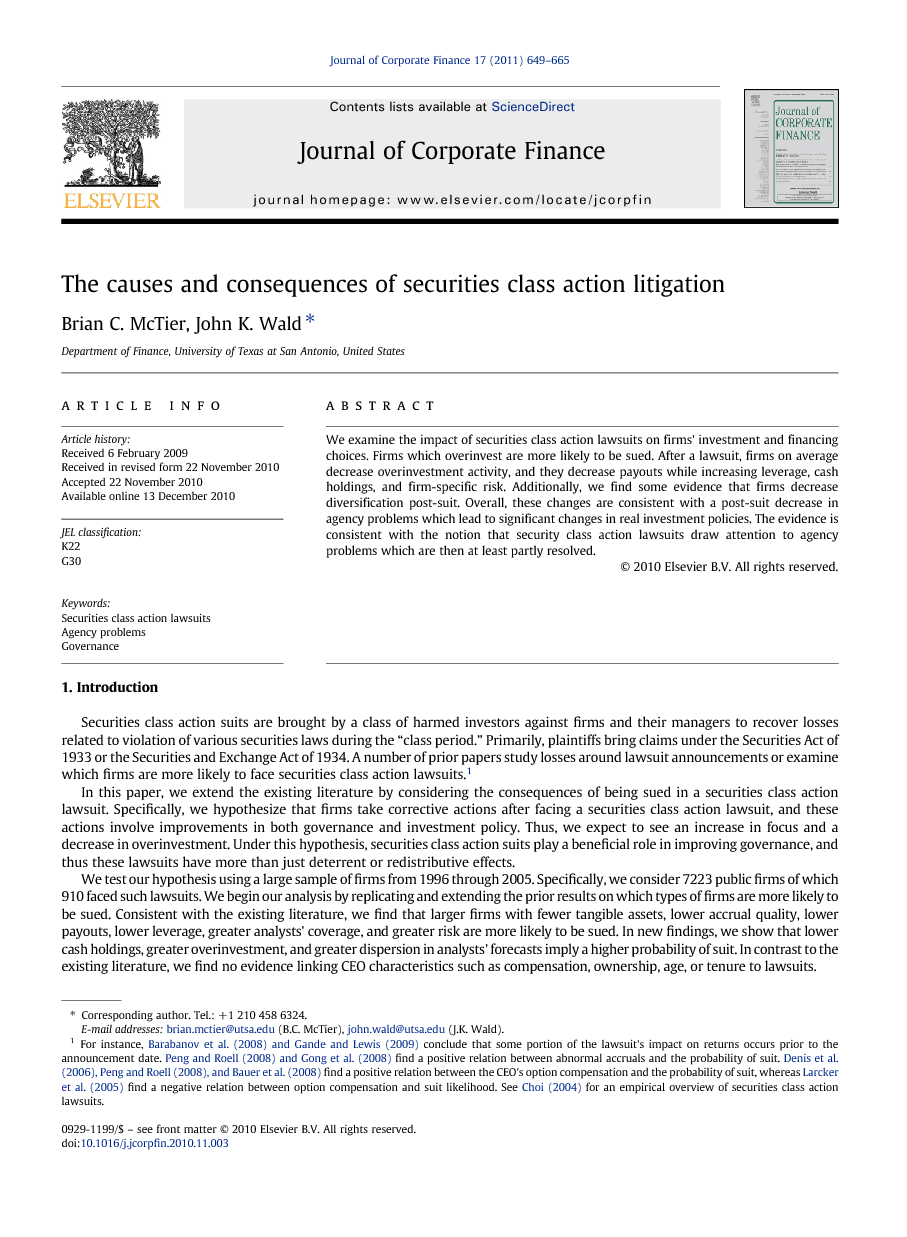 We examine the impact of securities class action lawsuits on firms' investment and financing choices. Firms which overinvest are more likely to be sued. After a lawsuit, firms on average decrease overinvestment activity, and they decrease payouts while increasing leverage, cash holdings, and firm-specific risk. Additionally, we find some evidence that firms decrease diversification post-suit. Overall, these changes are consistent with a post-suit decrease in agency problems which lead to significant changes in real investment policies. The evidence is consistent with the notion that security class action lawsuits draw attention to agency problems which are then at least partly resolved.

Securities class action suits are brought by a class of harmed investors against firms and their managers to recover losses related to violation of various securities laws during the “class period.” Primarily, plaintiffs bring claims under the Securities Act of 1933 or the Securities and Exchange Act of 1934. A number of prior papers study losses around lawsuit announcements or examine which firms are more likely to face securities class action lawsuits.1 In this paper, we extend the existing literature by considering the consequences of being sued in a securities class action lawsuit. Specifically, we hypothesize that firms take corrective actions after facing a securities class action lawsuit, and these actions involve improvements in both governance and investment policy. Thus, we expect to see an increase in focus and a decrease in overinvestment. Under this hypothesis, securities class action suits play a beneficial role in improving governance, and thus these lawsuits have more than just deterrent or redistributive effects. We test our hypothesis using a large sample of firms from 1996 through 2005. Specifically, we consider 7223 public firms of which 910 faced such lawsuits. We begin our analysis by replicating and extending the prior results on which types of firms are more likely to be sued. Consistent with the existing literature, we find that larger firms with fewer tangible assets, lower accrual quality, lower payouts, lower leverage, greater analysts' coverage, and greater risk are more likely to be sued. In new findings, we show that lower cash holdings, greater overinvestment, and greater dispersion in analysts' forecasts imply a higher probability of suit. In contrast to the existing literature, we find no evidence linking CEO characteristics such as compensation, ownership, age, or tenure to lawsuits. More importantly, our study focuses on the real consequences of being sued. After being sued, firms are more likely to increase cash holdings and leverage while decreasing overinvestment and payouts to shareholders. As we show, these changes in cash holdings are much larger than what the firms pay in the suit, and thus they do not just reflect the accumulation of cash to fund expected suit damages. Instead, the change to greater cash holdings is consistent with improved governance as suggested by Harford et al. (2008), while reduced overinvestment and a change from shareholder payouts to leverage is consistent with greater managerial constraints (Jensen, 1986). We also find evidence that idiosyncratic risk increases post-suit, consistent with increased focus and, following the argument of Morck et al. (2000), suggesting more firm-specific information revelation. Consistent with Denis et al. (1997), we also find that post-suit managers reduce diversification slightly. These changes are consistent with improved monitoring, managerial bonding, and focus, and suggest a reduction in manager–owner agency costs. In related work, Strahan (1998) shows that firms sued in securities class action lawsuits are more likely to replace their CEOs; a result we also replicate. However, we show that even if the CEO is not replaced, the various effects we document, such as a decline in firm overinvestment, still hold. Similarly, Ferris et al. (2007) find improvements in the board of directors, including an increase in the proportion of external directors, following a derivative lawsuit. Our results are consistent with security class action lawsuits not only leading to management or director changes, but also to changes in investment and financing policies. Thus, while there is evidence that some lawsuits are caused by legal rent-seeking, our analysis shows that on average firms change investment and financing policies in ways which are consistent with reduced agency problems post-suit. In addition, for a subsample of firms from 1998 and 1999, we examine whether these corrective actions occur only if the firm pays out in the lawsuit. Our evidence is that both firms that made payouts and those that did not have decreases in overinvestment; thus the improvements are not necessarily tied to the outcome of the suit. Instead, the changes are consistent with firms improving policies as these lawsuits focus attention on potential agency problems. Strahan (1998) proposes two hypotheses to categorize suits: legal rent-seeking and manager/owner agency problems. According to the rent-seeking hypothesis, opportunistic plaintiffs' attorneys sue firms that experience large stock price drops essentially to expropriate a settlement from the firm's directors and officers (D&O) liability insurance policies. Beck and Bhagat (1997) summarize the opinions of contemporaneous writers from the business press and experts testifying before Congress and write: “litigation is largely frivolous in that attorneys target firms with highly volatile stock return histories” (p. 577). Baker and Griffith (2009) provide evidence that “the vast majority” (p. 7) of securities class action suits settle at or slightly over the insured limit. They infer from these results that the suits neither adequately compensate investor losses nor deter management behavior. According to the manager/owner agency hypothesis, securities class action suits are motivated by agency problems, and they place a cost on managerial malfeasance. In this framework, securities laws, and the reputational consequences of being sued, act to ensure firm's duties to owner/investors, similar to Akerlof's (1970) concept of certification. However, the broad notion that securities class action suits are related to agency problems can lead to two separate implications: suits can play a positive role because they deter bad actions or because, post-suit, firms are more likely to clean-up poor practices. Consistent with the first of these explanations, Becht et al., 2003 and Bauer et al., 2008 posit that shareholder suits act as a disciplinary force on managers. DuCharme et al. (2004) argue that companies are deterred from reporting false signals about their earnings because the reputational consequences of lawsuits make it more difficult to raise external capital in the future. This study instead focuses on examining the firm's corrective actions post-suit and how these changes are visible in measures of real investment, cash holdings, payouts, and risk.2 Section 2 discusses our data and method. Section 3 presents a brief analysis of the causes of class action lawsuits, while section 4 provides our analysis of the consequences of these suits. Section 5 concludes.

We examine the causes and consequences of shareholder class action suits. We hypothesize that firms take corrective actions after facing a securities class action lawsuit, and these actions involve improvements in both governance and investment policy. We find that firms which overinvest are more likely to be sued. Post-suit, firms on average decrease overinvestment. This decrease coincides with increases in cash holdings, decreases in payouts, and increases in leverage. Overall, our evidence is consistent with a decrease in agency problems and an increase in bonding the firm's cash flows to stakeholders. Moreover, these changes do not appear to be due to the firm holding cash to payout the suit, as, for a small subsample, we find that these changes are visible even in firms that had no payout whatsoever. Instead, they are consistent with increased attention to agency issues initiated by the lawsuit. Additionally, we find that firms decrease diversification and increase idiosyncratic risk post-suit. These findings suggest greater firm focus and better information quality after these lawsuits. Our findings suggest that both rent-seeking and managerial agency problems may explain which firms are more likely to be sued. However, the significant post-suit changes in real activities we document are consistent with corrective improvements in governance and reductions in agency costs. Thus, lawsuits appear to have more than just deterrent or redistributive effects; on average these lawsuits appear to change firm behavior towards better governance, greater focus, and lower overinvestment.