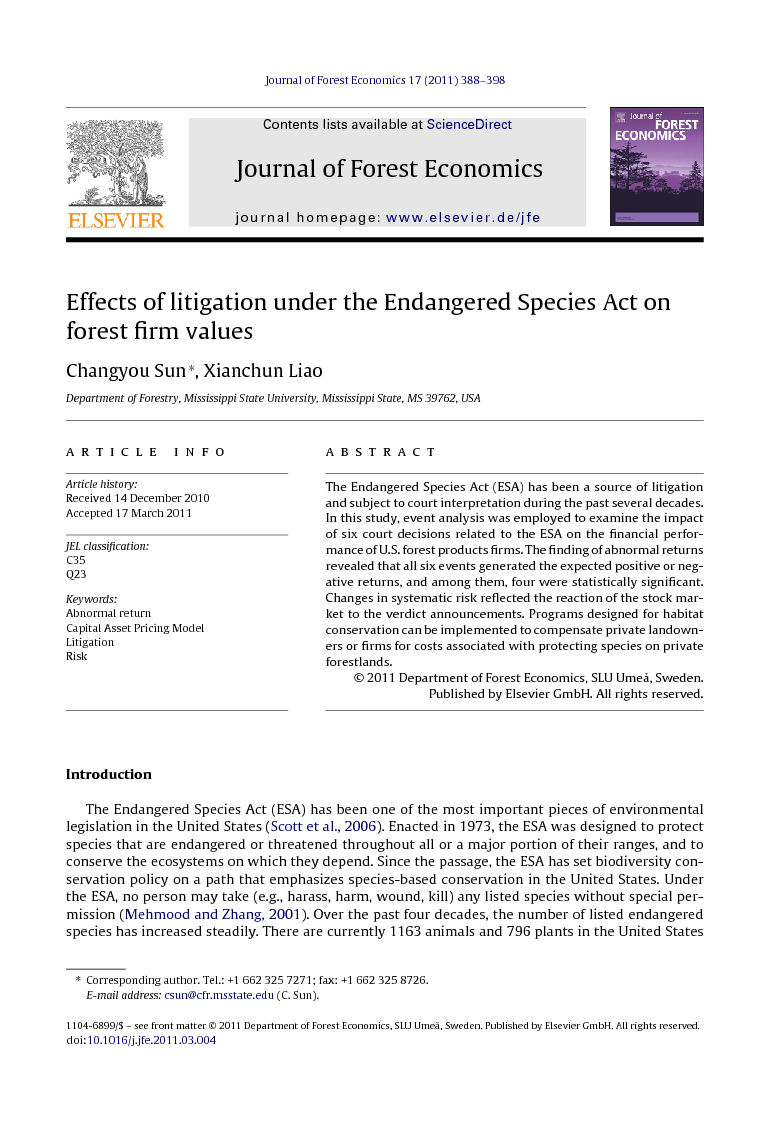 The Endangered Species Act (ESA) has been a source of litigation and subject to court interpretation during the past several decades. In this study, event analysis was employed to examine the impact of six court decisions related to the ESA on the financial performance of U.S. forest products firms. The finding of abnormal returns revealed that all six events generated the expected positive or negative returns, and among them, four were statistically significant. Changes in systematic risk reflected the reaction of the stock market to the verdict announcements. Programs designed for habitat conservation can be implemented to compensate private landowners or firms for costs associated with protecting species on private forestlands.

The Endangered Species Act (ESA) has been one of the most important pieces of environmental legislation in the United States (Scott et al., 2006). Enacted in 1973, the ESA was designed to protect species that are endangered or threatened throughout all or a major portion of their ranges, and to conserve the ecosystems on which they depend. Since the passage, the ESA has set biodiversity conservation policy on a path that emphasizes species-based conservation in the United States. Under the ESA, no person may take (e.g., harass, harm, wound, kill) any listed species without special permission (Mehmood and Zhang, 2001). Over the past four decades, the number of listed endangered species has increased steadily. There are currently 1163 animals and 796 plants in the United States listed as endangered or threatened species on the Web site of U.S. Fish and Wildlife Service (U.S. FWS, 2010). Approximately 40% of the listed species are estimated to have populations that are stable or improving. To date, over 10 species have fully recovered so they were delisted. The ESA has been at the center of debates of how to balance environment protection and economic development for years. At the time of passage, most people were not aware that the law would raise questions over such a broad range of economic activities, e.g., irrigation and dam building, mining, and timber harvesting. Over the past several decades, the ESA has been used to initiate numerous lawsuits and in some regions it has resulted in severe restrictions on land management activities and uses. In particular, since forestlands are the primary habitat for many listed species, both public and private forest landowners have faced increasing uncertainties in managing their lands and harvesting timber. Public forest management agencies and forest products firms have been the primary target of environmental groups seeking protection of endangered and threatened species through the ESA. They own a large portion of forestlands in the United States. In 2002, the public (e.g., U.S. Forest Service) owned 29% of total forestlands, forest products firms owned 13%, and nonindustrial private forest landowners owned 58%; and they accounted for 8%, 29%, and 63% of the timber harvested in the United States, respectively (Smith et al., 2004). Most of the public forestlands in the United States are located in the West. The protection of the northern spotted owl in the Pacific Northwest resulted in at least a 70% reduction in timber harvesting from public forestlands in the region since 1989 (Murray and Wear, 1998). Many forest products firms have been publicly traded and vertically integrated with both forestlands and manufacturing facilities. Environmental protection has generated constant pressure on these firms to maintain profitability and manage green images simultaneously. Forest products firms that are publicly traded can be influenced not only by lawsuits in which they are directly involved, but also by court decisions on other firms in the industry. Environmental groups often identify a species and initiate a lawsuit with the objective of winning the litigation and establishing a precedent for other firms. As a result of this leverage strategy and spillover effect, verdicts from influential lawsuits can have larger spatial and temporal consequences. For example, protection of spotted owl in the West since 1989 has generated great pressure on both industrial and nonindustrial private forest landowners in the South because of the existence of the red-cockaded woodpecker in the region (Zhang and Flick, 2001). Southern landowners have been anxious about how to protect this and other listed species, and at the same time, to achieve sustainable growth of their forests and businesses. Past studies have analyzed the impact of environment regulations and related events on the financial performance of forest products firms. Event analysis has been a widely used tool to address these concerns because of its power in exploring linkages between events and firm values. MacKinlay (1997) and Binder (1998) provided an extensive review of the event analysis literature. In general, event analysis has been used to examine security price behavior as affected by events such as accounting rule changes, earnings announcements, changes in regulation, and money supply announcements. Application of the method in forest economics has also been increasing (e.g., Zhang and Binkley, 1995, Rucker et al., 2005 and Niquidet, 2008). In particular, Rucker et al. (2005) utilized event analysis techniques to develop a distributional event response model which analyzed the effect of ESA cases on lumber futures prices. Events identified in Rucker et al. (2005) were litigation verdicts related to the ESA on public lands. There is, however, a need to examine the impact of ESA-related litigation events involving private forestlands on the financial performance of forest products firms. The objective of this study was to examine the effect of court decisions related to the ESA on financial returns and risks for forest products firms in the United States. Six cases decided after 1990 were selected to represent lawsuits initiated under the ESA and related to forest management activities on private forestlands. Event analysis was employed to measure abnormal returns and risk changes for a group of forest products firms. Fourteen publicly traded forest firms were selected to represent the forest products industry. Event analysis was conducted for each case. In addition, a number of event windows were attempted in evaluating the range of the impacts. The main results were that the forest products firms did respond to court decisions with varying abnormal returns and risk changes. This revealed that protecting endangered and threatened species on forestlands could be costly for the entire forest products sector. Government programs need to be developed to provide landowners subsidies or partially offset their costs.

This study employed event analysis to assess the impacts of court decisions related to the Endangered Species Act and private forestlands on the financial performance of forest products firms. Six ESA-related cases covering private forestlands were identified from the legal database of LexisNexis, and these cases were used as events in the analysis. Fourteen forest products firms were included to represent the forest products industry. Abnormal returns and risk changes for these companies were calculated and compared by case and event window. In evaluating the abnormal returns for the firms as a group, all six events generated expected positive or negative returns with four events having significant estimated impacts. The largest negative abnormal return was −3.124% for case VI when using a 9-day event window. The largest positive return was 6.002% for case V with a 13-day window. The risk analysis also provided estimates of risk changes. For some of the cases, the abnormal returns were insignificant or the risk estimates lacked any clear pattern. Possible explanations for this are that some verdicts may have been expected well in advance of the actual verdict date so there were no surprises to the capital markets. The impacts of these cases also might have been overshadowed by other events occurring at the same time but not considered in this event analysis. Alternatively, relative to the entire forest products industry, some events may have been too small to generate a consistent pattern of impacts on the financial performance of these firms. Overall, we found that positive abnormal returns and reductions in systematic risk of the forest products firms were associated with court decisions favorable to forest firms while opposite results were observed for unfavorable verdicts. The findings of this study have both economic and policy implications for improving environmental quality and promoting sustainable economic growth on forestlands. The responses of capital markets for different litigation verdicts confirm that protecting endangered and threatened species on forestlands can be costly. How to develop programs that provide landowners subsidies or partially offset their costs will continue to be a key to the implementation of the Endangered Species Act. At present, various Habitat Conservation Plans and Safe Harbor Agreements have been developed to address the economic costs and related issues (U.S. FWS, 2010). In addition, forest landowners affected by endangered species can apply for permits designed to be consistent with species conservation. These include incidental take permits, enhancement of survival permits, and recovery and interstate commerce permits. It should be noted that there has been increasing divestiture of forestlands by vertically integrated firms over the past two decades. Primary factors for selling forestlands include poor shareholder returns, debt reduction, tax considerations, and decreased insurance value of internal timber supplies (Yin et al., 1998). Among the last of the large industrial landowners, Weyerhaeuser decided to convert itself into a real estate investment trust in February 2010. In most cases, the large forest products firms have sold their forestlands but retained long-term timber supply agreements with buyers. An interesting question is whether environmental protections on forestlands will continue to impact these forest firms if they no longer own the land. The issue of forest certification may shed some light on this question. In promoting forest certification, environmental groups have utilized the linkage along the timber supply chain (Sasser, 2003). For example, as one of the major lumber retailers in the United States, Home Depot does not own and manage forestlands directly. However, under the pressure of environmental groups, Home Depot was among the first to make a commitment to forest certification in the early 1990s. Therefore, if a forest products firm as a timber user is public and identifiable in the market, it appears likely that environmental protections provided to forestlands may still have some impacts on its financial performance. In summary, the outcomes from this study revealed that litigation under the Endangered Species Act and related to private forestlands has resulted in impacts on the financial performance of firms in the forest products industry. Institutional timberland ownership has now reached a new level, following a decade or more of the vertically integrated forest products firms divesting themselves of their timberlands. Further studies will be needed to examine how institutional owners will face the challenges associated with environmental regulations in managing their forestlands, and additionally, how the downstream forest products firms with much smaller forestland ownership will behave.