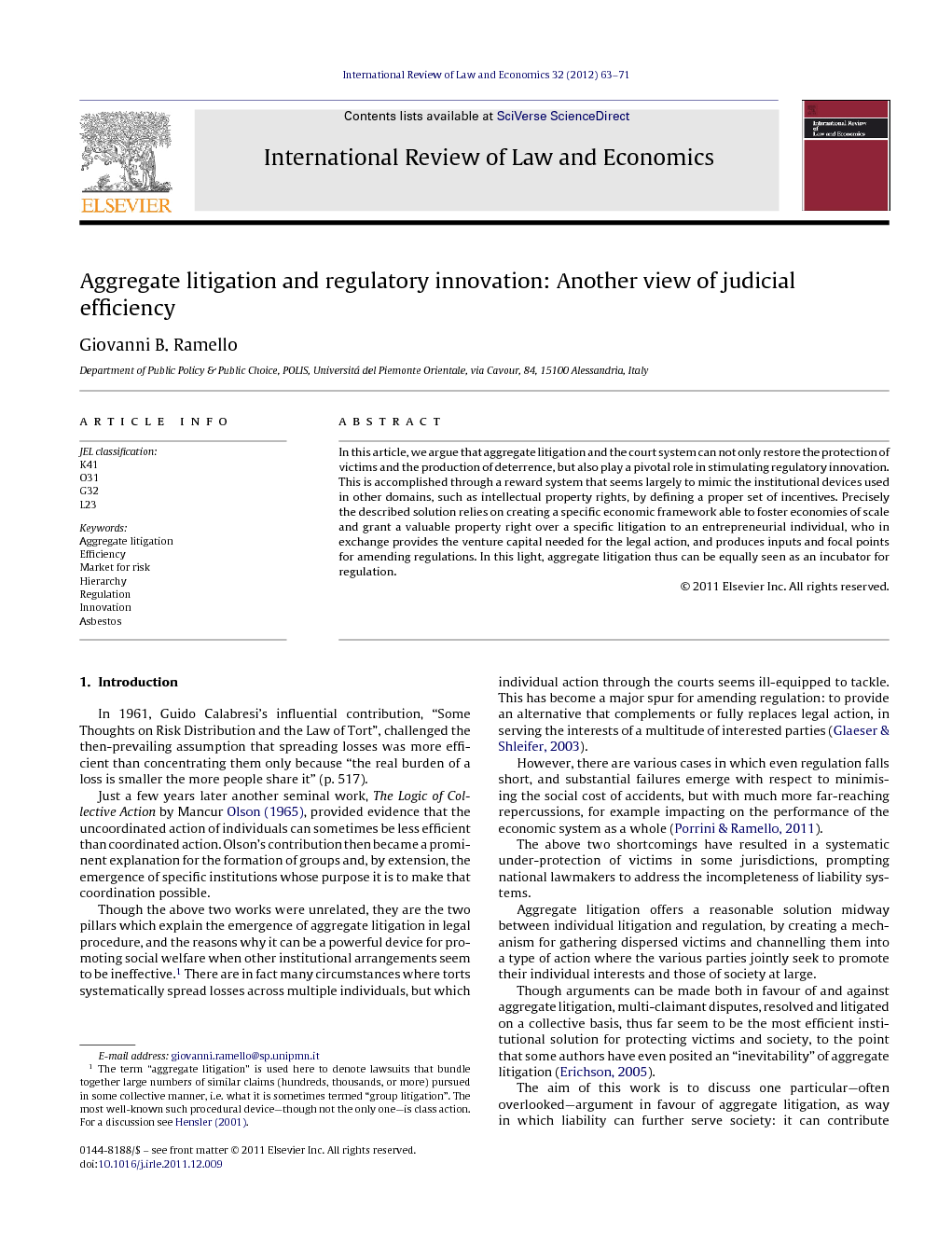 In this article, we argue that aggregate litigation and the court system can not only restore the protection of victims and the production of deterrence, but also play a pivotal role in stimulating regulatory innovation. This is accomplished through a reward system that seems largely to mimic the institutional devices used in other domains, such as intellectual property rights, by defining a proper set of incentives. Precisely the described solution relies on creating a specific economic framework able to foster economies of scale and grant a valuable property right over a specific litigation to an entrepreneurial individual, who in exchange provides the venture capital needed for the legal action, and produces inputs and focal points for amending regulations. In this light, aggregate litigation thus can be equally seen as an incubator for regulation.

In 1961, Guido Calabresi's influential contribution, “Some Thoughts on Risk Distribution and the Law of Tort”, challenged the then-prevailing assumption that spreading losses was more efficient than concentrating them only because “the real burden of a loss is smaller the more people share it” (p. 517). Just a few years later another seminal work, The Logic of Collective Action by Mancur Olson (1965), provided evidence that the uncoordinated action of individuals can sometimes be less efficient than coordinated action. Olson's contribution then became a prominent explanation for the formation of groups and, by extension, the emergence of specific institutions whose purpose it is to make that coordination possible. Though the above two works were unrelated, they are the two pillars which explain the emergence of aggregate litigation in legal procedure, and the reasons why it can be a powerful device for promoting social welfare when other institutional arrangements seem to be ineffective.1 There are in fact many circumstances where torts systematically spread losses across multiple individuals, but which individual action through the courts seems ill-equipped to tackle. This has become a major spur for amending regulation: to provide an alternative that complements or fully replaces legal action, in serving the interests of a multitude of interested parties (Glaeser & Shleifer, 2003). However, there are various cases in which even regulation falls short, and substantial failures emerge with respect to minimising the social cost of accidents, but with much more far-reaching repercussions, for example impacting on the performance of the economic system as a whole (Porrini & Ramello, 2011). The above two shortcomings have resulted in a systematic under-protection of victims in some jurisdictions, prompting national lawmakers to address the incompleteness of liability systems. Aggregate litigation offers a reasonable solution midway between individual litigation and regulation, by creating a mechanism for gathering dispersed victims and channelling them into a type of action where the various parties jointly seek to promote their individual interests and those of society at large. Though arguments can be made both in favour of and against aggregate litigation, multi-claimant disputes, resolved and litigated on a collective basis, thus far seem to be the most efficient institutional solution for protecting victims and society, to the point that some authors have even posited an “inevitability” of aggregate litigation (Erichson, 2005). The aim of this work is to discuss one particular—often overlooked—argument in favour of aggregate litigation, as way in which liability can further serve society: it can contribute significantly to regulatory innovation, by producing a set of outputs that, taken together, supply focal points and inputs to the regulatory rule-making process, which is in many cases fossilised by structural rigidity. In this respect, therefore, aggregate litigation can help avert future regulatory failures. It can thus be regarded as an alternative judicial market technology that transforms the lawsuit into a “regulation incubator”—a field experiment for ascertaining the necessity of change, and the ability of the proposed solutions to meet real-world needs, also thanks to the large number of plaintiffs who become a proxy for society. Viewed in this light, aggregate litigation also pursues the goal of dynamic efficiency, by providing incentives that foster innovation, similarly to what happens, for example, with intellectual property rights. The article is organised as follows: Section 2 uses the asbestos saga as an example of how aggregate litigation can promote regulatory change, whilst Section 3 further examines the nature and limitations of regulation and its rule-making process; Section 4 considers the different relationships that exist between regulation and litigation, discussing how aggregate litigation can become instrumental to regulatory innovation; Section 5 sketches out the rationale of aggregate litigation, discussing how this procedural solution is becoming significant in the tort system, whilst Section 6 disentangles the workings of the reward system set up by aggregate litigation, to determine the conditions under which this solution is superior to the alternatives for fostering innovation (but also for protecting victims); finally, Section 7 draws the conclusions.

The current failure of individual civil action and regulation in certain jurisdictions has called attention to alternative systems for protecting victims’ rights and producing deterrence of harmful behaviour. One practicable solution to this two-fold failure is aggregate litigation, which offers an array of organisational solutions designed to reinstate the functionality of the tort system. This suggests that the judicial market is comparable to any other productive activity, and that organisation can offer a solution to the problem of collective action also in the case of litigation. There is in fact no special reason why a ‘one size fits all’ solution, which can never be found in most human and economic activities, should instead exist in the case of liability. After all, the court system does not merely administer “justice” but also produces goods and allocates rights, and from this perspective aggregate litigation can be seen as an alternative organisational solution better able to promote efficiency when other institutions fail to do so. In this article, we have argued that aggregate litigation can not only restore the production of victims’ compensation and deterrence, but also plays a pivotal role in stimulating regulatory innovation. This is accomplished through a reward system that seems largely to mimic the institutional devices used in other domains, such as intellectual property rights, by defining a proper set of incentives. These incentives then make it possible to pursue the additional goal of dynamic efficiency. The described system relies on creating a specific economic framework, able to foster economies of scale and grant a valuable property right over a specific litigation to an entrepreneurial individual, who in exchange provides the venture capital needed for the legal action, and produces useful inputs for amending regulations. In this light, aggregate litigation thus serves as an incubator for regulation, making it possible to comprehensively surmount the traditional rigidities that hamper administrative agencies, thereby facilitating regulatory change.