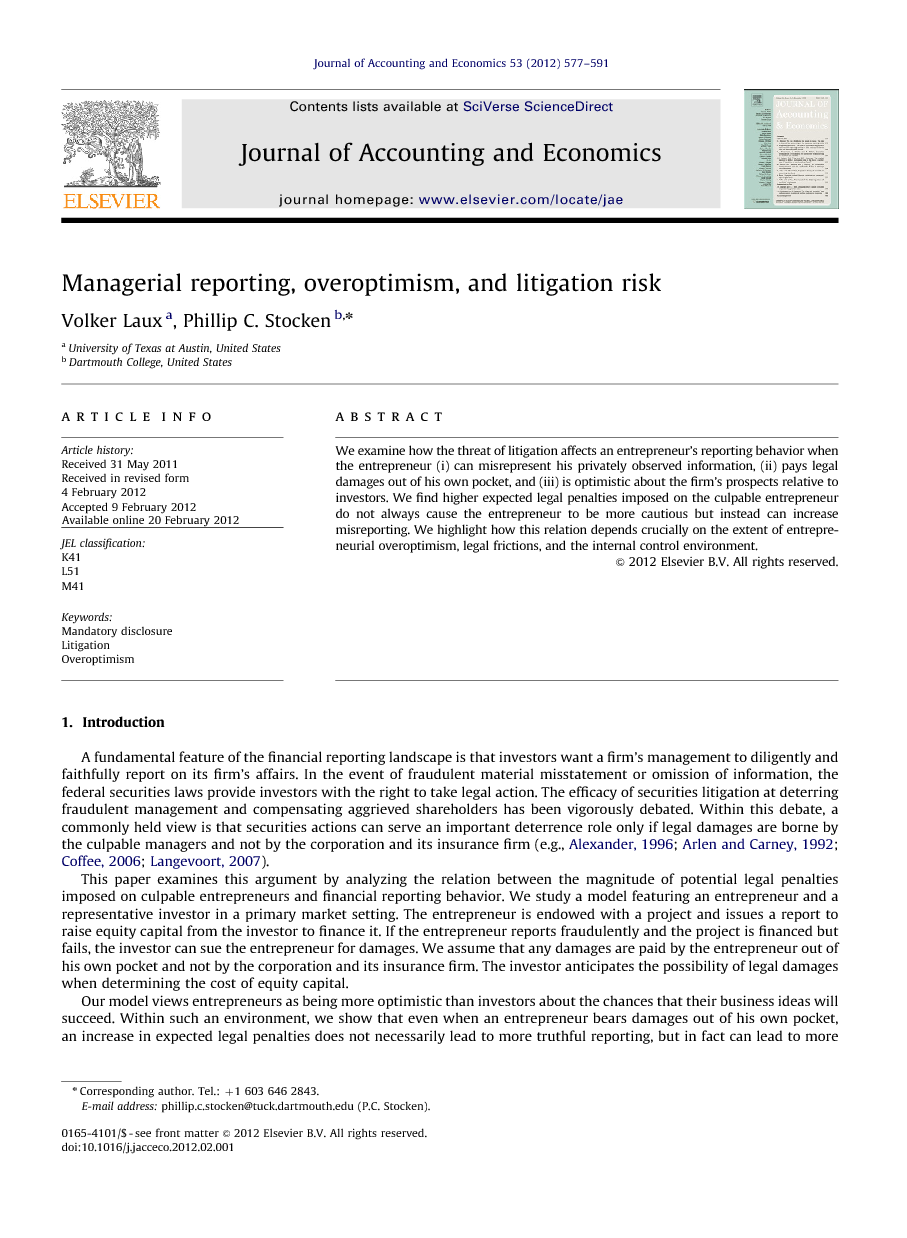 We examine how the threat of litigation affects an entrepreneur's reporting behavior when the entrepreneur (i) can misrepresent his privately observed information, (ii) pays legal damages out of his own pocket, and (iii) is optimistic about the firm's prospects relative to investors. We find higher expected legal penalties imposed on the culpable entrepreneur do not always cause the entrepreneur to be more cautious but instead can increase misreporting. We highlight how this relation depends crucially on the extent of entrepreneurial overoptimism, legal frictions, and the internal control environment.

The efficacy of securities litigation at deterring fraudulent financial reporting and compensating shareholders has long been the subject of debate. This debate seems to have precipitated several legal reforms, including provisions in the Private Securities Litigation Reform Act of 1995 and the Sarbanes-Oxley Act of 2002. While there is concern that the current securities laws fail as a deterrent because damages are typically paid by the corporation and its insurance firm, there is general agreement that personal liability imposed on the culpable managers is effective in deterring accounting fraud (e.g., Alexander, 1996, Coffee, 2006 and Langevoort, 2007). By incorporating important descriptive features of the institutional environment—namely, entrepreneurial optimism, legal frictions, and the internal control system—into a model of managerial reporting, we offer a nuanced characterization of the effects of personal liability on the entrepreneur's reporting behavior. We show that increased liability does not always reduce and, in fact, can exacerbate incentives for misreporting. Specifically, we establish that an increase in expected legal damages is associated with an increase in the frequency of misreporting when: the entrepreneur is exuberant relative to investors about the firm's prospects; litigation frictions are relatively low; and, the internal control system is relatively weak. In light of the subtle relation between legal penalties and fraudulent managerial reporting, we highlight issues policy-makers and regulators might consider as they further reform the litigation environment and implement key provisions of the Dodd-Frank Wall Street Reform and Consumer Protection Act of 2010. We also formalize some novel predictions about firm reporting behavior that await empirical testing.