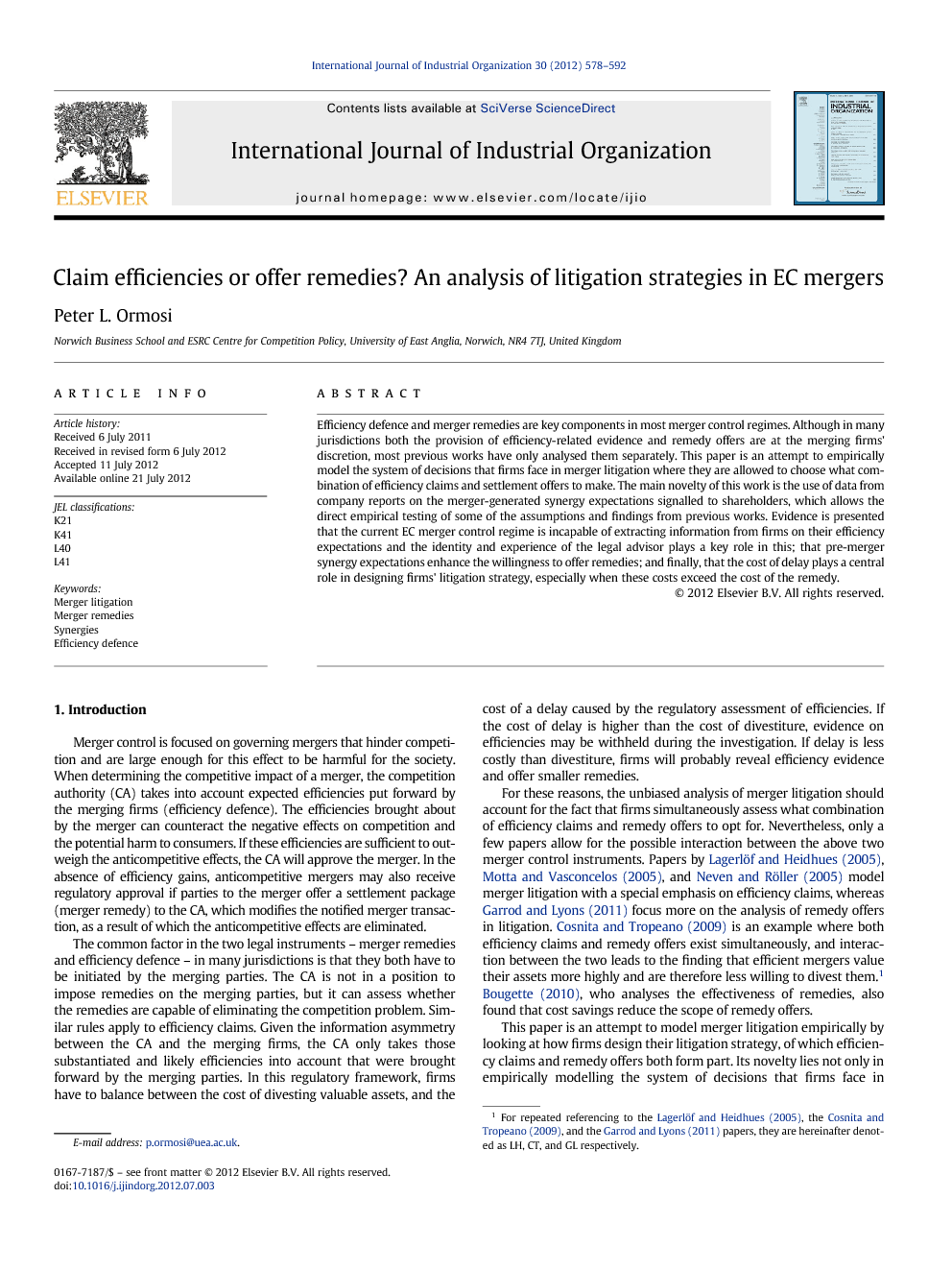 Efficiency defence and merger remedies are key components in most merger control regimes. Although in many jurisdictions both the provision of efficiency-related evidence and remedy offers are at the merging firms' discretion, most previous works have only analysed them separately. This paper is an attempt to empirically model the system of decisions that firms face in merger litigation where they are allowed to choose what combination of efficiency claims and settlement offers to make. The main novelty of this work is the use of data from company reports on the merger-generated synergy expectations signalled to shareholders, which allows the direct empirical testing of some of the assumptions and findings from previous works. Evidence is presented that the current EC merger control regime is incapable of extracting information from firms on their efficiency expectations and the identity and experience of the legal advisor plays a key role in this; that pre-merger synergy expectations enhance the willingness to offer remedies; and finally, that the cost of delay plays a central role in designing firms' litigation strategy, especially when these costs exceed the cost of the remedy.

The paper gave an empirical analysis of merging firms' litigation strategy. It was shown that the current EC merger control regime is incapable of extracting information from firms on their efficiency expectations and the experience of the legal advisor in the case plays an important role in this. Firms that expect their merger to generate efficiency gains are more likely to make upfront remedy offers. Efficiency claims (valid or false) made to the Commission reduce the size of the remedy offer, however false efficiency claims may be distinguished by looking at the timing of the remedy offer. Cost of delay plays a central role in designing firms' litigation strategy, especially when these costs exceed the cost of the remedy. Mergers with high cost of delay refrain from efficiency defence and offer early and large first remedies. Some of the findings of this paper may have implications beyond merger control. For example, the importance of the experience of the legal advisor in any type of litigation bargaining setting should deserve more academic attention as it is likely to play an important role. Similarly, the seemingly different attitude of US and EU law firms would also be worth further exploring. The paper provides supporting evidence to general bargaining literature that settlement is reached early if the cost of delay is sufficiently high. An open question for future research in a somewhat broader context is how much of these findings are due to managerial opportunism, especially given the high level of information asymmetry on issues such as the efficiency impact of a merger, or the true value of a divested asset. A few points are also raised for the policymaker. Firstly, given the potential for rent seeking that results in making false efficiency claims, it should be considered whether a procedural fine should be introduced for sanctioning outright false efficiency-evidence. Secondly, as a result of the current practice even efficient firms refrain from making efficiency claims and they offer remedies instead, leading to potential type I errors in EC merger control. And finally, better incentives to reveal efficiency-evidence should be introduced, for example by requiring the Commission to make sure that remedies are tailored to take efficiency-gains into account. In a more general context, in any regulatory situation where firms have the discretion to withhold evidence and make settlement offers, regulators need better tools for extracting information that is important for deciding on the welfare implications of a behaviour.