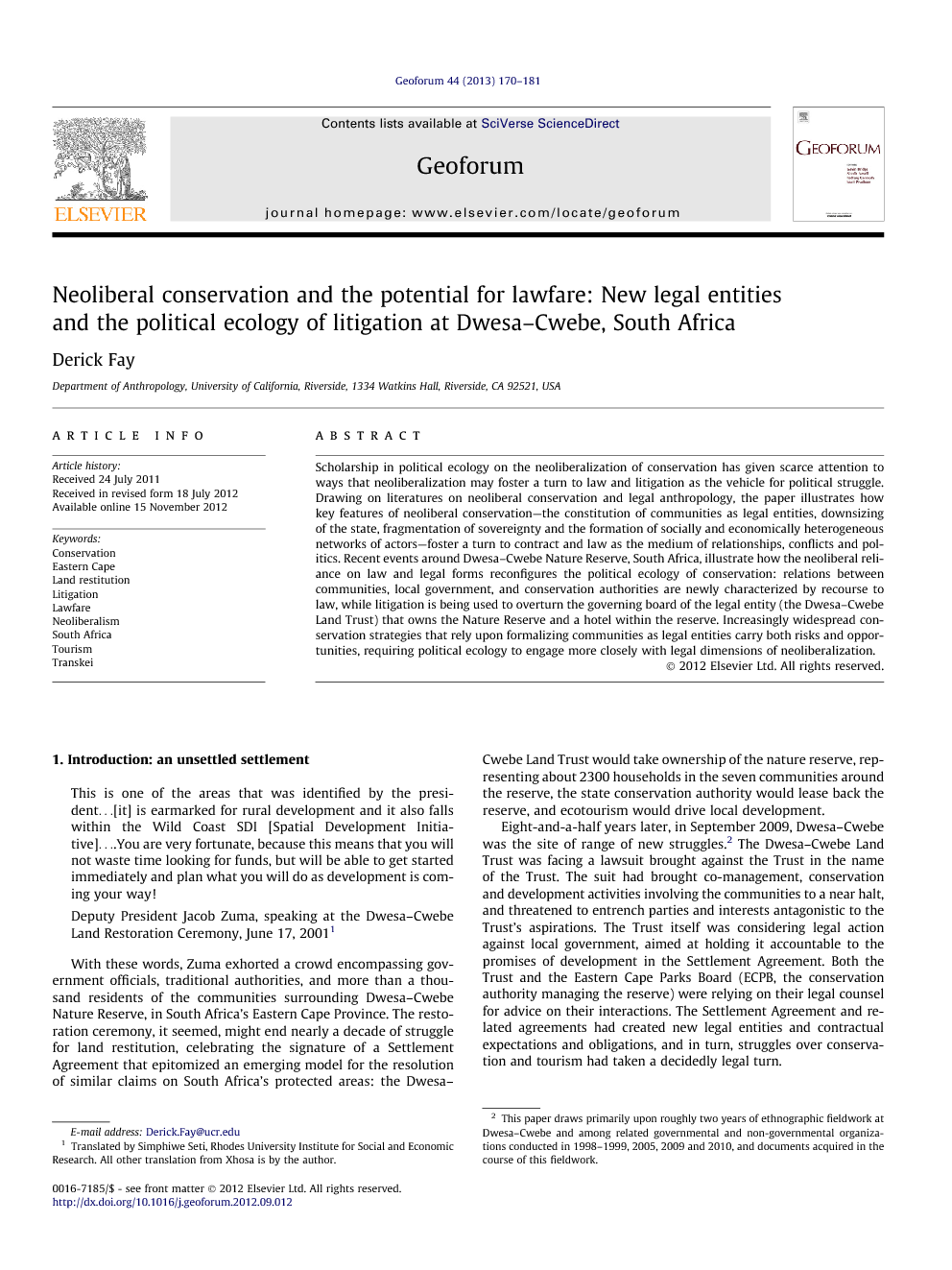 Scholarship in political ecology on the neoliberalization of conservation has given scarce attention to ways that neoliberalization may foster a turn to law and litigation as the vehicle for political struggle. Drawing on literatures on neoliberal conservation and legal anthropology, the paper illustrates how key features of neoliberal conservation—the constitution of communities as legal entities, downsizing of the state, fragmentation of sovereignty and the formation of socially and economically heterogeneous networks of actors—foster a turn to contract and law as the medium of relationships, conflicts and politics. Recent events around Dwesa–Cwebe Nature Reserve, South Africa, illustrate how the neoliberal reliance on law and legal forms reconfigures the political ecology of conservation: relations between communities, local government, and conservation authorities are newly characterized by recourse to law, while litigation is being used to overturn the governing board of the legal entity (the Dwesa–Cwebe Land Trust) that owns the Nature Reserve and a hotel within the reserve. Increasingly widespread conservation strategies that rely upon formalizing communities as legal entities carry both risks and opportunities, requiring political ecology to engage more closely with legal dimensions of neoliberalization.

This is one of the areas that was identified by the president…[it] is earmarked for rural development and it also falls within the Wild Coast SDI [Spatial Development Initiative]….You are very fortunate, because this means that you will not waste time looking for funds, but will be able to get started immediately and plan what you will do as development is coming your way! Deputy President Jacob Zuma, speaking at the Dwesa–Cwebe Land Restoration Ceremony, June 17, 20011 With these words, Zuma exhorted a crowd encompassing government officials, traditional authorities, and more than a thousand residents of the communities surrounding Dwesa–Cwebe Nature Reserve, in South Africa’s Eastern Cape Province. The restoration ceremony, it seemed, might end nearly a decade of struggle for land restitution, celebrating the signature of a Settlement Agreement that epitomized an emerging model for the resolution of similar claims on South Africa’s protected areas: the Dwesa–Cwebe Land Trust would take ownership of the nature reserve, representing about 2300 households in the seven communities around the reserve, the state conservation authority would lease back the reserve, and ecotourism would drive local development. Eight-and-a-half years later, in September 2009, Dwesa–Cwebe was the site of range of new struggles.2 The Dwesa–Cwebe Land Trust was facing a lawsuit brought against the Trust in the name of the Trust. The suit had brought co-management, conservation and development activities involving the communities to a near halt, and threatened to entrench parties and interests antagonistic to the Trust’s aspirations. The Trust itself was considering legal action against local government, aimed at holding it accountable to the promises of development in the Settlement Agreement. Both the Trust and the Eastern Cape Parks Board (ECPB, the conservation authority managing the reserve) were relying on their legal counsel for advice on their interactions. The Settlement Agreement and related agreements had created new legal entities and contractual expectations and obligations, and in turn, struggles over conservation and tourism had taken a decidedly legal turn. An analysis of recent events at Dwesa–Cwebe could join a number of studies of land restitution in South Africa and elsewhere that emphasize the challenges of the period following the formal resolution of claims.3 My argument here, though, is a more general one: the neoliberalization of conservation entails processes and creates situations that foster a turn to the law as a vehicle for political struggle. Existing works on the relations between neoliberalism and conservation and the environment (e.g. Sullivan, 2006; Igoe and Brockington, 2007, Brockington et al., 2008 and Heynen et al., 2007) have identified some of these processes and situations, but have generally not recognized that these have corollaries that, following Comaroff and Comaroff, 2006, Comaroff and Comaroff, 2009a and Comaroff and Comaroff, 2009b, may channel political struggles into legal forms. Understanding the ways in which neoliberal conservation may lead to the deployment of the law, both to benefit and subvert communities affected by conservation will both equip political ecology to better grasp the changing forms and consequences of struggles over conservation and tourism, and inform understandings of the variety, mobility, and potential uses of neoliberal policies and techniques of government (cf. Ferguson, 2010). I develop this argument drawing on analyses of neoliberal conservation by Igoe and Brockington (2007; cf. Sullivan, 2006), and of the relationships between neoliberalism and legalization in the writings of Comaroff and Comaroff, 2006, Comaroff and Comaroff, 2009a and Comaroff and Comaroff, 2009b. I have chosen to focus on these authors’ works out of the range of relevant literature not only because of the ways their works immediately spoke to conditions at Dwesa–Cwebe as I sought to make sense of this recent turn to legal struggle, but because of their clarity and relevance to one another, highlighting four processes and situations that link their analyses: the transfer of property to new legal structures representing “communities,” the contraction of many aspects of the state, the fragmentation of sovereignty among diverse state and non-state actors, and the creation of new contractually-based relationships to enable action across lines of difference. All of these, I argue, give rise to conditions where a turn to law and litigation is likely to be increasingly important in the political ecology of conservation. The recent history of Dwesa–Cwebe, including the 2001 Settlement Agreement, and the emergence of the recent legal struggles illustrate how these very local struggles reflect the working out of more general processes and trends. The conclusion reflects on the implications of these trends in the light of processes and policy trends, including “rights-based conservation” (Campese, 2009, Lawlor and Huberman, 2009 and Painter, 2009), that rely upon constituting communities as legal entities for benefit allocation and compensation. If, as many observers hailed it at the time, the Dwesa–Cwebe Settlement Agreement was a model for the reconciliation of land restitution, conservation and development, it may also be a harbinger of the future form of politics and “lawfare”—“the resort to legal instruments…to commit acts of political coercion” (Comaroff and Comaroff, 2006, p. 30) around protected areas in the context of neoliberal conservation. Here as elsewhere, the law is a double-edged sword; it may strengthen the rights of conservation-affected communities, but also create the potential for novel forms of dispossession.