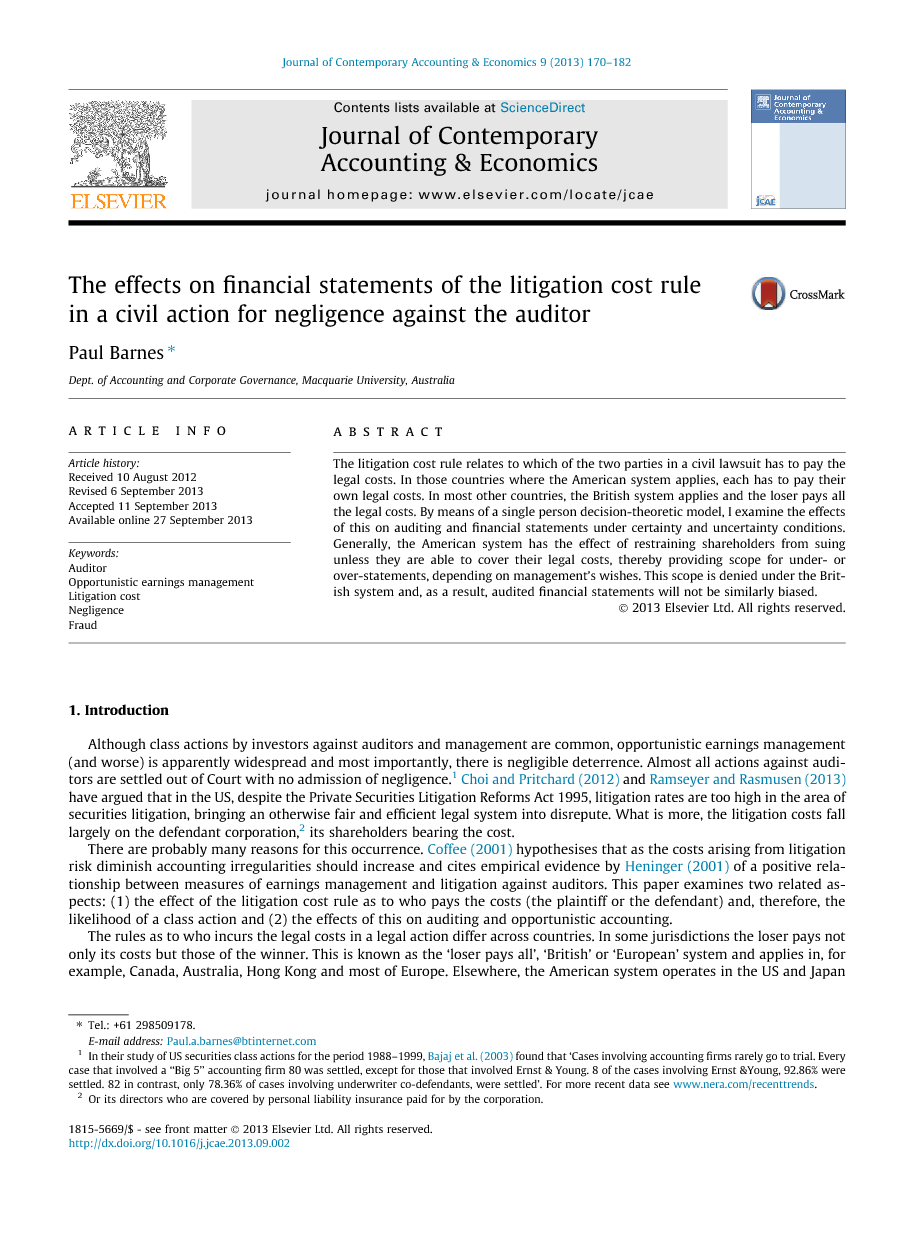 The litigation cost rule relates to which of the two parties in a civil lawsuit has to pay the legal costs. In those countries where the American system applies, each has to pay their own legal costs. In most other countries, the British system applies and the loser pays all the legal costs. By means of a single person decision-theoretic model, I examine the effects of this on auditing and financial statements under certainty and uncertainty conditions. Generally, the American system has the effect of restraining shareholders from suing unless they are able to cover their legal costs, thereby providing scope for under- or over-statements, depending on management’s wishes. This scope is denied under the British system and, as a result, audited financial statements will not be similarly biased.

Although class actions by investors against auditors and management are common, opportunistic earnings management (and worse) is apparently widespread and most importantly, there is negligible deterrence. Almost all actions against auditors are settled out of Court with no admission of negligence.1Choi and Pritchard (2012) and Ramseyer and Rasmusen (2013) have argued that in the US, despite the Private Securities Litigation Reforms Act 1995, litigation rates are too high in the area of securities litigation, bringing an otherwise fair and efficient legal system into disrepute. What is more, the litigation costs fall largely on the defendant corporation,2 its shareholders bearing the cost. There are probably many reasons for this occurrence. Coffee (2001) hypothesises that as the costs arising from litigation risk diminish accounting irregularities should increase and cites empirical evidence by Heninger (2001) of a positive relationship between measures of earnings management and litigation against auditors. This paper examines two related aspects: (1) the effect of the litigation cost rule as to who pays the costs (the plaintiff or the defendant) and, therefore, the likelihood of a class action and (2) the effects of this on auditing and opportunistic accounting. The rules as to who incurs the legal costs in a legal action differ across countries. In some jurisdictions the loser pays not only its costs but those of the winner. This is known as the ‘loser pays all’, ‘British’ or ‘European’ system and applies in, for example, Canada, Australia, Hong Kong and most of Europe. Elsewhere, the American system operates in the US and Japan and, to a less extent, in China,3 where each party pays its own legal fees irrespective of who wins. As a result, the American system creates significant ‘transaction costs’ for the winner (which may or may not be significant), whereas the British system does not. The purpose of this paper is to investigate whether litigation costs and the litigation cost rule affect the financial statements and contribute to a bias in financial statements when the differences in opinion between management and auditor are sufficiently large as to affect the implied value of the corporation. In other words, Type II errors: when the auditor accepts financial statements that are materially misstated. An important and obvious constraint on the auditor’s decision is the possibility of the shareholders as a class (or another party adversely affected) pursuing an action for negligence against it for misleading financial statements. If they win the action, they will have to pay their own costs under the American system. Therefore, they will only consider action if the expected damages are likely to exceed the costs incurred in bringing the action. Under the British system, as long as they win, they will incur no costs. Therefore, they are free to sue whatever the value of the damages. The paper is arranged as follows. In Section 2, I review the literature on which the analysis is based. In Section 3, I examine the costs and benefits arising to the auditor relating to disagreements with management in the context of a single-person decision theoretic model. I show that, in the absence of transaction costs for the plaintiff under the British system (if it wins) the auditor will act independently and, as a result, audited financial statements are unlikely to be biased. In Section 4, I introduce legal costs arising to the plaintiff from a legal action against the auditor for negligence (the American system). I show that not only do these create scope but provide an incentive for bias, although it is unclear how large the size of the bias is. In Section 5, I discuss some of the implications of this analysis in practice. In Section 6, I relax the certainty assumption and examine how asymmetric information may affect the results. I show that whilst the impact on accounting bias is largely unchanged, the likelihood of an action is significantly different under the two systems. Finally, in Section 7, I discuss the welfare aspects and the implications of the results.