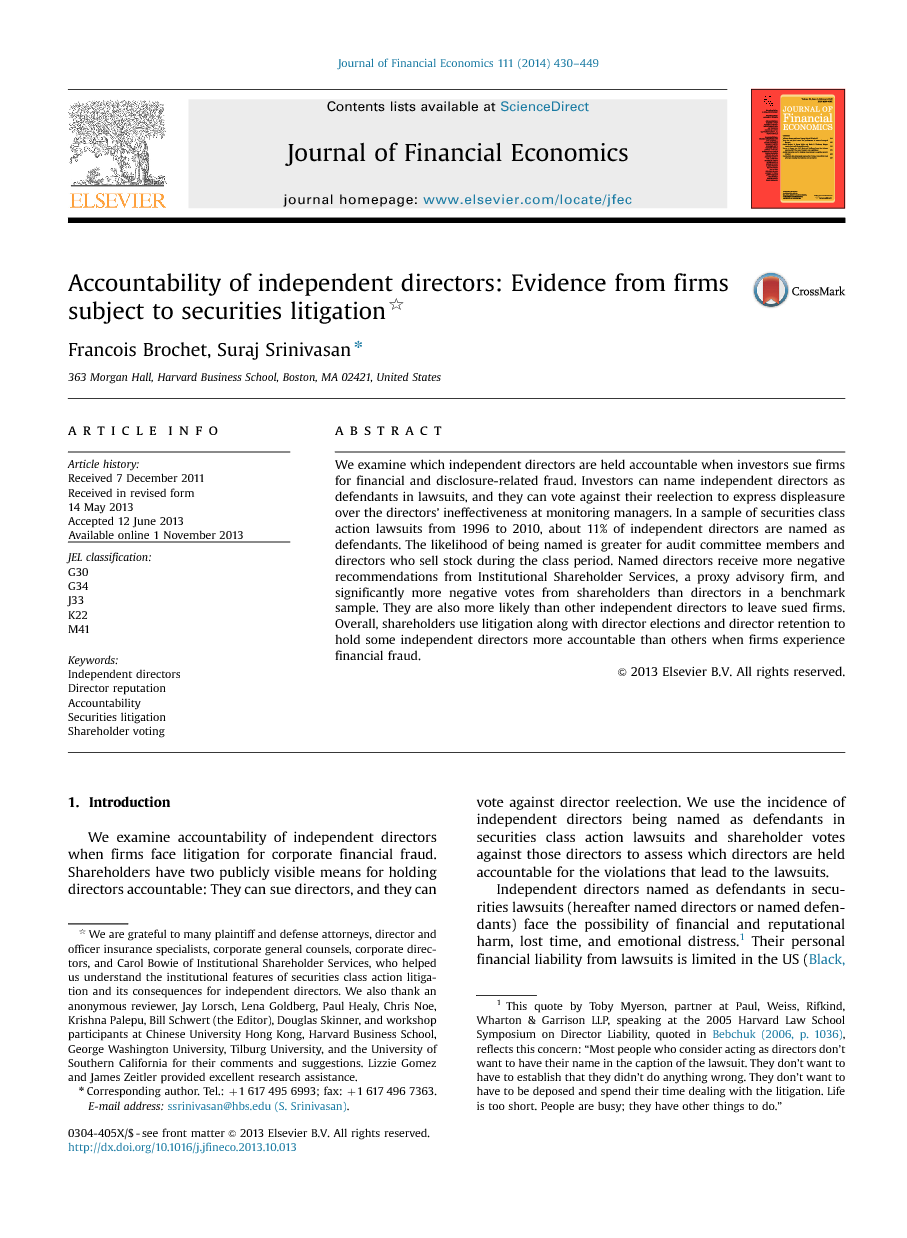 We examine which independent directors shareholders hold accountable for corporate financial fraud by looking at the incidence of directors being named as defendants in shareholder litigation, shareholder voting, and director turnover. We use a sample of firms that were sued for Securities Act violations under Rule 10b-5 or Section 11 claims between 1996 and 2010. We find that 11% of independent directors are named as defendants in securities lawsuits when the company they serve is sued. We further find that audit committee directors (consistent with concerns about litigation exposure of these directors) and those who sell shares during the class period are more likely to be sued. Besides accountability through litigation, shareholders in sued firms also hold independent directors accountable by voting against them, including a greater negative vote for named directors. Proxy adviser ISS recommends a greater negative vote against directors in sued firms, especially those who are named in the lawsuit. Directors of sued firms, and especially those who are named, are also significantly more likely to lose their board seats in the sued firm. This effect is more pronounced after 2002 than before, possibly reflecting greater sensitivity toward the role of corporate directors in recent corporate scandals. While Fich and Shivdasani (2007) show that lawsuits affect seats on external boards but not own-board turnover, our empirical findings suggest that at least part of this puzzle relates to whether a director is named in the lawsuit or not. Finally, our results suggest that outcomes vary when independent directors are named in lawsuits. When directors are named, cases are less likely to be dismissed, and they settle faster and for greater amounts. Some of our evidence points to the strategic naming of independent directors by the plaintiffs to gain bigger settlements. Overall, our results provide an empirical estimate of the extent of accountability that independent directors’ bear for corporate problems that lead to securities class action litigation. These results are useful for independent directors to assess the extent of risk they face from litigation, shareholder voting, and departure from boards of sued firms. While the percentage of named directors is small compared with the overall population of directors, individual directors can weigh their risk differently. From a policy perspective, our results provide insight on the role investors’ play in holding directors accountable for corporate performance.