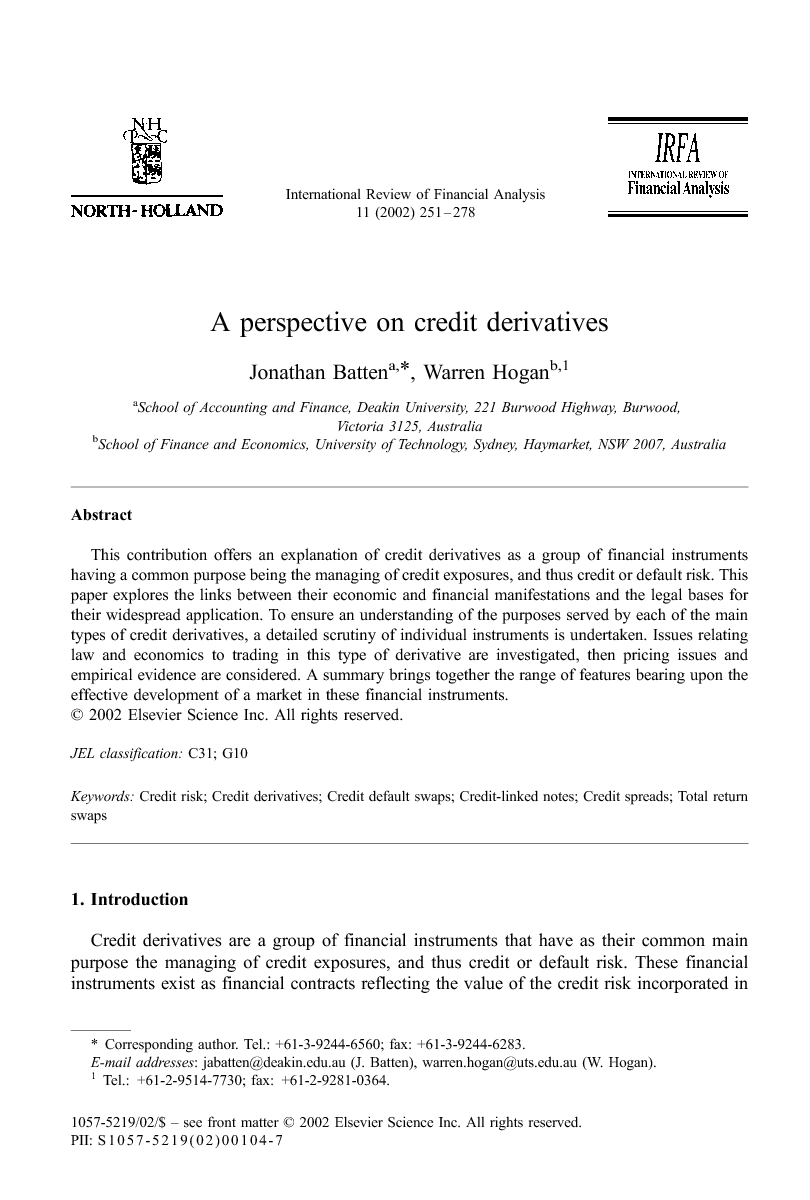 This contribution offers an explanation of credit derivatives as a group of financial instruments having a common purpose being the managing of credit exposures, and thus credit or default risk. This paper explores the links between their economic and financial manifestations and the legal bases for their widespread application. To ensure an understanding of the purposes served by each of the main types of credit derivatives, a detailed scrutiny of individual instruments is undertaken. Issues relating law and economics to trading in this type of derivative are investigated, then pricing issues and empirical evidence are considered. A summary brings together the range of features bearing upon the effective development of a market in these financial instruments.

Credit derivatives are a group of financial instruments that have as their common main purpose the managing of credit exposures, and thus credit or default risk. These financial instruments exist as financial contracts reflecting the value of the credit risk incorporated in each agreement between two parties. Each financial contract associated with one or other of the credit derivatives, of which there are a number, derives its value from the existence of a prior lending contract in which credit risk may be just one of some risk features. Others include foreign exchange and interest rate risks. The credit derivative market has grown rapidly since the British Bankers Association (BBA) estimated the London market for credit derivatives to be US$40 billion in 1996 with a global market estimated at US$100 billion (BBA, 1996). Later, Greene et al. (1998) placed the total market outstandings at three times this amount being US$300 billion. Notional outstandings provided by the US Office of the Comptroller of the Currency, reveal that US outstandings alone exceeded US$400 billion in 2001, with more than 400 financial institutions now using derivatives for risk management and trading. These statistics highlight the rapid deployment and acceptance of these instruments by financial market participants. The term “credit derivative” is a general term for a variety of financial instruments having a common purpose but not necessarily common features. Three building blocks drawn from forward agreements, swaps, and options are the bases for devising most credit derivatives. Forward agreements are based upon interpolated and implied interest rates from an existing term structure, while swaps allow the transformation, hedging and trading of fixed and floating interest exposures, while pricing usually assumes a zero net present value at the time the contracts are exchanged between the parties. An option is a contingent asset or liability whose value at any given time may be settled by the price of the underlying financial instrument, with the option value largely dictated by the underlying price volatility, contract time to maturity, and the option's out of the moneyness. However well understood the basis of the credit derivative, as one of several risk characteristics that may be stripped from a lending agreement, the question remains as to what purposes are served by this instrument. Any general explanation must lie in the capacity of one or more third parties to price the credit risk in the lending agreement over its maturity more effectively than the lender Marshall, 1997 and Morgan, 1997. Yet, this interpretation should be treated cautiously. For example, it may not necessarily be binding when the lending agreement is designed as a “loss leader” to attract other nonlending business. Also it is important to recognize the empirical evidence presented by authors such as Collin-Dufresene, Goldstein, and Martin (2001) who argue that other factors, such as liquidity, may override concerns over firm-specific factors, such as default risk, in terms of pricing. Credit risk has its ultimate expression in the inability of a borrower to repay a loan with subsequent declaration of bankruptcy and no recovery of the sum lent. This polar expression of credit risk is not what credit derivative instruments are intended to deal with though any one of them will recognize the possibility of that polar outcome. Credit risk is incurred whenever there is a decline in the ability of the borrower to repay the debt. Any decline changes the prospects of a borrower being able to repay, which means an increase in credit risk. Thus, the borrower in these new circumstances could be expected to have to pay more should new funds be sought or were the old contract due for renegotiation and rollover. For the lender, the deterioration in the borrower's perceived ability to repay will bring higher risk exposure for the same reward and an incremental reduction in the quality of the asset portfolio. Should there be a number of borrowers experiencing similar deterioration, then the lender's asset portfolio may be called into question with potential for increasing the costs of funding it. Hence, lenders have sound reasons for exploring all measures to preserve credit quality in asset portfolios. The particular feature of this contribution, and other work that follows in this and the previous special issue of the International Review of Financial Analysis is to offer an explanation of credit derivatives as a group of financial instruments having a common purpose, and to explore the links between their economic and financial manifestations and the legal bases for their widespread application. With security and certainty in the negotiation of contracts between parties in the over-the-counter market, comprising large financial institutions, it should be possible for trading to flourish to a point where there will be sufficient confidence in standardized contracts to allow the development of exchange-traded activities. This may take a long time to come to fruition. A step in this direction has already been achieved with the use of credit ratings devised by agencies such as Moody's and Standard and Poor's, to enable the ranking of companies by the level of their credit risk exposures. The paper is structured as follows. Initially, a detailed scrutiny of the group of credit derivatives to ensure an understanding of the purposes served by each of the main types now in place is undertaken. Then issues relating law and economics to trading in this type of derivative are investigated and pricing issues and empirical evidence are considered. A summary brings together the range of features bearing upon the effective development of a market in this new financial instrument.

Until recently, credit risk had not been addressed in any systematic way similar to what was the case with market risks. The analysis offered in this contribution and the other papers included in the two special issues on credit derivatives in the International Review of Financial Analysis provides some understanding of a new group of financial instruments, referred to as credit derivatives, and the connections between the workings of those instruments and the means by which they may be put in place effectively for the parties to a credit derivative contract. Credit derivatives encompass a number of instruments that either synthetically replicate the credit features of a loan agreement, or emulate the behaviour of a put option on credit-sensitive assets. These instruments have the capacity to transfer the credit risk associated with lending agreements, enabling the risk to be managed or traded independently of ownership of the underlying asset. However, the responsibility for managing the asset that has been stripped of its credit risk still remains with the lender. In other possibilities, entering into contingent contracts, which are off-balance-sheet, will offset the risk. Four main types of credit derivatives have been considered: credit swaps, credit-linked notes, credit spreads, and total return swaps, and issues associated with their use were highlighted. Attention has been directed to the circumstances that could lead to either the termination of a contract or the commencement of payments for the loss of value; this is the question of what constitutes an “event.” The legal issues treated in this paper have not canvassed related spheres including capital requirements and other related regulatory themes, taxation implications of the various techniques, and accounting provisions. These will take time to resolve and then reconcile between national constituencies; some may best be treated at an international level such as under the aegis of the Bank for International Settlements in Basle. Experiences from interest rate and foreign exchange swaps and other market derivatives point to many handicaps to the implementation of standardized documentation. Up to now most trades in credit derivatives have been tailor-made to the needs of those seeking credit protection while sellers of credit protection have greater experience with similar trades there being fewer of them. Hence, the prospect for a greater commonality across contractual arrangements seems unlikely to be realised without a greater volume of transactions. Pricing and empirical evidence was also presented with the strengths and shortcomings in theoretical models of default risk presented. The empirical evidence presented suggests significant steps forward in terms of modeling credit-spread behaviour and the applications of these new techniques for risk management. These derivatives have further possibility for relieving liquidity risk, as with total return swaps, to allow a more flexible approach to managing liquidity in an asset portfolio. As has been explained, these derivatives also provide a prompt means for adjusting risks associated with concentration in an asset portfolio whether it be for industrial and commercial, corporate, or regional origins. This leaves open the question of the obligations due to borrowers, as customers, in terms of what information might be due to them when the credit risk is sold off by the original lender. Overall credit derivatives bring much greater scope for shifting assets off the balance sheet and removing all or some of those features, which bring forth a need to meet capital requirements. Also credit derivatives have the potential to allow a much more flexible approach to managing risks associated with concentration. Many issues warrant further investigation, in particular, regulatory concerns, and matters of pricing and risk management.