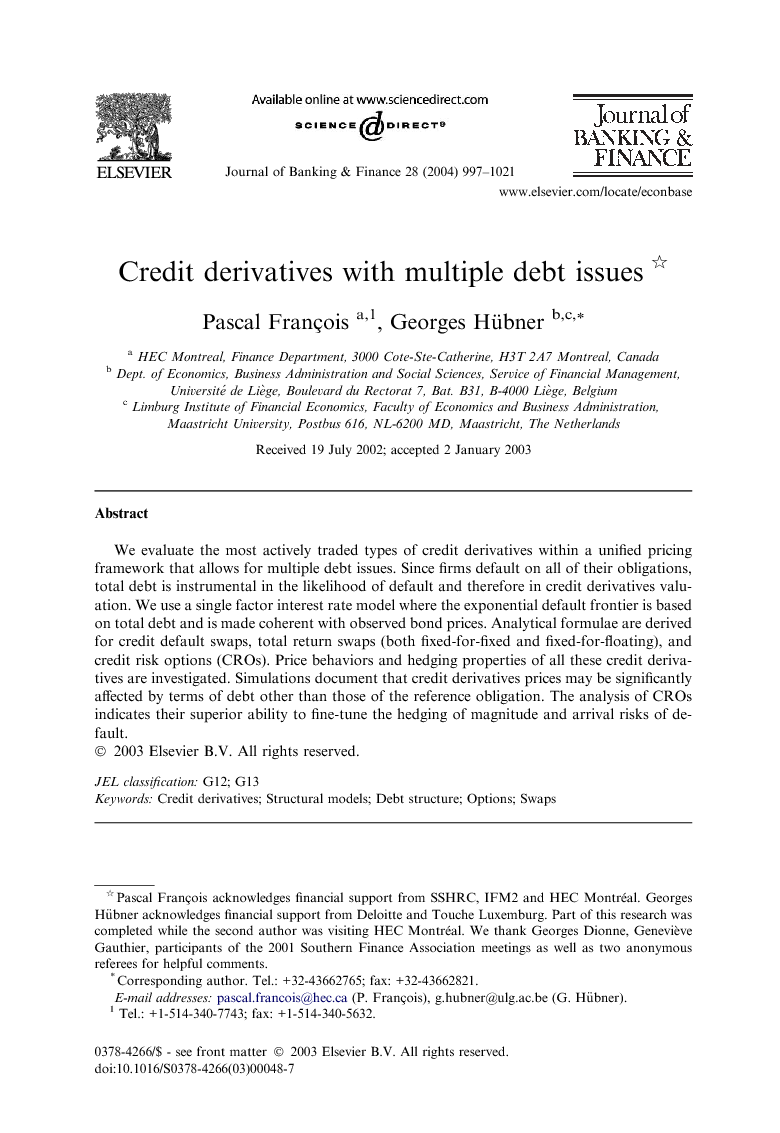 We evaluate the most actively traded types of credit derivatives within a unified pricing framework that allows for multiple debt issues. Since firms default on all of their obligations, total debt is instrumental in the likelihood of default and therefore in credit derivatives valuation. We use a single factor interest rate model where the exponential default frontier is based on total debt and is made coherent with observed bond prices. Analytical formulae are derived for credit default swaps, total return swaps (both fixed-for-fixed and fixed-for-floating), and credit risk options (CROs). Price behaviors and hedging properties of all these credit derivatives are investigated. Simulations document that credit derivatives prices may be significantly affected by terms of debt other than those of the reference obligation. The analysis of CROs indicates their superior ability to fine-tune the hedging of magnitude and arrival risks of default.

Our modeling of bond default risk with a structural form approach departs from a large body of the credit derivatives literature. However, the results proposed in this paper are obtained by relaxing some typical, yet disturbing assumptions of firm value models. We show that the focus on the broader corporate debt structure does not preclude analytical formulations for the value and behavior of the most standard credit derivative contracts. The pricing and hedging implications originating from this key element allow to emphasize the importance of several dimensions. Even for simple contracts like CDS or TRS, a contract designed on a particular corporate bond experiences very different price sensitivities with respect to the total interest payout, debt principal or corporate leverage. This finding proves to be crucial when considering any change in the liability structure that would leave the QDR unaffected. In particular, the very same phenomenon may lead to drastically opposite results on the credit derivative depending on the maturity of the underlying bond. The ignorance of terms of debt contracts other than the reference obligation would completely offset these issues. Rather, thanks to our integrative approach, such behavior differences outline the clear dependence of credit derivatives prices on broader corporate finance decisions. The ability to price more complex derivatives in the very same framework provides specific hedging properties associated with each of them. Of remarkable interest is the apparent complementarity of the fixed TRS, floating TRS and default CRO contracts. The first one can be viewed as a hybrid between the other two in terms of interest-rate risk and credit risk hedging properties. However, the option maturity of the default CRO provides an additional degree of freedom whose main consequence is the completely adverse influences of arrival risk and magnitude risk of default. A further look at term structures of downgrading CRO premia confirms that this type of contract enables to fine-tune hedging properties between default risk components. Our approach opts for a parsimonious modeling with closed-form expressions for credit derivatives prices and a limited number of parameters to estimate. A possible extension of our work could therefore give up on this analytical tractability in order to better track interest rate dynamics. If a two-factor model of interest rates were to be used, it would certainly be best to use the volatility of the instantaneous risk free rate as the second factor, i.e. σr in our model, as in the stochastic volatility term structure (SVTS) model proposed by Fong and Vasicek (1991) where the instantaneous risk free rate variance σ2r follows a positive mean-reverting process. In this realistic setting however, closed-form expression for default probabilities are no longer available. Thus, theoretical resolution of the model would require numerical methods to obtain credit derivatives prices. It is possible nevertheless to figure out some of the effects that a SVTS model would introduce on our results. Indeed, Fong and Vasicek (1991) show the volatility exposure for a zero-coupon bond is an increasing and concave (almost everywhere) function of maturity. Fundamentally, credit derivatives compensate for a possible default loss and their prices behave like the price difference between a riskless bond and its risky counterpart. Fong and Vasicek (1991) show that long-term and short-term riskless and risky bonds are affected by volatility risk in a comparable manner. Hence, the corresponding credit derivatives prices should be little affected by volatility risk. However, for middle-term maturities, the bond price sensitivity to volatility heavily depends on maturity. This is where the duration differential implies a high volatility exposure. Thus, credit derivatives prices may incorporate a non-negligible volatility premium for these maturities. As a further step for future research, the extent of this contribution has to be examined empirically. In this respect, the paper contains closed-form formulae and term structures analyses that are testable. The implementation of the Fong and Vasicek (1991) model would require the estimation of additional parameters (including the market prices of interest rate and volatility risks), which is certainly a relevant but challenging direction of further empirical investigation.