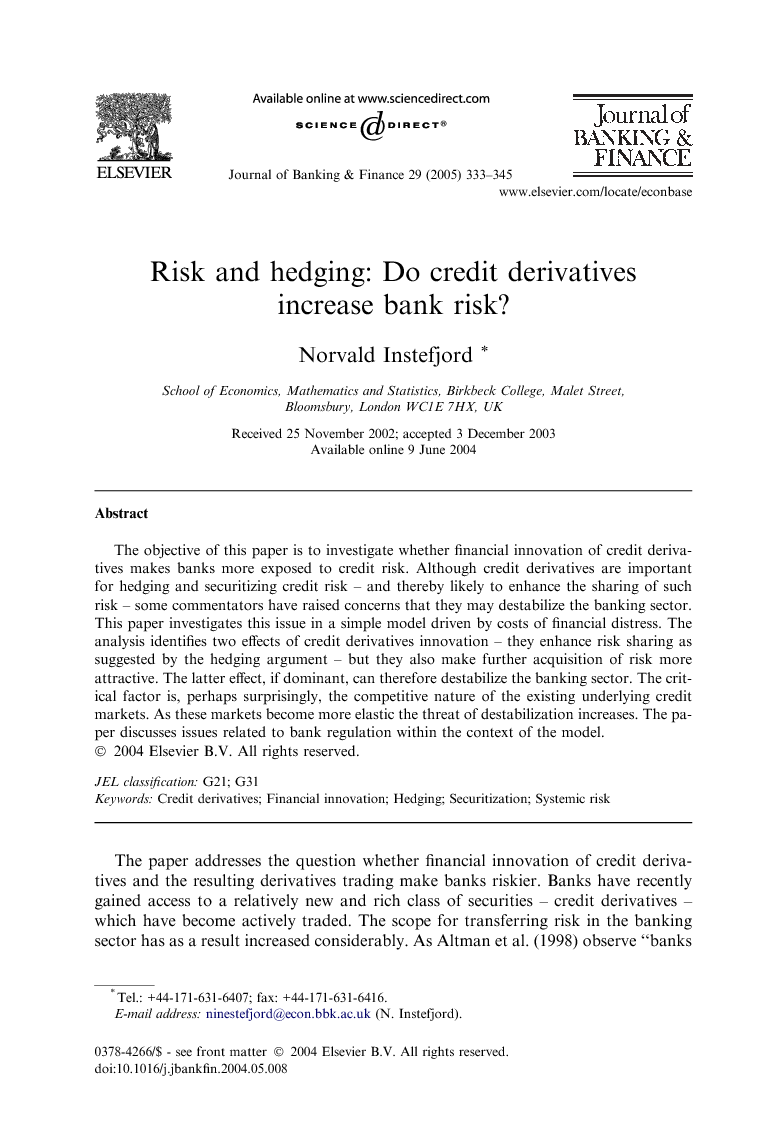 The objective of this paper is to investigate whether financial innovation of credit derivatives makes banks more exposed to credit risk. Although credit derivatives are important for hedging and securitizing credit risk – and thereby likely to enhance the sharing of such risk – some commentators have raised concerns that they may destabilize the banking sector. This paper investigates this issue in a simple model driven by costs of financial distress. The analysis identifies two effects of credit derivatives innovation – they enhance risk sharing as suggested by the hedging argument – but they also make further acquisition of risk more attractive. The latter effect, if dominant, can therefore destabilize the banking sector. The critical factor is, perhaps surprisingly, the competitive nature of the existing underlying credit markets. As these markets become more elastic the threat of destabilization increases. The paper discusses issues related to bank regulation within the context of the model.

Has the development of the market for credit derivative securities a destabilizing effect on the banking sector? The key finding is that a financial innovation in the credit derivatives market may increase bank risk, particularly those that operate in highly elastic credit market segments. Credit derivatives trading is, therefore, a potential threat to bank stability even if banks use these instruments solely to hedge or securitize their credit exposures. The paper discusses the regulatory response to this finding. Of crucial importance is the financial innovation process. Arguably, the success of a new credit derivative instrument is determined by its commercial success, i.e., how aggressively it will be traded. Since the credit risk linked to the elastic segments of the credit markets leads to more aggressive credit derivatives trading the direction of the financial innovation process is potentially also a threat to bank stability. The innovations that yield the most commercial success are precisely those that yield the minimum impact in terms of welfare. It is, therefore, a relevant question whether direct regulation of the credit market is warranted.