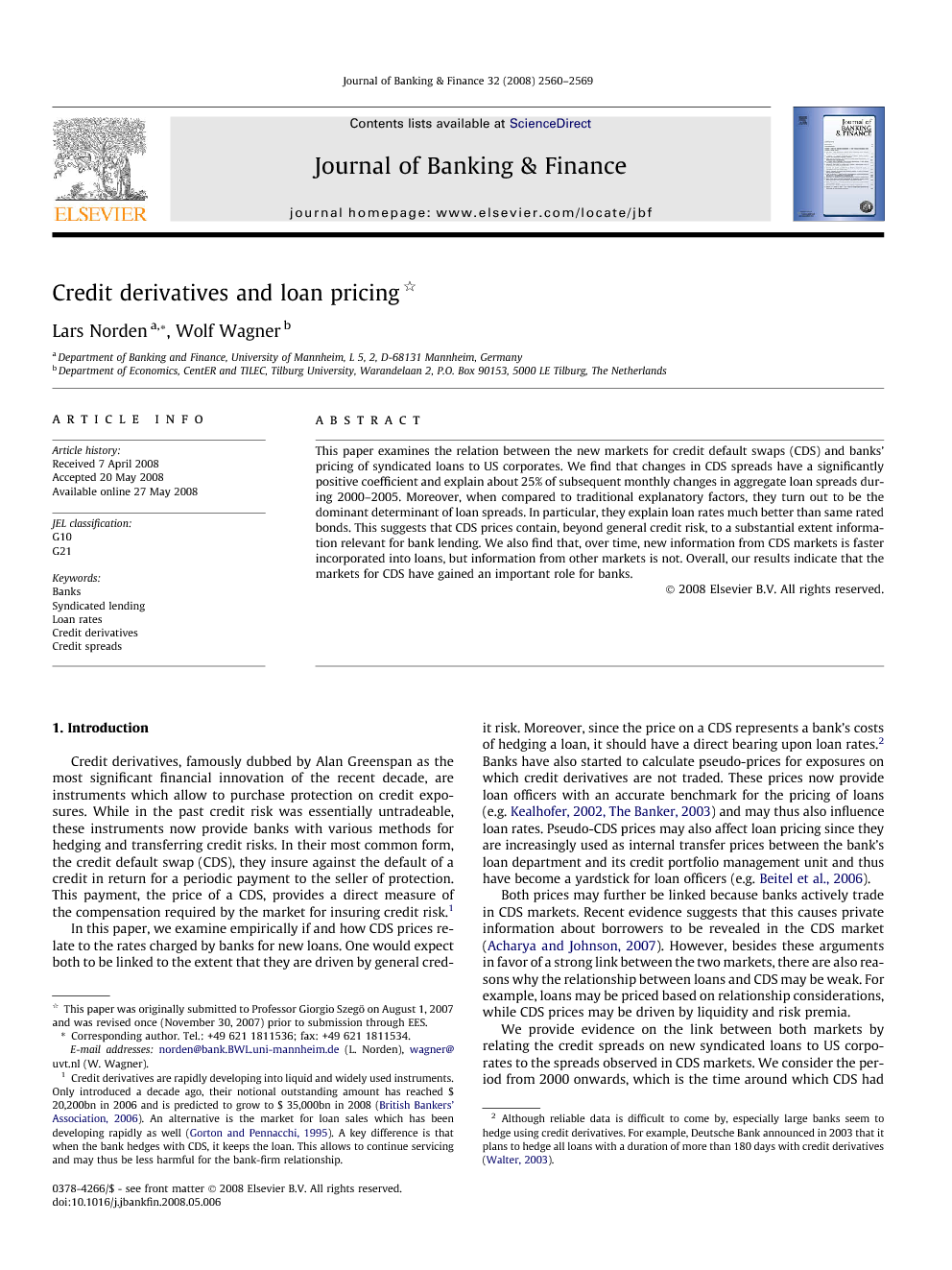 This paper examines the relation between the new markets for credit default swaps (CDS) and banks’ pricing of syndicated loans to US corporates. We find that changes in CDS spreads have a significantly positive coefficient and explain about 25% of subsequent monthly changes in aggregate loan spreads during 2000–2005. Moreover, when compared to traditional explanatory factors, they turn out to be the dominant determinant of loan spreads. In particular, they explain loan rates much better than same rated bonds. This suggests that CDS prices contain, beyond general credit risk, to a substantial extent information relevant for bank lending. We also find that, over time, new information from CDS markets is faster incorporated into loans, but information from other markets is not. Overall, our results indicate that the markets for CDS have gained an important role for banks.

The markets for credit derivatives have provided banks with new instruments for hedging and pricing loans. They have also given them an opportunity to trade on the information they have gained in the lending process. In this paper we studied the relationship between the markets for loans and credit derivatives. We found that prices on credit derivatives, as observed in credit default swaps (CDS), are strongly linked with the spreads on new syndicated loans. They have also become the dominant factor in explaining these spreads. In particular, CDS prices explain loans much better than the spreads on same rated corporate bonds, the natural alternative loan pricing benchmark. This suggests that CDS influence loan rates, for example because they represent the opportunity costs of taking on risk or because they are the new pricing benchmark. Alternatively, it may also suggest that banks play an active role in CDS markets, causing information relevant for lending decisions to be incorporated in the prices of CDS. We also found that, over time, loan rates reflect more current conditions in CDS markets, rather than being related to past CDS prices. However, at the same time, non-CDS information does not seem to get incorporated faster into loan decisions. This indicates that the presence of the CDS markets has influenced banks’ loan pricing behavior. Taken together, our results are thus suggestive of an important connection between loan markets and the new markets for credit derivatives. If loan rates continue to be more based on current conditions in CDS markets, this may lead to an overall more market-oriented pricing of loans. Such a development should be welcomed in that it may lead to a more efficient allocation of resources in the financial system. However, there are also downsides. For example, it may induce more volatility into the financing costs of firms. A more market-oriented pricing further suggests that banks may be less willing to subsidize firms which experience adverse credit conditions. This may impose significant costs for firms reliant on bank financing. There are also potential implications for financial stability. Banks have been credited with exercising a stabilizing influence over the business cycle since their loan decisions are less procyclical than market financing. An increasing dependence of loan rates on current conditions in CDS markets may reduce this effect and may potentially amplify business cycle volatility. Our study has analyzed the pricing of syndicated loans to US firms. Syndicated loans are typical for larger firms, for which relationship-based pricing arguably plays less of a role. An interesting question for further research would be to study how CDS markets interact with the pricing of loans which are based on strong bank-firm relationships, for example by studying loan rates in bank-based financial systems, such as Germany and Japan.