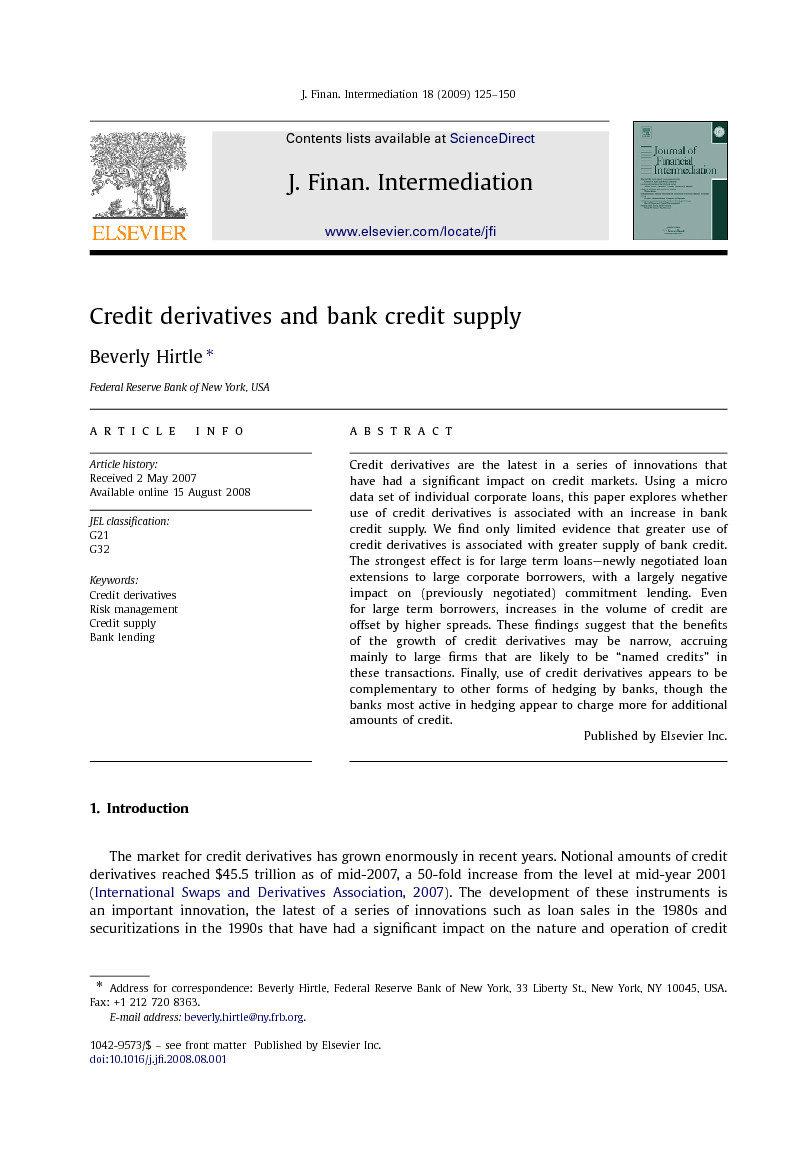 The market for credit derivatives has grown enormously in recent years. Notional amounts of credit derivatives reached $45.5 trillion as of mid-2007, a 50-fold increase from the level at mid-year 2001 (International Swaps and Derivatives Association, 2007). The development of these instruments is an important innovation, the latest of a series of innovations such as loan sales in the 1980s and securitizations in the 1990s that have had a significant impact on the nature and operation of credit markets. Like these earlier innovations, a key property of credit derivatives is that they separate the origination of credit, the funding of credit, and the holding and management of credit risk. This separation has implications for the distribution of credit risk across the financial system and, in turn, for the supply of credit. Banks that originate credit to corporate borrowers need no longer hold the credit risk associated with these loans, while other financial firms can hold credit risk without having to originate or fund the underlying credit. The risk diversification potential of credit derivatives has been widely discussed and acknowledged. But a follow-on question is whether greater risk diversification, both within the banking industry and between banks and other financial institutions, has led to an increase in the supply of credit. To what extent has the ability to spread credit risk outside the banking system allowed banks to originate and hold more credit? Have banks used the diversification potential of credit derivatives to reduce their overall risk exposures, or have they “undone” diversification-related risk reductions by expanding their loan portfolios? If credit supply has expanded, which borrowers have benefited? Research examining earlier credit market innovations such as loan sales and securitizations has generally found that banks have used opportunities to diversify credit risk exposures to increase lending (Cebenoyan and Strahan, 2004, Franke and Krahnen, 2005 and Goderis et al., 2006). This paper extends this previous work by examining the impact of banks' use of credit derivatives on their credit supply. Using a confidential data set of thousands of commercial and industrial (C&I) loans made by a sample of U.S. banks between 1997 and 2006, we look at how the volume of new loans changes as a bank purchases more protection through the credit derivatives market. A key advantage of this data set is that we can look not only at the volume of credit provided, but also at lending terms and the characteristics of the new lending, including credit spreads and the maturity of loans. We can also separate the loans by borrower size (proxied by the size of the loan) and by the type of lending arrangement (term lending versus lending under previously negotiated commitments). Finally, we can distinguish between banks that appear to be active hedgers using other forms of derivatives and those that do not do significant amounts of hedging. We find only limited evidence that banks increase the supply of credit as they obtain additional protection through credit derivatives, and then only for certain types of loans and borrowers. For both large and small commitment borrowers and for small term borrowers, the direct effect of increased credit derivatives protection on the volume of new loans is actually negative. New lending to these borrowers decreases as banks increase credit derivatives protection. In contrast, new loans to large term borrowers appear to increase as banks take on more net credit protection via credit derivatives. When we examine loan maturity and spreads, the picture is similar. For loans made under commitment and for small term loans, average maturity either decreases or is unchanged as credit derivatives protection increases. For commitment loans and for small term loans, neither the amount of lending nor the terms of that lending suggest an increase in supply (if anything, somewhat the opposite). For large term loans, in contrast, the impact on lending terms is more consistent with an increase in credit supply: average maturity is unchanged and spreads fall at banks that do not hedge actively, while at active hedging banks, maturity increases (though so do spreads). Thus, the evidence of increased credit supply is stronger for large term loans, though even here the evidence is somewhat mixed, as some forms of additional credit supply—longer maturities—appear to come at the expense of higher spreads at actively hedging banks. The term loan results may be the most relevant for assessing the impact of credit derivatives on new credit supply, since lending terms on commitment loans may reflect arrangements that were negotiated months, or even years, prior to the loan extension, and the timing and size of extensions is largely determined by borrowers. Further, since large firms are more likely to be “named credits” in the credit derivatives market, the findings suggest that the benefits of credit derivatives may accrue mainly to these firms, rather than being spread more broadly across the business sector. The remainder of the paper is organized as follows. The next section reviews previous work on credit derivatives and other credit market innovations on the supply and terms of credit. Section 3 discussed the confidential loan data and empirical specification used in the analysis, while Section 4 presents the key results. Section 5 concludes.

This goal of this paper is to examine the relationship between banks' use of credit derivatives and the supply of bank credit. Credit derivatives represent an important credit market innovation that, in theory, allows banks to originate and fund loans without holding the associated credit risk. More broadly, credit derivatives are the latest in a series of innovations that have facilitated credit risk management and made it easier for banks to diversify their credit risk exposures. The key question is whether banks have used these instruments primarily to diversify and thus reduce their risk exposures, or whether banks have undone the diversification by expanding their lending. Research on earlier credit market innovations has found that activities such as loans sales and securitizations have not resulted in overall reductions in bank risk, but rather an expansion of lending. Such an increase is credit supply would be an important consequence of the recent rapid growth of the market for credit derivatives. We find limited evidence supporting the idea that banks increase the supply of credit as they obtain additional credit protection through credit derivatives, with the strongest results for large term borrowers. Commitment borrowers do not appear to benefit greatly from increased use of credit derivatives by their lenders. These results suggest that the benefits of increased credit derivatives protection are relatively narrow, in the sense that they accrue mainly to the type of borrower most likely to be a “named credit” in a credit derivatives transaction. It is further interesting to note that the positive impact of credit derivatives protection for these borrowers is primarily on the amount of lending—increases in new loan volume and longer loan maturity. The results for spreads suggest that this increase in volume sometimes comes at higher prices, especially at banks that are active hedgers in other areas.